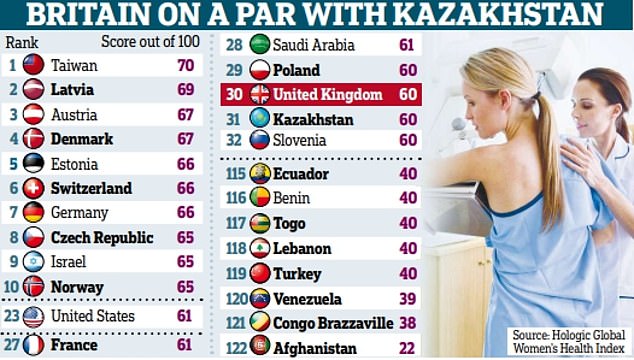 
League table shame of UK women’s healthcare: We languish behind Saudi Arabia in global list… and treatments are on a par with Kazakhstan

By Rosie Taylor for the Daily Mail

Women’s healthcare in the UK is worse than in some countries with poor records on equality, including Saudi Arabia and China, a poll has found.

The UK has ranked lower than most comparable Western countries, including the US, Australia, New Zealand, France and Germany, in the 2021 Hologic Global Women’s Health Index published today.

Analysts blamed this on British women struggling to access preventive care, such as cancer screening, as well as diagnosis for causes of pain and mental health support.

The UK scored just 60 out of 100 – three points lower than last year – in the index, which is based on a survey of more than 127,000 people worldwide by analytics firm Gallup. This places it on a par with Kazakhstan, Slovenia, Kosovo and Poland. Ireland also scored 60 points.

The UK has ranked lower than most comparable Western countries including the US, Australia, New Zealand, France and Germany

While the global average was lower at just 53 out of 100, most Western nations ranked higher than the UK, which was 30th on the list of 122 countries and territories. Taiwan was top, scoring 70, and Afghanistan bottom with 22.

The Government has been accused of ‘consistently deprioritising’ women’s health after it was reported in December that gynaecology waiting times in England had tripled in a decade. On average, women now wait nearly four months for a first appointment with a gynaecologist – but nearly 38,000 women in England have waited more than a year.

The UK’s score for women’s emotional health fell eight points in a year to 68. On preventive care, such as cancer and diabetes screening, the UK scored just 23.

A separate Hologic survey of 10,000 people in the UK found one in five British women experienced pain daily but more than a quarter had not been able to get a diagnosis at all. Some 15 per cent got one only after eight or more visits to healthcare professionals.

On preventive care, such as cancer and diabetes screening, the UK scored just 23

Women who suffered with pain needed to see a doctor 4.3 times on average before the cause was diagnosed.

Dr Nighat Arif, a GP specialising in women’s health, said: ‘Sadly, often [women’s pain is] seen as something to put up with, rather than something you can get support for.

‘The reasons for pain in women are complex, and for GPs, who have a limited time for consultation, it can be difficult to pinpoint a diagnosis in one appointment.’

The Department of Health said: ‘We have put women’s health at the top of the agenda by publishing the Women’s Health Strategy for England, appointing the first-ever Women’s Health Ambassador and taking action to increase supply and reduce the cost of hormone replacement therapy.’