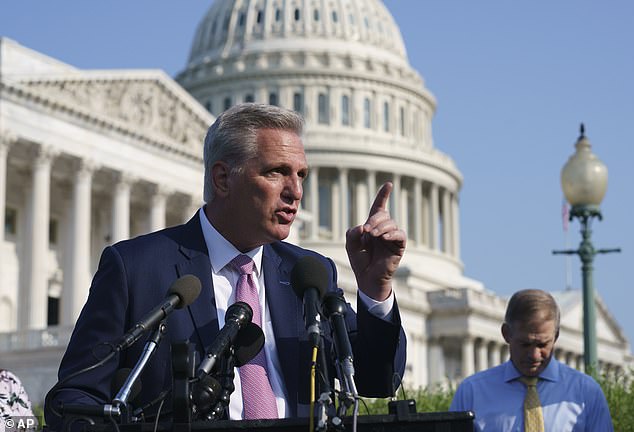 
House Republican Leader Kevin McCarthy on Monday slammed Twitter for trying to ‘silence’ diversity after the platform banned Rep. Marjorie Taylor Greene, Ga., for what it described as ‘Covid misinformation.’

‘Diversity of opinion is the lifeblood of our democracy. And yet that fundamental American value is under assault by Big Tech—entities that have amassed more power and more control over more speech than any other institution in history,’ McCarthy, R-Calif., said in a statement.

‘Their recent decisions to silence Americans — including a sitting member of Congress and renowned physicians — who share views different from the political and media elite have real world costs.’

‘In fact, as we get more information on the virus it is clear many of the views once demonized by technology companies and the political elite are turning out to be true. The doctrines of lockdowns, school closures, and the threat of covid-19 illness according to age groups and previous infection are currently being reversed,’ said McCarthy.

‘Americans on the political left, including popular cable news hosts, members of Congress, and even the Vice President have themselves made public comments that are now universally understood to be false. Yet, they face no repercussions from the gatekeepers of America’s town square.’

Her final tweets show her railing at what she blasted as government overreach about COVID and discussing how life had changed since the virus hit US shores.

This is the fifth strike for Greene, who was last suspended in August for saying that vaccines were ‘failing’ to reduce the spread of COVID and that the FDA shouldn’t have approved them.

She got her third strike in July after tweeting that COVID wasn’t dangerous. She was also suspended in January, days after the Capitol riot, for tweets echoing conspiracy theories about voter fraud in her home state of Georgia.

‘Their recent decisions to silence Americans — including a sitting member of Congress and renowned physicians — who share views different from the political and media elite have real world costs,’ McCarthy said

Two or three strikes earn a 12-hour account lock; four strikes prompt a weeklong suspension, and five or more strikes can get someone permanently removed from Twitter.

In a statement released by her office, Greene said she was suspended for sharing a tweet citing numbers from the Vaccine Adverse Event Reporting System, a self-reporting tool for vaccine side effects managed by the Centers for Disease Control and the Food and Drug Administration.

In a lengthy Twitter thread on Saturday, she posted a graph showing a reported 18,000 deaths from the COVID-19 vaccines, according to VAERS data.

‘Before Covid, Reported deaths from vaccines were taken seriously and dangerous vaccines were stopped. After Covid, Extremely high amounts of covid vaccine deaths are ignored and government forced vaccine mandates increase,’ she said.

VAERS allows anyone to report side effects after receiving a COVID-19 vaccine. Government health official have warned that the data is being misused and misinterpreted, given that anyone is able to submit a report.

Reports of side effects or deaths caused by the COVID-19 vaccine on VAERS do not prove that negative outcomes were related to the vaccine itself.

Last month, Greene, 47, compared COVID to cancer in a four tweet thread calling for Americans to take a more laid back attitude to the virus.

‘Every single year more than 600,000 people in the US die from cancer. In 2021, an estimated 608,570 people will die of cancer in the United States. The country has never once shut down. Not a single school has closed.

‘And every year, over 600,000 people, of all ages and all races, will continue to die from cancer.

‘More have died in 2021 from covid than 2020 in spite of Gov mandated widespread vaccines, mass public masking, & trillions spent.

Greene has also taken repeated aim at White House COVID tsar Dr Anthony Fauci, and even shared snaps of herself wearing a face mask emblazoned with the words ‘Fire Fauci.’

Greene tweeted in August that the FDA should not approve the COVID vaccines because there were ‘too many reports’ of breakthrough cases. Twitter marked the tweet misleading and blocked users from interacting with it

Twitter has a five-strike policy for users who spread COVID-19 misinformation. The latest strike appears to have been her last

Other House Republicans went after Twitter for banning Greene.

‘Welcome to the Woketopia. Where information is controlled by the few,’ Rep. Matt Gaetz, R-Fla., tweeted.

Rep. Lauren Boebert, R-Colo., said Republicans ‘WILL be holding’ tech companies ‘accountable’ if the party takes back the House majority in the fall.

In 2017, she called the internet-born conspiracy theory QAnon, whose believers follow the words of an alleged government insider nicknamed Q, a ‘once-in-a-lifetime opportunity to take this global cabal of Satan-worshiping pedophiles out,’ according to the Tampa Bay Times.

They’ve now permanently suspended a sitting member of US Congress.

Of course, both from the same party.

They forget that in 2022 we are taking back the House and we WILL be holding them accountable!

In February 2021, she said in a speech on the House floor that she stopped believing in the conspiracy theory once she found ‘misinformation, lies, things that were not true’ in QAnon posts.

On Sunday, the first-term congresswoman pointed the finger at her colleagues, suggesting Twitter has a double standard.

‘Maxine Waters can go to the streets and threaten violence on Twitter, Kamala and Ilhan can bail out Black Lives Matter terrorists on Twitter, CNN and the rest of the Democrat Propaganda Media can spread Russia collusion lies, and just yesterday the Chief spokesman for terrorist IRGC can tweet mourning Soleimani, but I get suspended for tweeting VAERS statistics,’ she said.

Statistics from the self-reporting vaccine side effect database are often cited by conservative commentators like Tucker Carlson to downplay the effectiveness of vaccines.

The secular festival of African American culture is celebrated each year from December 26 to January 1.

‘Stop. It’s a fake religion created by a psychopath,’ Greene wrote back on Twitter. ‘You aren’t bringing in new voters, you are turning them away. People are tired of pandering and BS.’

Share. Facebook Twitter Pinterest LinkedIn Tumblr Email
Previous ArticleA Covid-19 survivor came out of a coma after 65 days. Now she supports vaccinations
Next Article I won’t be the one to apologize – Activist Amara the Lesbian reacts to former lesbian partner, Uyai Ikpe-Etim’s allegation of being abusive during 3-some (video)