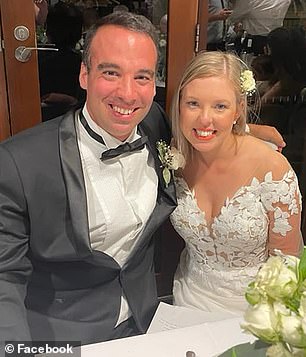 Julian Carbone married his wife this year, above, a happy snap

A local councillor who sent a 17-year-old girl an ‘inappropriate’ Instagram message about her bikini photos shared pictures from a beach trip with his family that same weekend.

Julian Carbone, who sits on Burnside Council in Adelaide‘s east, sent the teenager a message over Instagram about 5am on Saturday, November 27, an official council report found.

The young woman had posted a series of pictures to social media leading Cr Carbone to slide into her DMs and quip: ‘Lots of bikini photos – but it’s so damn cold at the moment hey.’

Daily Mail Australia can reveal that, just hours after sending the message, the local member uploaded his own snaps from a trip down the coast – including a picture with a mate in Port Elliot, in the state’s south, and later that same weekend, a photo of his then-girlfriend and their infant son on his first trip to the beach.

Cr Carbone has defended the message – which investigators found was ‘inappropriate’ – with his lawyers denying the 17-year-old’s assertion that she was underage when he sent it, according to council documents.

‘The Complainant’s assertion that she is underage is wrong as a matter of law in relation to sexual conduct,’ the report reads. Cr Carbone’s lawyers noting the legal age for sex in South Australia is 17.

His lawyers complained to the investigators that the young woman had ‘taken what is otherwise an innocent message (send by mistake and without context) and attempted to manipulate the reader into believing Cr Carbone is a paedophilic ‘predatory male’ (which he is not)’, council documents said.

Just hours after sending the ‘inappropriate’ message to the teen, the local member uploaded his own holiday snaps – capturing his infant son’s first trip to the beach (pictured)

Cr Carbone’s lawyers added: ‘Sending an innocent message without context and by mistake does not constitute being “targeted”,’ the letter states.

The councillor sent the 17-year-old girl a message (pictured) saying: ‘Lots of bikini photos – but it’s so damn cold at the moment hey’

‘The criminal law is clear that 17 years old is the age of consent to engage in sexual activity as an adult.’

Daily Mail Australia can reveal Cr Carbone is due to learn his fate on Tuesday as his colleagues reflect on the findings of the report – which cost Adelaide taxpayers $11, 585.

Burnside Council Chief Executive Officer Chris Cowley said the council will consider the outcomes of the investigation into the Code of Conduct matter on Tuesday.

‘Burnside Council has in place a Code of Conduct with which all at Council, including Council members, must comply,’ he said in a statement.

‘Council will consider the investigation report and associated recommendations. Until then, we cannot comment further on this matter.’

Mayor Anne Monceaux told Daily Mail Australia that she was unable to comment at this time.

The teenager later alleged that the politician also ‘followed’ a concerning number of young females on his Instagram account (pictured, one of the accounts raised in the report)

The investigation was launched after the teenager made a formal complaint to the council in December, sparking a probe into whether Mr Carbone had breached its code of conduct.

In an email to the Burnside Council the 17-year-old said she was looking through her messages and found one from ‘@juliancarboneburnsidecouncil’.

‘As a 17-year-old girl I am really concerned about this,’ she wrote, according to the report.

She later added that it was inappropriate coming from a public official. The teenager later alleged that the politician also ‘followed’ a concerning number of young females on his Instagram account.

The 17-year-old said she believed ‘community trust and confidence would be significantly eroded in the knowledge of a council member who communicates with minors on Instagram in relation to photos of them in bikinis.’

The Council referred the complaint to their lawyers, Norman Waterhouse, who passed the investigation to another Adelaide law firm, Mellor Olsson. Cyber security expert Mark Gare was then enlisted to investigate whether the councillor had personally sent the message.

During an interview, Cr Carbone claimed the message was sent ‘to the wrong person’ and that it may have happened as he had gotten Facebook and Instagram’s messaging applications ‘mixed up’ while looking at ‘beach scenes’.

He also claimed someone may have had possession of his phone and sent the message as a joke, or that his ‘phone could have been hacked’, although the report noted he had never suffered any other issues that would lead him to think he was a victim of hacking.

When asked about whether he followed a ‘concerning’ amount of underage women on Instagram, Cr Carbone argued that as a local member ‘he takes a keen interest in supporting young people and families’.

If he did follow a ‘concerning’ number of young people it was ‘in an attempt to generate community trust’, he argued.

However, the report ultimately rejected the councillor’s claims and concluded that he had in fact sent the message to the teenager.

It also rejected the his contention that he had only been trying to initiate a conversation about the weather: ‘We do not accept this position.’

Cr Carbone is pictured with his wife and infant son, who was born in May, 2021

The report stated that a conversation about the weather is ‘not typically prefaced by comment about bikini photographs’.

Cr Carbone had denied he followed a ‘concerning’ number of ‘under-age people’ and argued that: ‘in any event, as a councillor, he takes a keen interest in supporting young people’.

However, the investigation concluded that Cr Carbone follows a number of Instagram accounts considered ‘inappropriate’ in his work environment, with those accounts featuring young girls in bikinis and gym clothes.

The report did add that Mr Gare had found ‘no evidence of Cr Carbone having any inappropriate interactions with minors’.

In March, the councillor married his wife Angela at the Mt Osmond Golf Club, two years after they met online during the Covid-19 pandemic

The report has advised Cr Carbone (pictured with his wife and son) to stop using the Instagram account, apologise to the teenager and the council and attend social media training

Councillor Carbone told investigators that he could not recall sending the message, and said there were a few reasons it may have came about:

According to the report, these included:

1. That ‘there was an error and the message was sent to the wrong person. Tied in with this was the possibility that he was on Facebook looking at beach scenes/pictures, somehow Instagram came up and he got the two messenger applications mixed up and sent a message on Instagram by mistake rather than to a contact on Facebook.’

2. In the alternative, ‘someone else might have had his phone and sent the message as a joke’

3. In the further alternative, his phone could have been hacked, although he noted that he has not experienced any other issues which would cause him to think that his phone had been hacked. The message was sent from his Instagram account

It recommended the local member issue a written apology to the teenager and the Burnside Council for sending the message.

It was also advised Cr Carbone to stop using the Instagram account due to it not being an official Burnside Council account and attend social media training.

The investigation to date has cost Adelaide taxpayers $11,585.

In March, the councillor married his wife Angela at the Mt Osmond Golf Club, two years after they met online during the Covid-19 pandemic.

Cr Carbone took to Facebook on Monday to share a family photo with his wife and son and thank those who had sent messages of support.

‘I’m incredibly humbled by all the phone calls and messages of support we have received over the past 24 hours, especially by those who know what it’s like to operate in the (at times) vulnerable political space,’ he wrote.

‘These dark days do challenge us and question us why we do what we do for our community, but we are reminded of the greater good we provide. The hours, time, frustration all for the sake of making our small part of the world better.’

In an official statement, the councillor said it was the ‘biggest misunderstanding I have ever come across in my 20-year association with Burnside Council’.

‘Quite simply, the message was sent in error, she was not the intended recipient, and unfortunately I simply don’t have the time to assess each and everyone of my Instagram followers on whether they are in fact true or fake accounts.

‘The whole investigation was punching at shadows and was quite frankly, unnecessarily nasty.’

‘This is the biggest misunderstanding I have ever come across in my 20-year association with the City of Burnside.

‘Quite simply, the message was sent in error, she was not the intended recipient, and unfortunately I simply don’t have the time to assess each and everyone of my Instagram followers on whether they are in fact true or fake accounts.

‘The whole investigation was punching at shadows and was quite frankly, unnecessarily nasty.

‘Some of the comments were extremely hurtful to myself and my young family.

‘It is sad and unfortunate that the complainant rejected the offer to meet with me, which would have allowed me to explain that the message was sent in error.

‘This offer was rejected and unfortunately she pushed for a full, lengthy and costly investigation. All of this could have been easily avoided.

‘As for the fake Instagram accounts, I find this tacky.

‘As a husband and a father, clearly my social media is designed to keep my residents informed and engaged on local issues, so I have no intention of using it for this kind of unsavoury and crude behaviour. These accounts are clearly fake and the only reason I followed them back is because they followed me first, and without much investigation, assumed they were a local resident.

‘Overall, this whole process has been sad, cruel and unnecessary.

‘We all make clerical mistakes and often send the wrong message to the wrong person, but it’s a timely reminder for us to be pleasant to one another and treat each other with respect and not be too quick to draw conclusions.

‘Having said all that, I commend the complainant on her commitment towards social issues and I look forward to her perhaps getting more involved in local government.’