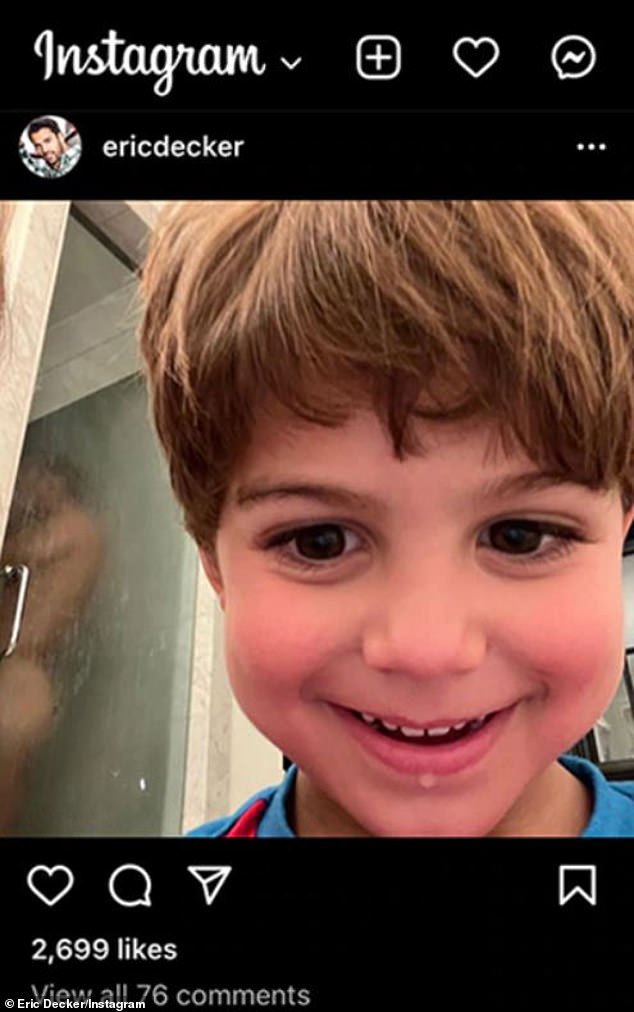 By Christine Rendon For Dailymail.com

A former NFL star is claiming that his son posted a naked picture of him in the shower even though his country music star wife can be partially seen in the frame.

Eric Decker, 35, and Jessie James Decker, 34, say their 4-year-old son, Forrest, took the selfie with his father naked in the shower behind him before accidentally posting it to Instagram on Monday night for all to see.

In the snap, the young Decker grinned for the camera as his unsuspecting father rinsed off in the background.

The couple said they weren’t aware of the R-rated photo until a friend sent Jessie a screenshot. The post had already garnered thousands of likes and comments before it was taken down.

But some noticed strands of blonde hair on the edge of the frame, leading them to wonder if the child actually took the picture or if mom Jessie was behind the camera.

A friend sent a screenshot to Jessie who posted about it on her story.

‘No I can’t stop laughing Jessie. I can’t,’ she texted Jessie. ‘I am not even sure if u know he has his phone but if u don’t know go grab,’ she added.

She posted a screenshot of their text exchange to Instagram, where she added a laughing crying emoji.

Addressing the kerfuffle on his Instagram Stories, Eric posted: ‘Time to change the code… so much for letting Forrest watch his Avengers videos during my shower.’

‘Go grab’: A friend alerted Jessie to the snap via text message

‘Time to change the code’: Decker addressed the kerfuffle on his Instagram Stories

Eric didn’t seem particularly panicked in his statement, and perhaps that’s because fans have already seen him in the buff before.

In September 2020, he shared a photo of himself reading a copy of his wife’s new cookbook Just Feed Me naked.

‘It’s bigger, better and tastier than what you could ever imagine……I’m talking about my wife’s amazing new cookbook “just feed me” It’s officially out now!’ he suggestively captioned the photo.

Not his first nude! In September 2020, he shared a photo of himself reading a copy of his wife’s new cookbook Just Feed Me naked

‘What happens in Cabo’: Decker posted a photo of her husband in his birthday suit as she celebrated his 35th birthday earlier this year

Jessie also posted a photo of her husband striking a pose in his birthday suit in celebration of his 35th birthday earlier this year.

‘The birthday boy In his birthday suit lookin like a statue from Greece,’ she captioned the shot, taken in Cabo San Lucas. ‘My man is 35 and aging like fine wine. Happy happy birthday to the love of my life, my best friend, my soulmate, my baby daddy, my ride or die. I’m so happy you were born today. I sure do I love growing old with you,’ she concluded, along with several hashtags including ‘what happens in Cabo.’

The country songstress married Eric in 2013, and last month they celebrated their nine year wedding anniversary during a sun-soaked getaway to Capri, Italy.

‘Mi amor. We’ve been looking forward to this for a year, happy anniversary month baby [heart-eyes emoji] 9 years married next week!’ she captioned the snap.

Jessie and Eric were introduced by mutual friends and married two years later.

Family of five: The couple wed in 2013 and share three children: daughter Vivianne, eight, and sons Eric Jr. and Forrest, six and four

Love is in the air! Jessie and Eric were introduced by mutual friends and married two years later; pictured April 2022