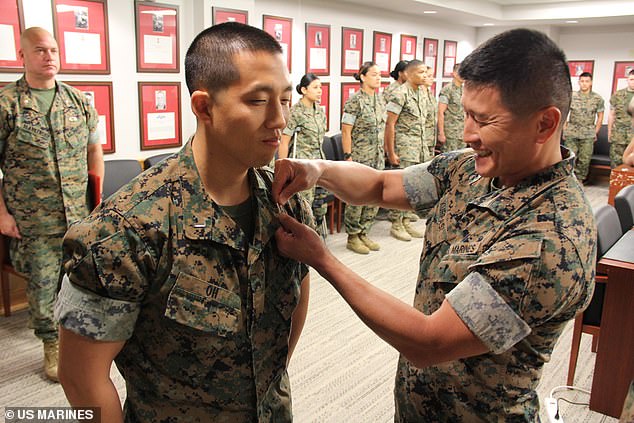 
A third U.S. citizen is believed to be missing after traveling to Ukraine.

He had been living in Wilmington, North Carolina, before leaving for the eastern European country.

Captain Kurpasi had only recently retired from the U.S. military in November 2021, having served in the US Marine Corps for 20 years.

U.S. Marine veteran Ret. Captain Grady Kurpasi, right, left for Ukraine in March. He had retired in November 2021 and was staffing a post which came under fire in April. His body has not been found

Kurpasi had arrived in the country on March 7 and was in the capital by March 21. He was last heard from around April 23 and 24

He decided to volunteer alongside Ukrainians in Ukraine but did not see himself fighting on the frontlines, ac family friend said.

‘For him personally, he has a skill set that he feels he can give back,’ George Heath told CNN. He wanted to go and help the Ukrainian people. He wasn’t really planning on fighting.’

Kurpasi had arrived in the country on March 7 and was in the capital by March 21. He  was last heard from around April 23 and 24 according to Heath.

By the end of April he was tasked with tasked manning an observation post near Kherson. It was around that time, he stopped communicating with those back in the U.S.

It’s believed the post he was at came under ‘small arms fire’ on April 26.

Kurpasi went to investigate what was happening along with another soldier and left the observation post before radioing to the Ukrainian military to fire back.

‘It was the last time anyone heard from him,’ Heath explained.

‘His goal was not to be in firefights doing stuff like that,’ Heath added. ‘It just ended up being that way in the end.’

Kurpasi’s body has not been found.

Meanwhile, the United States government has said it has not yet asked Russia about two other Americans reportedly captured after going to the country to fight Russian forces.

‘As of today, we have not raised this yet with the Russian Federation … (We) haven’t seen anything from the Russians indicating that two such individuals are in their custody,’ U.S. State Department spokesman Ned Price told reporters, describing reports about the two men as unconfirmed.

Alexander Drueke, 39, of Tuscaloosa, Alabama, and Andy Huynh, 27, of Hartselle, Alabama, went to Ukraine as volunteer fighters against Russian forces, have been missing for a week, and are feared captured, family members have said.

The name and details of the third missing U.S. citizen has so far not been revealed.

Alexander Drueke, 39, (left) and Andy Huynh, 27 (right), were taken prisoner by Russian forces last week on the outskirts of Kharkiv

Drueke (left) served in Iraq for the US Army. Huynh (right) was in the Marines for four years and spent two years on a base in Japan but he had never been in active combat before he joined the effort in Ukraine

The U.S. military said the two men had served in the U.S. armed forces in the past – Huynh for the Marine Corps and Drueke in the Army Reserves – but provided no information about their current whereabouts.

The U.S. military has repeatedly denied U.S. troops are deployed to Ukraine and told veterans there are better ways to help Ukraine than answering calls from Kyiv to fight there.

Drueke, who is due to turn 40 this month, was a former U.S. Army staff sergeant who served two tours in Iraq and who volunteered with the Ukrainian Army.

After coming back from Iraq he had struggled to find work or reintegrate into society after returning from war.

The platoon he was with came under heavy fire on June 9 and the group had to fall back.

Everyone was accounted for in the platoon the pair were fighting with except Dureke and Huynh. There appeared to be no sign of either following surveys conducted by drone.

Everyone was accounted for except Dureke and Huynh. There appeared to be no sign of either following surveys conducted by drone.

‘This could mean they are in hiding or it could mean they have been captured,’ Drueke’s mother, Bunny Drueke, said in a statement to Fox News. She said that she last spoke to her son on June 5 and had received a text message a few days later on June 9.

‘Going dark for almost all of tomorrow. Possibly the next day too,’ the message of his last text read.

Five days later, on June 13, she received a text from another member of her son’s platoon informing her of his disappearance.

‘When Russia invaded Ukraine, Alex immediately told me he wanted to go use his skills to train Ukrainians in how to operate American weaponry,’ Bunny said. ‘He isn’t married, he doesn’t have kids, and he has the training and the experience. He felt it was his duty to help defend democracy, wherever needed.

She said he was driven by the fear that Putin would not stop at Ukraine, and that he would try to invade the rest of Europe.

Drueke departed the U.S. in the middle of April and reached Ukraine via Poland.

Once there, he made contact with Ukrainian forces helping to train soldiers to operate drones along with other weaponry before he was assigned to a platoon.

Huynh, served in the Marines for four years, including on a base in Okinawa, Japan, for two years, but he had never been in active combat before.

He left his home state of Alabama to fight in Ukraine and has also not been heard from since June 8.

Before he flew to the region, he told a local media outlet in his hometown in Hartselle, Alabama: ‘I’ve made peace with the decision.

‘I know there’s a potential of me dying. ‘I’m willing to get my life or what I believe is right. For what I’ve been taught is right, through really my eyes, Marine Corps, through God, and really just what is right,’ he said.

He told his fiancee, Joy Black, that he would be unreachable for the next ‘few days.’

‘He was telling me for a few days that ‘I’m going to be busy soon,” his fiancee Joy Black told Fox. ‘He didn’t tell me what specifically because I don’t think he wanted to worry me.

‘We just really want him back. He’s got such a big heart,’ she told Good Morning America on Thursday.

‘He knew this wasn’t an easy thing but this was the right thing. Even though not great things have happened, I’m still really, really proud of him.’

One of the men’s comrades described losing sight of the pair in a battle last week as they defended Kharkiv.

The pair were part of a ten-man squad defending Kharkiv last week when they were ambushed by Russian soldiers, according to one of their comrades.

Drueke and Huynh disabled a Russian tank with a grenade but were lost in the fog of return fire. By the time it cleared, they had vanished.

‘We were out on a mission and the whole thing went absolutely crazy, with bad intel. We were told the town was clear when it turned out the Russians were already assaulting it.

‘They came down the road with two T72 tanks and multiple BMP3s (armored fighting vehicles) and about 100 infantry. The only thing that was there was our ten man squad,’ one of their comrades told The Daily Telegraph in an interview on Tuesday.

‘We suspect that they were knocked unconscious by either the anti-tank mine, or by the tank shooting at them, because later search missions found not sign of them, nothing.

‘Afterwards we sent drones up and had a Ukrainian search team on the ground but we found nothing: if they had been hit by the tank shell there would have been remains of their bodies or equipment at the scene,’ he said.

Russia invaded Ukraine on February 24, saying it was engaged in a ‘special military operation’ to disarm and ‘denazify’ its neighbor.

Ukraine and its allies say Moscow has launched an unprovoked war of aggression, killing thousands of civilians.

Reports that the two had been taken as prisoners of war by Russia are unconfirmed, the families and U.S. officials have said.

Earlier, the White House said it was ‘working very hard to learn more’ about the two.

‘There are reports of one additional American whose whereabouts are unknown… Our understanding was that this individual had traveled to Ukraine to take up arms,’ Price added, saying the third American was identified as missing in recent weeks.

The leaders of Romania, Italy, Germany and France joined Ukrainian President Volodymyr Zelensky in Kyiv on Thursday in a renewed show of support from Europe. Zelensky has repeatedly asked for weapons and money from foreign allies

The State Department, which urged Americans not to travel to Ukraine has confirmed that they are aware of the two missing citizens.

‘There are reports of one additional American whose whereabouts are unknown,’ but he could not ‘speak to the specifics of that case.’

‘We have not raised this yet with the Russian Federation. If we feel that such outreach through our embassy in Moscow or otherwise would be productive in terms of finding more information on the whereabouts of these individuals, we won’t hesitate to do that,’ spokesperson Ned Price said.

On Wednesday, Pentagon spokesman John Kirby said the administration would do ‘everything we can’ to bring them ‘safely home’ however he said their capture should serve as a reminder to Americans not to travel to the region.

‘If true, we will do everything we can to get them safely back home. But this is an important point in time to remind that we discourage Americans from going to Ukraine and fighting. It is a warzone. It is combat. If you feel passionate about supporting Ukraine there’s any number of other ways to do that that are safer.

‘Ukraine is not the place for Americans right now,’ Kirby said at a White House press briefing.

Rep. Terri Sewell, D-Alabama, and Sen. Richard Shelby, R-Alabama are also assisting the family with their communications with the State Department together with the U.S. Embassy of Ukraine and International Red Cross.