I Will Be The National Chairman That You Can Trust To Be Neutral, Unifier, Transparent, And Create Opportunity For All – Abankwa Yeboah | Politics 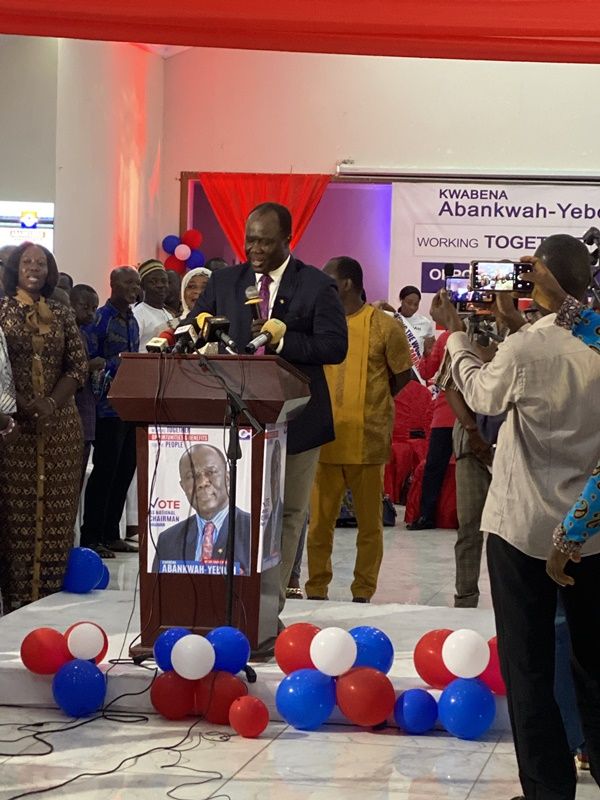 
The National Treasurer of the New Patriotic Party, Kwabena Abankwah-Yeboah, has officially declared his intention to contest the national chairmanship position of the Party.

He made the declaration Wednesday, May 10, 2022, in Koforidua in the Eastern Region.

The ceremony was attended by some Regional and constituency executives, delegates, and supporters of the party across the country.

Addressing the party faithful, Mr. Abankwah-Yeboah said he has risen through the ranks of the party as a founding member in 1992 through to polling station chairman, to the parliamentary aspirant, and served as National Treasurer for eight years hence competent to lead the party to win the 2024 elections.

He said the NPP has demonstrated to Ghanaians that it is the only party that implements pro-poor policy interventions that improve the lives of the people citing the National Health Insurance Scheme and the Free Senior High School policy.

He, however, said despite this hallmark of the NPP it will not be easy for the eight-year governance cycle to be broken for the NPP to retain power but he believes it is a possibility.

He said the party needs a leader who will bind the party together and mobilize resources for the base to be effective to win the 2024 Presidential election.

“My aim will be to bring everybody on board at all levels so that working together we bring opportunity for all us of for victory 2024. I will be the national Chairman that you can trust to be neutral, unifier, transparent, and create opportunity for all.”

Mr. Abankwa -Yeboah outlining his vision mentioned that he will institute an award scheme in the party to honor all hardworking party executives and members yearly.

He also said, when voted as National chairman, he will empower the grassroots with viable economic skills and initiatives, and create economic opportunities for the youth.

He also promised to create an effective and efficient welfare scheme to cater to members of the party in need.

Touching on internal disputes, Mr. Abankwah- Yeboah said he will adopt an alternate dispute resolution mechanism to swiftly resolve the internal issues of the party.

He added, “the problem of apathy will be dealt with through enhanced transparency trust, and respect for each other.”

He eulogized the current National Chairman Freddy Blay for his feat so far in the NPP.

The Eastern Regional Chairman of the NPP Kingston Okomeng kissi represented by the 1st Vice Chairman Alhaji Omar Bodinga declared support of the region to Mr. Abankwah on the basis of the fact that he has brought reforms to the party’s financial administration system and mobilization hence competent to be national chairman.

The constituency chairman in the Region similarly declared their support for him.

Mr.Abankwah -Yeboah hails from Kwahu Mpraeso in the Eastern Region of Ghana.

Mr. Abankwah-Yeboah is a founding member of the New Patriotic Party (NPP) who has risen through the ranks of the party from being a polling station chairman in 2006 to being a member of the Greater Accra Regional Finance Committee, the Greater Accra Regional Treasurer, and the Deputy Director of Campaign and Fundraising in 2016. He is currently the patron of Patriotic Volunteers and the Women’s Wing of the Asylum Down Electoral area and the National Treasurer of the party.