‘I feel honoured to be compared to Asamoah Gyan’- Boakye-Yiadom 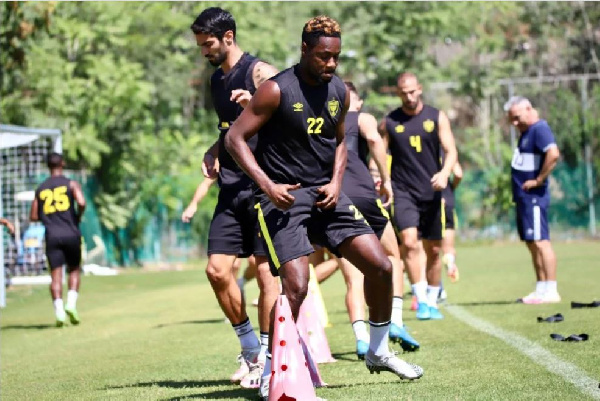 Richmond Boakye-Yiadom is a Ghanaian striker

Striker, Richmond Boakye-Yiadom, says he feels honoured to be compared to the former Black Stars Captain, Asamoah Gyan, adding that, with consistency in the national team, he can achieve half of Gyan’s feat for the country.

The Beitar Jerusalem forward said he sustained a couple of injuries while with Chinese club Górnik Zabrze which slowed his performance with the national team, however, with support and consistency in the Black Stars he would get to Gyan’s level.

Addressing the media on Thursday ahead of the crucial encounter against Gabon, the 28-year old called on Ghanaians to support the Black Stars to win the 2021 Africa Cup of Nations (AFCON) title.

Boakye-Yiadom has made 16 appearances for the senior national team and scored six since making his debut presence in 2012.

He said, “I’m very honoured to be compared to a player like Asamoah Gyan who has made an impact with the national team but I had a couple of injuries in China which slowed me down a bit. I’m still young and have more time and years and with support, we can achieve something for the national team.

“I believe to get to the level of Asamoah, one needs to be consistent in the national team as he had and it takes time to get to a certain level and improve. I may not get to his level but I can get to do half of what he did. I want Ghanaians to believe and support the national team so together we can achieve something for Ghana.”

Gyan has played in four Federation of International Football Association (FIFA) World Cups and is the highest scorer from Africa in the tournament’s history with six goals.

He has over 50 goals in just over 100 international appearances to his name and has proven to be a goal scorer at the highest levels.

Black Stars would take on the Panthers of Gabon on Friday, January 15 at the Stade Ahmadou Ahidjo, hoping for a win to revive their chances of sailing through the Group stage.