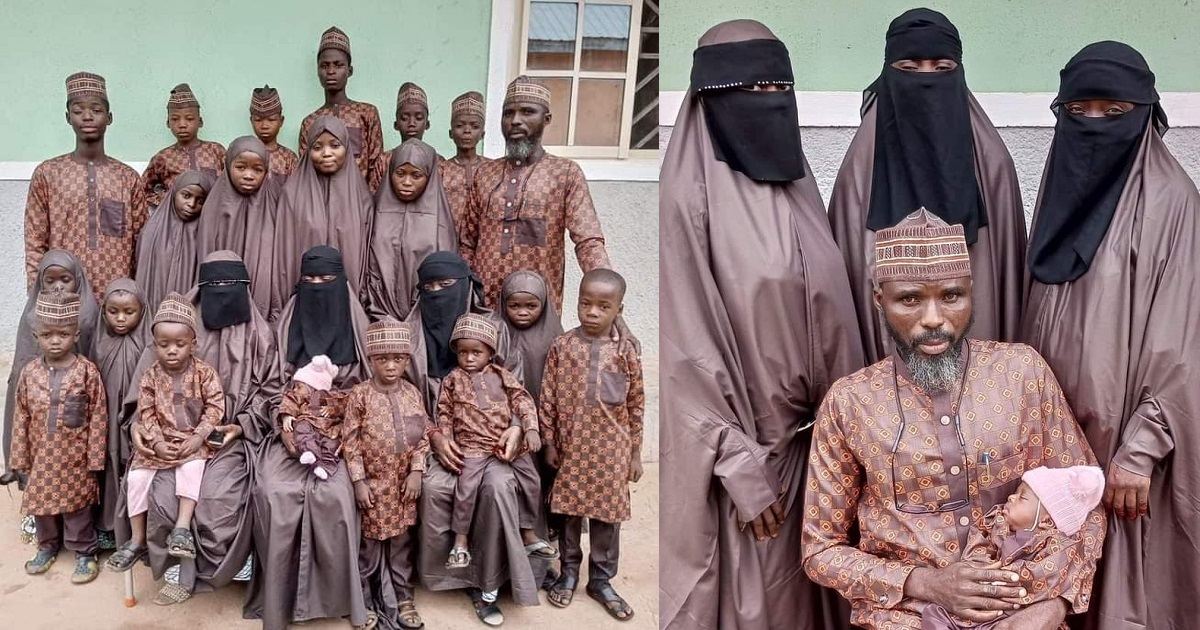 
The viral Nigerian man with three wives and 18 children has said he doesn’t mind having more children as long as he has a good job that earns him legitimate money.

Mohammed Suleiman became a viral sensation after he posted photos of his large family on Facebook during the Eid-el-Kabir celebration.

He granted an interview with Punch recently where he opened up about how he felt after his family photos went viral, his plans for more kids, and how he handles the financial obligations of having many kids.

“Actually, it is a tradition in my family for everyone to come together and take pictures, and I’ve been posting them on my page for years. If you follow my page, you’ll see them, but this year it became something else. I just discovered it is trending and has gone viral,” Sulaiman said.

He said he didn’t plan to marry multiple wives because he was scared of taking caring of many wife and kids, but here he is with three wives and 18 children with plans to take a new wife soon.

“Before I got married, if they had given me a wife, I would have said they should divide me into two. This is because the way we were brought up, we constantly heard about the difficulty of taking care of a wife and the children, so it made me feel like having half a wife, not a full wife. That was my mentality then, but as I grew and understood the philosophy of life, I realised that all I needed was to strive and work hard to cater to their needs, and I could see a lot of opportunities to do that without even working in a collar job. I also see it as a means to cater to women because there are many of them without a husband. I now have three wives, and I’m hoping to marry another one in two months’ time.”

He added that he has never had problems with providing and taking care of his large family because he works hard and plans for the future.

“To be sincere, maybe because I’m productive in terms of searching, working, and travelling. I can work anywhere. I remember that I once worked with a cargo company, moving from Saudi Arabia to Nigeria and other places. I have never found it difficult to feed my family or pay my children’s school fees,” he said.

“In short, I was awarded at my children’s school for being one of the parents that paid school fees promptly. My daughter is in university, my son is in a polytechnic, and I have at no time had any difficulty because I planned. I know after a school term, I will be paying for another term or semester, so somewhere along the line, I have it all planned out, and because I’m a Muslim, we were taught to plan things

“A pregnancy lasts for nine months; does it befit you as a man in the eighth month to start running helter-skelter for the delivery items? You have to plan ahead for the nine months, and as a Muslim, you plan ahead, so by the time it is the right time to produce all you need, Insha’Allah, you’ll have them already because you’re planning.”

Speaking on his plans to have more children considering the current state of the Nigerian economy, he said,

“Actually, so far, I haven’t considered the state of the economy. I’ve considered what I can do and how I can make money to satisfy my family. When the Kaduna State Governor increased the school fees in Kaduna universities, someone advised that I defer my daughter’s admission, but I refused because I was capable of working. Why am I working? Is it not to satisfy my family? When you hear people talk about the state of the economy, it is because they don’t want to work. I don’t mind, as long as I have a job that earns me legitimate money.”