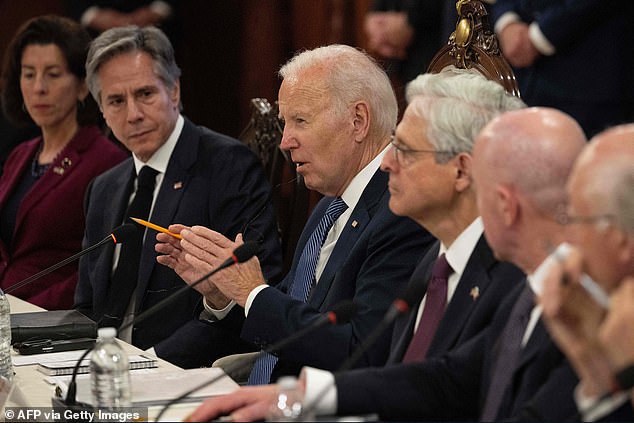 
Gaps in Joe Biden‘s story about his possession of classified documents contributed to Merrick Garland‘s decision to appoint a Special Counsel – a decision the attorney general made before he went to Mexico and sat beside the president during questioning on the matter.

Garland said he decided to appoint a Special Counsel on January 5th. Four days later he was in Mexico City, at Biden’s side as the president ignored questions shouted from journalists about the matter.

The attorney general kept his eyes down, fiddling with the microphone, pen and pad of paper on the table before him as White House staff ushered the shouting reporters from the room.

Next to him, Biden also focused on the binder before him. Garland wouldn’t announce his Special Counsel appointment until two days later in Washington D.C.

Attorney General Merrick Garland, seated by President Joe Biden’s side in Mexico on January 9th, had decided four days before hand to appoint a special counsel

The White House said they had no head’s up from the Justice Department on the announcement and Biden wasn’t warned what was coming.

‘We were not given a heads up and we learned from the press conference,’ press secretary Karine Jean-Pierre said at Thursday’s briefing.

And a Justice Department official told CNN that the White House’s public statements on the matter offered an incomplete narrative about the classified documents from Biden’s time as vice president, reinforced the need for a Special Counsel.

The misleading statements created the impression that Biden’s team had something to hide, the official said.

There was no further explanation of the discrepancy.

Robert K Hur, 50, served as the United States Attorney for the District of Maryland from 2018 to 2021 – he was appointed to that position by Donald Trump

Hur, a former senior Justice Department official in the Trump administration who served as U.S. attorney in Maryland, to serve as special counsel.

He joins Jack Smith, a former public corruption prosecutor who is investigating the documents found at Mar-a-Lago and efforts to undo the 2020 election, and John Durham, who secured one guilty plea and lost two criminal trials in three and a half years investigating the Trump-Russia probe.

The White House said they will cooperate with Kur and are ‘confident’ the investigation will show the files were ‘inadvertently misplaced.’

‘This appointment underscores for the public the department’s commitment to both independence and accountability in particularly sensitive matters, and to making decisions indisputably guided only by the facts and the law,’ Garland said.   The documents date back to Biden’s time as vice president in Barack Obama’s administration. There are 10 documents that involve the Ukraine, Iran and the United Kingdom.

There was also a memo from Biden to Obama, CNN reported, as well as two briefing memos preparing Biden for phone calls – one with the British prime minister; the other with Donald Tusk, the former prime minister of Poland who served as president of the European Council from 2014-2019.

Meanwhile, Jean-Pierre was forced to defend Biden against charges of hypocrisy on Thursday as she was grilled in her press briefing as to why the White House waited nearly a month to reveal there were additional classified documents in the president’s private possession.

The White House, reporters argued, had plenty of opportunities that included Sauber’s statement on Monday and when Biden addressed the issue on Tuesday in Mexico.

Jean-Pierre also said nothing about it in her Wednesday press briefing when she was specifically asked if there were additional classified documents in the president’s possession.

‘There was a process happening that was currently ongoing,’ she said.

‘This was the right thing to do,’ she noted.

She also argued the administration had been transparent because it disclosed the matter to the National Archives and the Justice Department immediately after the documents were discovered.

‘We have been transparent here. That is why the minute that his lawyers found those documents, they reported it. They reached out to the Archives and the Department of Justice, and they did that voluntarily, and they were not compelled to do it. They did it voluntarily,’ she emphasized.

In total, there have been three discoveries of classified materials: at the Penn-Biden Center, a think tank in Washington, D.C.; in Biden’s garage at his Wilmington, Del., home; and an additional discovery in his ‘personal library’ at Biden’s Wilmington home.

Garland said the National Archives informed the DoJ of the first discovery of documents on Nov. 4th and the FBI began an investigation five days later.

Nov. 3: The National Archives was notified of the discovery.

Nov. 4: The National Archives’ Office of Inspector General contacted a prosecutor at the Department of Justice and told them that classified material had been discovered at the Penn Biden Center. The documents were secured at an Archives facility.

Nov. 9: The FBI commenced an assessment to determine whether classified material had been mishandled.

Nov. 14: Attorney General Merrick Garland assigned the U.S. Attorney for the Northern District of Illinois, John Lausch, to determine if a Special Counsel was needed.

Dec. 20: The president’s personal attorney informed Lausch that additional documents with classification markings were found in Biden’s garage in Wilmington, Delaware. The FBI secured those documents.

Jan 5: Lausch advised Garland that a Special Counsel should be appointed.

On Nov. 14th, Garland assigned the U.S. Attorney for the Northern District of Illinois, John Lausch, to determine if a special counsel was needed.

On Jan. 9, the White House publicly announces classified documents from Biden’s time as vice president found at the office of his D.C. think tank – but made no mention of the documents found in the Wilmington garage.

Garland, at this point, had decided to appoint a special counsel. He was in Mexico City for the president’s summit with the leaders of Mexico and Canada.

On Thursday, Jan. 12, the president’s personal attorney informed Lausch that an additional document was discovered at Biden’s Wilmington home.

Jean-Pierre was asked over and over again on Thursday, by at least nine different reporters, why the December 20th discovery wasn’t disclosed immediately or at least with the other disclosure.

She had been asked the previous day – 24 hours before the announcement that more classified material discovered – if there were any classified documents in Biden’s Wilmington home. She responded: ‘I’m just not going to speak to this. I’m going to let the process continue. It’s an ongoing process.’

The White House was already under fire for waiting almost two months to disclose that classified documents were found on Nov. 2nd at Biden’s think tank office as his lawyers packed it up in preparation for it to be closed.

Jean-Pierre also was asked why the White House argued it was being transparent because it informed a federal agency but did not disclose the matter publicly to the American people.

The White House was forced to admit on Monday – in the wake of a report from CBS News – that there were classified documents found at the D.C. office housing the think tank Biden founded after leaving the vice presidency.

‘Look, we’re trying to do this by the book.,’ Jean-Pierre responded. ‘And I said yesterday, this was under review by the Department of Justice.’

CBS Ed O’Keefe grilled her repeatedly on the transparency issue. On Biden’s first day in the White House, his then-press secretary Jen Psaki promised that the president plans to ‘bring transparency and truth back to the government to share the truth, even when it’s hard to hear.’

O’Keefe asked about that vow.

She also noted that Richard Sauber, the White House special counsel, has made statements on the matter.

‘They haven’t laid out everything Karine, and you know it,’ O’Keefe responded.

She responded that she couldn’t speak in more detail because of the Justice Department investigation, nor would she commit to bringing White House Counsel Richard Sauber come to the press room to answer questions about the situation.

‘You need to acknowledge then there’s going to be a limit and transparency, public non legal transparency, and what can be shared and set by this way,’ O’Keefe said.

‘I disagree. There has not been a limit of transparency,’ Jean-Pierre responded. ‘I disagree with you on that.

The White House press secretary also noted any further disclosures would come from the Justice Department.

Democrats faced a flood of criticism from Republicans, who had demanded a Special Counsel. Garland’s announcement came as pressure is building on the White House to explain how the documents were in Biden’s possession, why their existence wasn’t announced until after the midterm election and what was being done about it.

‘We are confident that a thorough review will show that these documents were inadvertently misplaced, and the President and his lawyers acted promptly upon discovery of this mistake,’ Sauber, the White House special counsel, said in a statement about Hur’s appointment.

Garland said on Thursday that Hur is authorized ‘to investigate whether any person or entity violated the law in connection’ with the classified documents.

‘I will conduct the assigned investigation with fair, impartial, and dispassionate judgment. I intend to follow the facts swiftly and thoroughly, without fear or favor, and will honor the trust placed in me to perform this service,’ Hur said in a statement released after his appointment was announced.

‘A special counsel will not be subjected to the day-to-day supervision of any official of the department. But he must comply with the regulations, procedures, and policies of the department,’ he said during the five-minute announcement at the Justice Department.

Former President Donald Trump is facing a special counsel of his own and is under federal criminal investigation for his handling of classified documents and other potential transgressions.

The twice-impeached president who announced his third bid for the White House in 2024 in November was all but giddy upon hearing that Gartland appointed Special Counsel to review Biden’s document drama.

‘It’s over,’ Trump said in an interview with conservative talk radio host Mark Levin on Thursday evening. ‘When all of these documents started coming out and Biden had them, it really changed the complexion and the intensity that they were showing to me because, you know, what they did is – I don’t say far worse, I did nothing wrong — what they did is not good. What they did is bad.’