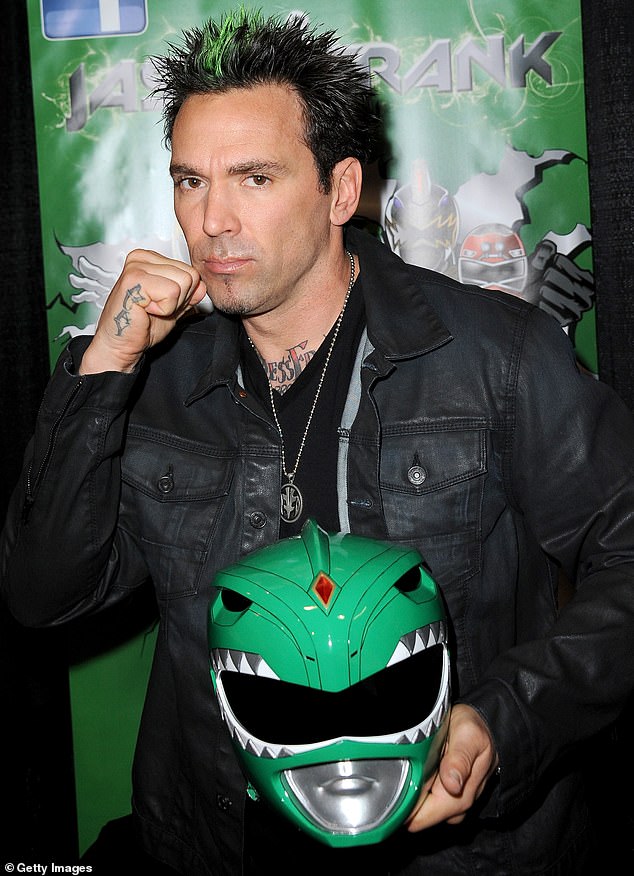 By Sophie Mann For Dailymail.Com

The actor who played the Green Power Ranger is believed to have committed suicide.

According to his representative, Justine Hunt, Frank died in Texas.

‘Please respect the privacy of his family and friends during this horrible time as we come to terms with the loss of such a wonderful human being,’ she told TMZ. ‘He loved his family, friends and fans very much. He will truly be missed.’

The actor’s family has yet to make a statement.

He is survived by his four children – Hunter, Jacob, Skye and Jenna.

Jason David Frank, who played the Green, and later White, Power Ranger, was 49 at the time of his passing

Frank portrayed many different color Rangers over the years, including Green, White and Red, as he returned to the franchise for a handful of movies

Jason David Frank (second to left) is pictured in a shot from Turbo: A Power Rangers Movie

Frank was best known for playing Tommy Oliver on the original run of the ‘Mighty Morphin Power Rangers’ show, which debuted in 1993.

He was first introduced as the Green Ranger in Season 1, in which he was positioned as an enemy of the Rangers before harnessing his powers for good.

When his powers as Green Ranger began to deteriorate, he was turned into White Ranger and went on to become the new leader of the crime and monster-fighting group.

He starred on the children’s show for three seasons, totaling 123 episodes.

He also reprised his role in several Power Rangers movies, in which he portrayed Red Ranger, Black Ranger and Green Ranger again.

Frank was trained in MMA fighting, Brazilian Jiu-Jitsu, Taekwondo and a handful of other martial arts. He fought professionally from 2008-2010.

If you or someone you know is considering suicide, help is available by dialing 988, texting ‘STRENGTH’ to the Crisis Text Line at 741741 or going to 988lifeline.org to be connected to a certified crisis counselor