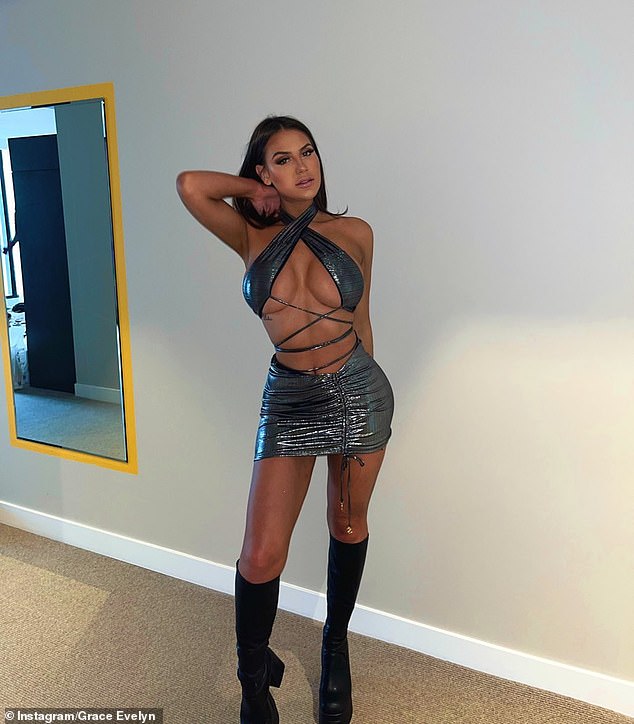 
A model who ‘internally’ smuggled cocaine into a music festival insists she is a ‘nice girl’ as she breaks her silence about the humiliating moment she was caught and strip searched.

Grace Evelyn, a 24-year-old business student, was waiting outside the exhibition hall for a DJ MaRLo concert at Sydney Olympic Park at about 9pm on May 14 when sniffer dogs began to bark around her.

When cops asked to search Ms Evelyn outside, she began to cry.

Instead of joining nearby revellers and dancing for the next three hours, she was left explaining to the police they wouldn’t find her prohibited stash with a pat down.

The 24-year-old said she just ‘wanted to have a little fun’ not have a near career-ending ordeal interstate. There is no suggestion of wrongdoing by the two men with her in the photo above

Ms Evelyn confessed to police she had a condom, tied off and containing a small amount of cocaine, stashed in her private parts, court documents said.

She told police the illicit substance was for sharing between her and her girlfriends and that she herself had so far only taken a single ‘bump’ of cocaine.

In a private room strip search, Ms Evelyn showed police the substance, telling them she had paid $300 for it – the typical street value of 0.7 to one gram of cocaine.

Records stated she had 5.6 grams of cocaine, though it’s unclear how much of the condom’s weight was counted in official recordings.

Her original charge was supplying drugs – less than a commercial quantity.

Ms Evelyn – who copped a fine, escaped a conviction and was handed a 12-month conditional behaviour bond by a magistrate – told Daily Mail Australia the search was a horrible experience.

‘I have never been in trouble before, I was very scared so I said the wrong things,’ she said.

‘I am a nice girl, I never intended to supply. It was really scary!

‘I was so shaken up and I just wanted to do the right thing and be nice.

‘Obviously I wanted to have a little fun, I had a small amount and yes I tried to hide it – like everyone else – but I was caught.

‘It was totally blown up and they tried to really f*** me up for it.

‘Their case was weak and the judge was so, so understanding and literally saw right through it.

‘I have fun, but I am finishing my degree and want to do well.’

The model thanked her criminal lawyer and clean-record boxer Ahmed Dib in the wake of the case.

The outcome comes as sniffer dog accompanied police came under fire for their heavy presence in Gold Coast airport ahead of recent festival Splendour in the Grass.

In 2019, Grace Poo was put behind bars for trying to smuggle a much larger quantity of drugs into a music festival at Olympic Park in 2018 by similar means.

Sydney’s love affair with cocaine exploded in the last 20 years, with the appetite for the drug across the city becoming increasingly ‘insatiable’.

TV actors, models and wannabe gangsters who pose on Instagram in bikinis or with luxury cars displaying their tattoos and gangster bling have been arrested, convicted and sent off to jail.

NSW Bureau of Crime Statistics figures released this year showed a 12.5 per cent increase of cocaine use and possession arrests over the five years until 2020, whereas drugs like ecstasy had declined in popularity.

Australian Criminal Intelligence Commission suggests the nation’s base of cocaine users is ‘broadening’, with a growing social acceptability of the drug.

Drug manufacturers of cocaine in South America see Australia as a lucrative market for large exports due to its high price – about $300 a gram – on Sydney streets.