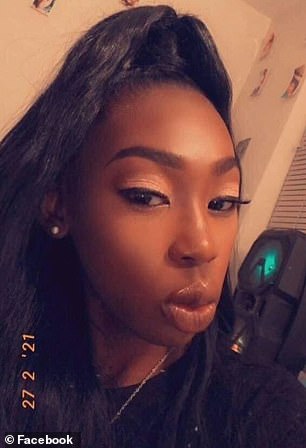 D’Asia Johnson, 22, was found dead on September 21. She was found chopped up in two suitcases in her Brooklyn apartment

The new girlfriend of a suspected killer who was accused of hacking his former lover to death and storing her dismembered limbs in suitcases used her benefits card, it has been claimed.

D’Asia Johnson, 22, was found dead on September 21 at her Brooklyn apartment – but now it’s been alleged her Electronic Benefits Transfer card was being used by her estranged boyfriend’s new partner.

Her dismembered body was found inside blood-stained Apartment 6F at Linwood Park Apartments, an affordable housing building in East New York, Brooklyn. A meat cleaver was also found near her body.

Williams, who lives in Harlem, was announced by Nassau County Assistant District Attorney Brittany Gurrieri as a person of interest in the gruesome crime.

His other unnamed girlfriend – who is also the mother of his children – had been using Johnson’s benefits card since she had died, according to the NY Daily News.

It’s not clear what the woman purchased while using the card.

D’Asia’s Electronic Benefits Transfer card was used by Williams’ other girlfriend after her death, it’s been claimed

The body was found inside Apartment 6F at Linwood Park Apartments, an affordable housing building in East New York, Brooklyn

The building has 100 apartments, most of which are affordable units. Others are for recently incarcerated Rikers inmates

On Sunday, NYPD also released the images of five men and one woman who they were looking to question in relation to Johnson’s death.

The 22-year-old had not been seen for several weeks before neighbors noticed a foul smell coming from inside the home last month.

One called the building’s super to request a welfare check which prompted the grim discovery.

According to sources, the super arrived at the apartment and was met by the victim’s boyfriend, who refused to let him in.

He then called the police – at which point the boyfriend and another man were seen fleeing the building carrying a duffle bag, NY Daily News reported.

The super then returned to the empty apartment to find the suitcases stuffed with the victim’s body parts, as well as the meat cleaver in the bathroom.

Johnson allegedly had an order of protection filed against her estranged boyfriend before she was found dead. Part of the order meant he was barred from being at her apartment.

Of the charges Williams was in court for today, he pleaded not guilty and bail was set at $125,000 for the assault at the laundromat, as well as $25,000 for the Walgreens grand larceny.