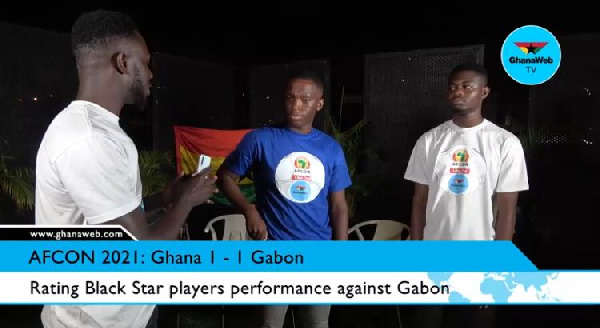 Ghana shared the spoils with Gabon in their first-ever encounter at the 2021 African Cup of Nations in a disappointing fashion on Friday, January 14, 2021.

The Black Stars after taking the lead through Dede Ayew’s sumptuous strike in the first half conceded a 90th minutes goal to end the game in a one-all stalemate.

The draw means Ghana are third in Group C with a point from two games, sitting behind Gabon and Morocco, who have already qualified.

In the game where Ghana led for the majority part, Andre Ayew was named CAF’s man-of-match a after good show which was capped by a goal.

Meanwhile, Kamaldeen Sulemana and Thomas Partey were the worse performers as Alexander Djiku stood out in Ghana’s backline. Iddrisu Baba who was at the base made sure Ghana had some control until he was subbed off due to injury.

Joseph Paintsil who came from the bench was arguably Ghana’s brightest spot in attack and could have doubled the lead for Ghana through a counter-attack but the move got delayed by Dede, which allowed Gabon to cover.

GhanaWeb’s sports team looked into the individual performance of the Black Stars players in last night’s game against Gabon.