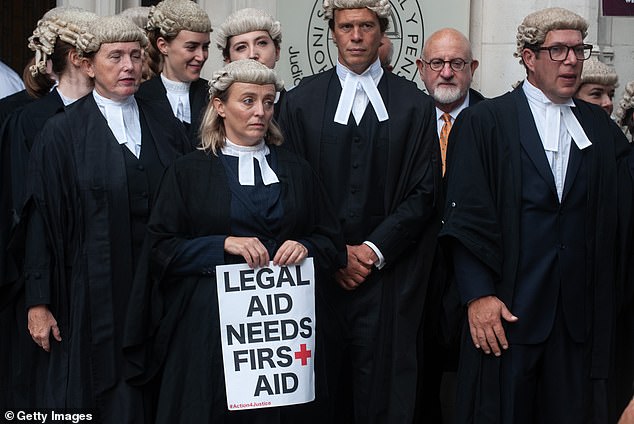 
Four murder suspects have been released from prison after their custody time limit elapsed due to court delays exacerbated by the ongoing barristers’ strikes.

On Wednesday, Oxford’s most senior circuit judge Justice Ian Pringle, refused to extend the six-month remand period for the four defendants, who are accused of fatally stabbing a 40-year-old man outside his home in Banbury on February 13.

The trial was due to start on September 12, however indefinite strike action by members of the Criminal Bar Association (CBA) over Legal Aid rates has delayed proceedings, the Oxford Mail reported.

As a result, prosecutors applied for their custody time limits to be extended, arguing that the exceptional delay caused by the strike action amounted to sufficient reason to keep the four behind bars.

However, the application was denied by Judge Pringle, who during the ruling acknowledged that the Crown Prosecution Service had acted with ‘all due diligence and expedition’ in making its application to extend the custody time limits.

Judge Pringle said: ‘This case turned purely on ‘good and sufficient cause’.’

Previously, Judge Pringle has said in other cases that delays caused by the barristers’ strike have not amounted to ‘good and sufficient cause’.

A written ruling explaining his full reasons for refusing the application is due to be published later today.

The law states that a judge may extend the statuary custody time limit only if they are satisfied there are ‘good and sufficient’ reasons to do so.

Individuals can be held in prison as they await trial for up to 182 days (just under six months), however judges have the power to extend the time period for which someone can be held behind bars.

There are mounting fears that the indefinite strike action launched by CBA members will result in more suspects being released after the six-month custody time limit elapses.

On Wednesday, the Ministry of Justice started talks with the CBA in a bid to resolve the strike action, which centres on a row over the Government’s 15 per cent legal fee rise.

New Justice Secretary Brandon Lewis urged striking barristers to return to work as they met with ministers for the first time since the start of their industrial action.

In a brief statement following his talks, Mr Lewis said the discussions had been ‘constructive’ and would continue.

The indefinite strike action centres over a row over pay and conditions, and this week talks were held with the Justice Secretary in a bid to resolve the dispute

His predecessor Dominic Raab previously refused to meet with the CBA during their action over pay.

The meeting was initially meant to take place last week but was delayed after the Queen’s death.

While all planned demonstrations were also postponed, the all-out strike has continued during the national mourning period.

Criminal barristers are due to receive the rise from the end of September, meaning they will earn £7,000 more per year.

However, CBA members are calling for an immediate 25 per cent rise in legal aid fees, in which they represent defendants who are unable to afford legal representation and access to the court system.

It comes at a time when living costs have soared and thousands of workers across an array of industries including transport, telecoms, and the postal sector, have staged walkouts over anger that their salaries do not match rising inflation.

‘We have proposed a 15 per cent increase to criminal barristers’ fees due to come into force next week and are spending almost half a billion pounds to speed up justice as we recover from the pandemic.’

‘Due to the expiry of the custody time limit, the defendants have been released from custody and will now be subject to bail conditions.

‘The judgment is a matter for the court and relates to the ongoing barrister industrial action. Therefore, we cannot say much more other than to confirm that the court raised no issues in relation to the investigation or prosecution case at the point their decision was made.

‘We will now work with partners and other relevant parties to manage the consequences arising from the judgment of the court.’