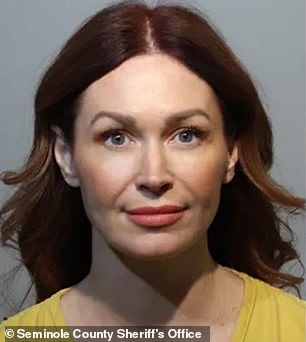 
A 76-year-old woman is suing a catering company for $30,000 after she ate a lasagna spiked with cannabis at a wedding in February, leaving her with ‘severe, permanent injuries’.

Virginia Taylor-Svoboda attended the wedding of a relative before which the bride, Danya Svoboda, 42, allegedly schemed with Joycelyn Bryant, 31, of Joycelyn’s Southern Kitchen, to serve bread, pasta and desserts laced with marijuana to nearly 70 unknowing guests.

They started feeling sick soon after eating the variety of foods prepared by Bryant and at least eight people were taken to the hospital, according to the Seminole County Sheriff’s Office. Some were even taken out by paramedics on stretchers.

On top of the new civil charges accusing Bryant of negligence, the bride and caterer were criminally charged in April with delivering marijuana, tampering with guests’ food and misdemeanor culpable negligence after the dinner.

Taylor-Svoboda’s lawsuit, filed on Monday, states that Bryant ‘knew, or should have known, that allowing the food served [by Joycelyn’s Southern Kitchen] to be laced with marijuana was reasonably likely to cause injuries and damages to wedding guests.’

Bride Danya Svoboda, 42, (left) collaborated with caterer Joycelyn Bryant, 31, (right) to drug her wedding guests with cannabis. A relative of Svoboda is now suing Bryant’s catering company for $30,000 in damages

By the time police arrived, employees of Bryant’s catering service, ‘Joycelyn’s Southern Kitchen,’ were fleeing into their vehicles and away from the venue. Bryant is pictured here in a promotional photo

Svoboda cried at the altar and guests cheered after she and her partner Andrew were officially pronounced husband and wife. He would later be too stoned to answer officers’ questions

A woman identified as Melissa Stout said she attended the wedding from Michigan. After feeling buzzed from a couple of drinks, she ate some food to stop herself from becoming too intoxicated.

She had a Caesar salad, a pasta with white sauce and bread with herb dip, according to an arrest warrant obtained by Law and Crime.

‘After eating the food, she felt much worse,’ deputies say. She ‘didn’t notice anyone else getting sick as she was on her hands and knees throwing up.’

Every guest tested for cannabis showed positive results, according to the warrant, and none who were interviewed by police said they knew their food had been laced with marijuana.

Guests interviewed by police said they would prosecute whoever contaminated the food. By the time police arrived, employees of Bryant’s catering service, ‘Joycelyn’s Southern Kitchen,’ were fleeing into their vehicles and away from the venue.

They also said the bride nodded and ‘acted as if she’d given them a gift’ when they asked her if there were drugs in the food.

One woman told police that she saw Bryant, pictured, removing a ‘green substance’ from a punch bowl, placing it into ramekins and mixing it with olive oil

The joy gave way to confusion, terror and stupor after the nearly 70 guests – including elderly couples on medication – were served bread, pasta and desserts laced with marijuana. Miranda’s place-setting is seen here

Another guest, Miranda Cady, 38, attended the wedding on February 19 as a guest of bride Danya, who was marrying Andrew Svoboda.

The outdoor ceremony took place in a gated community in Longwood, a suburb of Orlando.

Videos obtained by DailyMail.com showed Danya crying at the altar and guests cheering with glee after she and her partner were officially pronounced husband and wife.

‘It all hit everyone pretty instantaneously,’ Cady told DailyMail.com. ‘We were all fine and then we were all not.’

Speaking to WFTV, she added, ‘I actually text myself, at one time, a message just in case I didn’t make it through the night.’

A scared guest asked best man Matthew Svodoba what was going on. But Matthew, who works for the Department of Justice, appeared ‘incoherent and could not answer a question,’ according the arrest warrant.

The bride has ‘a great energy and vivacious personality,’ Cady said. ‘It was pretty traumatic – emotionally traumatic. I’m the type of person to walk into a room and everyone’s my friend.

‘To be violated this way from someone you like and trust is really hurtful. I didn’t have an option or say. Even if people avoided things like the olive oil, it was still in the bread, in the pasta.’

In the video, Danya barely manages to suppress a smile as she stares at the officer, blinking but saying nothing.

Meanwhile her new husband tried to suggest to police that that guests may have brought their own edible cannabis products to the wedding.

Lab-grown microalgae could be the food of the future

An old tweet of 30-year-old Botswana woman, Lesedi Molapisi, who is facing the death penalty…

Lab-grown microalgae could be the food of the future