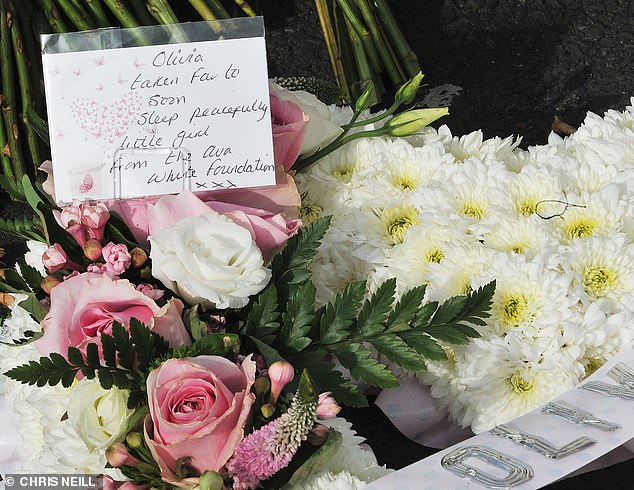 
The family of Ava White have laid a wreath outside the home of nine-year-old Olivia Pratt-Korbel and paid tribute to the little girl who they say was ‘taken far too soon’.

Olivia was shot in the chest after a balaclava-clad gunman chased his intended target into the innocent girl’s home in the Dovecot area of Liverpool last Monday evening.

The youngster’s death has sparked an outpouring of grief and shock among the Merseyside community, with many laying wreaths and leaving cards near Olivia’s family home in Knotty Ash, Liverpool.

Among those to pay tribute to Olivia was the family of 12-year-old murdered schoolgirl Ava White, who was fatally stabbed by a teenage boy in Liverpool city centre last November following a row over a Snapchat video.

Ava’s family have laid a heart-shaped wreath, covered with flowers and decorated ornately with white ribbon and a butterfly and accompanied with a heartfelt message.

‘Taken far too soon’: A message from the Ava White Foundation was left near Olivia Pratt Korbel’s home in Dovecot, Liverpool, to pay tribute to the nine-year-old

Ava White, 12, was fatally stabbed during a Christmas lights switch-on in Liverpool last November. A teenage boy was found guilty of her murder

The youngster’s tragic death happened less than year after Ava White was fatally stabbed, with a 15-year-old boy who cannot be named for legal reasons jailed for her murder last month following a two-week trial at Liverpool Crown Court.

A 36-year-old man from Huyton and a 33-year-old from Dovecot were arrested on suspicion of murder and two counts of attempted murder in relation to Olivia’s death last week and have been released on bail.

Yesterday, an inquest into Olivia’s death heard that a police officer ‘scooped and ran’ with the little girl in his arm’s in a desperate bid to save her life.

At Olivia’s inquest, which was opened and adjourned on Tuesday, Andre Rebello, the senior coroner for Liverpool, said: ‘At approximately 10.15pm she was brought into the main entrance in the arms of a police officer.

‘The officer had covered the wound to her chest with his hand and she was noted to have a weak heart which had stopped prior to her arrival in hospital.’

Flowers have been left near Olivia’s family home in Knotty Ash, Liverpool. The Merseyside community has been rocked by the death of the little girl, which marked the third gun-related crime in the city in less than a month

The coroner told the hearing he had also dealt with the death 15 years ago of 11-year-old Rhys Jones after he was shot in Croxteth, Liverpool.

He added: ‘It is quite shocking that society has not changed for the better.

‘It is shocking that a nine-year-old little girl, with a full life in front of her, is shot anywhere, but to be shot in her own home, in the safety of her home, is heinous and unforgiving.

‘There must be people in Liverpool, or elsewhere by now, who know precisely by what means Olivia died and who was responsible for her death.

‘Olivia’s death will not just affect her immediate family and friends but also school communities, church communities, not just in the Knotty Ash and Dovecot areas of Liverpool but the whole city, Merseyside, and I know right across this country people are shocked by Olivia’s death.

‘I understand Merseyside Police would be very grateful for anyone with any information who could bring some knowledge to the circumstances in which Olivia came by her death, no matter how insignificant that information may be.’

Last night, a vigil for gun victims including Olivia, Sam Rimmer and Ashley Dale was held in a Tesco car park.

Old Swan Churches Together, a collection of churches from the area and beyond, joined together to host the vigil which saw groups gather to light candles to remember Olivia, Ashley and Sam who were all killed last week.

During the vigil, Fr Peter F Smyth, Vicar of Holy Spirit Vicarage in Dovecot, spoke of how their community was ‘devastated’ by the tragic death of Olivia and highlighted the similarities between her murder and the killing of Rhys Jones in 2007.

Fr Smyth said: ‘This has got to end, this city of ours has experienced evil before, the evil that took the life of little Jamie Bulger or indeed the evil who took the life of Rhys Jones exactly 15 years to the day, to the evening before the life of Olivia was taken last week.

‘Sadly we will probably see evil again but as a Scouser, I know that this city has a heart which beats with love and beats with compassion.

‘The community that I live in is decimated and devastated by the death of Olivia. That [the death of Rhys Jones] should have been a watershed, in fact at the time it was heralded as a watershed. Things had to change.

Later today prayer service and silent vigil will be held at St Margaret Mary’s Church in memory of Olivia.

Police in Liverpool have announced they made more than 30 arrests in 24 hours as part of a crackdown on organised crime in the wake of the violence.

In one traffic stop, a man was seen being led away from a BMW in handcuffs and put into a police car after he was stopped less than 100 yards from Kingsheath Avenue, where Olivia was shot.

The action was part of Operation Miller, the force’s effort to tackle organised crime in the area.

Detective Chief Superintendent Mark Kameen said: ‘The communities of Dovecot, Old Swan and Dingle are still reeling from the murders that have taken place in the areas they call home and we owe it to them to stop those involved in serious organised crime, which can result in innocent members of our communities being seriously injured or killed.’

He pledged to leave ‘no stone unturned’ in the hunt for the killers, with help from other police forces across the country.

‘The murder of Olivia in her own home, the place where she should have been safest, has crossed all boundaries and detectives and uniformed officers are working round the clock to find the person or persons responsible,’ he added.

Monday’s action takes the total number of arrests to 202 and warrants to 69 during the operation.

Officers have also been deployed on major routes in and out of the city targeting people involved in organised crime.