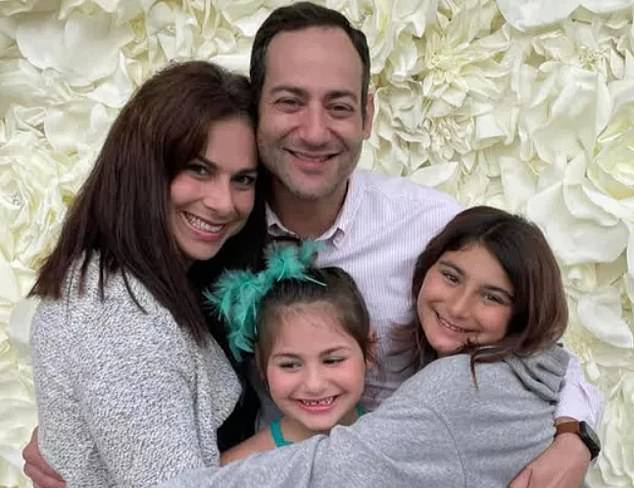 
A senior policy advisor working in ex-New York Governor Andrew Cuomo’s office was hit and killed by a car after he was forced out of a Lyft in the middle of a busy highway.

Sid Wolf, 43, was killed in the early hours of Sunday morning after he and a group of five friends got into a dispute with their rideshare driver in Dewey Beach, Delaware.

An oncoming Toyota Corolla swerved to avoid the Lyft, and hit the father-of-two who had gotten out of the car and was standing in the road. His five friends were uninjured.

The driver of the Corolla stayed on the scene, but the Lyft driver, believed to be driving a white Honda Pilot SUV, fled the scene.

On Tuesday night, Cuomo said in a tweet that he was ‘shocked and saddened by the news.’

‘Sid was a phenomenal public servant who worked relentlessly for the betterment of all New Yorkers,’ he said.

‘My heart goes out to Lindsey and his two young daughters.’

Sid Wolf, 43, was killed in the early hours of Sunday morning after he and a group of five friends got into the ride-share and got into a dispute with the driver in Dewey Beach, Delaware

On Tuesday night, Cuomo said in a tweet that he was ‘shocked and saddened by the news’. ‘Sid was a phenomenal public servant who worked relentlessly for the betterment of all New Yorkers,’ he said

Wolf worked for the Cuomo administration from 2019 to 2021 as a senior policy advisor.

He also recently worked as the re-election campaign manager for Montgomery County Councilmember Sidney Katz, who had spoken to him on the Friday night before he died.

He said: ‘I did speak to his wife…and I mean, it’s just heartbreaking. There’s no other way to say it. It’s just absolutely heartbreaking.’

The Lyft driver had picked up Wolf and his five friends in Dewey Beach and was meant to be taking them to their destination Bethany Beach.

The crash happened south of Anchor Way on Coastal Highway (Route 1) at about 1.44am, police said.

Wolf died at the scene, they confirmed.

In a statement, Lyft said it was ‘heartbroken by the incident.’

A spokesperson said: ‘Our hearts are with Mr Wolf’s loved ones during this incredibly difficult time and we’ve reached out to the ride requester to offer our support.

‘We have permanently removed the driver from the Lyft community and are in contact with law enforcement to assist in their investigation.’

It’s unclear whether police have tracked the driver down.

A GoFundMe page has been set up by the family’s neighbors following Wolf’s tragic death – as it paid tribute to the man who ‘always had a smile on his face.’

The fatal crash happened south of Anchor Way on Coastal Highway (Route 1) at about 1.44am, police said

It read: ‘Sid always had a smile on his face and was a great husband, father, friend, and neighbor to so many of us. We hope to raise enough funds so that Lindsey does not have to worry about household expenses right now.

‘The family wants to extend their heartfelt gratitude for the tremendous outpouring of support from their friends and loved ones during this time.’

The 43-year-old lived in Gaithersburg, Maryland, with his wife and two young daughters. He was also a coach for a local youth hockey team.

Writing on social media, Wolf’s sister Brooke Freed said she is ‘lost’ without her brother, who was a ‘source of comfort and wisdom.’

She wrote: ‘My brother was someone I always looked up to. The guy would walk into a room and instantly became everyone’s favorite person. It used to drive me crazy and then I realized … I want to be just like that. I have soooo many thoughts and feelings going through my mind. I can’t believe I’m writing this.

‘I can’t believe this has happened. Please keep my family in your thoughts and prayers. I lost not just my brother but a role model and a friend and a source of comfort and wisdom. I can’t even get all of my thoughts out… I have so much to say. I love you Sid. This should never have happened and a part of me is missing and I will forever miss you.’

Another obit for the policy advisor read: ‘Sid was a people magnet. He was the first to welcome you with a hug; his life force was unmistakable and irresistible. He effortlessly collected friends and treasured family above all.

‘He leaves a big hole for his many loving aunts, uncles, nieces, nephews, and cousins, and all who were lucky enough to know him.’