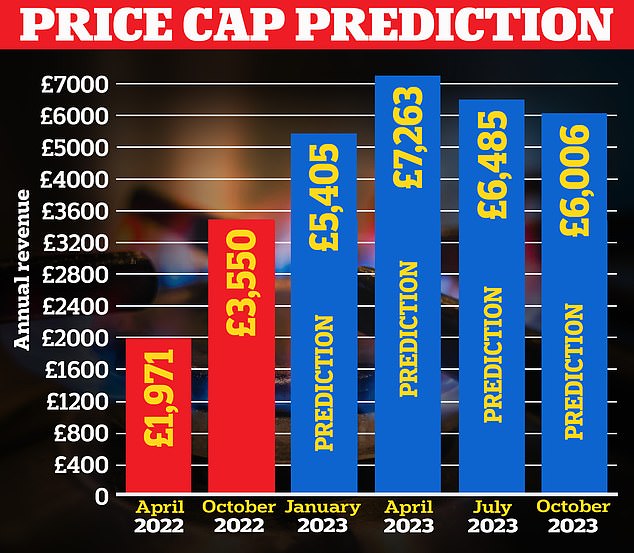 Energy companies are set to make £170 billion extra in profits as Brits struggle to pay bills and are hit with 22 per cent inflation.

Goldman Sachs said inflation will double as the price cap on energy bills continue to rise, pushed up by soaring gas prices.

The astonishing sums will be delivered by officials to the next Prime Minister on September 6, putting pressure on them to impose another windfall tax to ease the energy crisis this winter.

A tax at the current windfall rate of 25 per cent would bring in billions of pounds for the Treasury to help give assistance to households through the cost of living crisis.

However, likely winner of the Conservative leadership contest Liz Truss has said repeatedly she is against new taxes and instead wants to cut tax in an effort to create economic growth.

Graphs show how energy bills could reach a stunning £7,263 by next year

UK gas prices are soaring after Russia began throttling off supplies to Europe, causing a global shortage as EU leaders scramble for supplies

EU prices are at near-record levels amid fears Russia could soon turn off the gas tap completely, with leaders already discussing energy rationing

Ofgem announced this week the energy price cap would rise to £3,549 for average UK households, making bills unaffordable for people across the country.

US investment bank Goldman Sachs has predicted the price cap could rise by yet another 80 per cent by next year.

A windfall tax imposed in May is predicted by the Treasury to generate £5 billion in its first year.

Legislation passed in July allows the tax to run until 2025 – it allows companies to lower the impact of the tax if they invest in oil and gas production that could increase the supply of energy.

The government has so far rejected imposing the windfall tax on electricity producers because rising gas prices have pushed up the price the producers can charge.

Some electricity producers have seen an increase in profits even when they have supplied less energy.

The leaked figures show 40 per cent of the £170 billion extra profits are made by energy producers.

The Treasury said it did not recognise the figures, and pointed to the money that would be raised by May’s windfall tax.