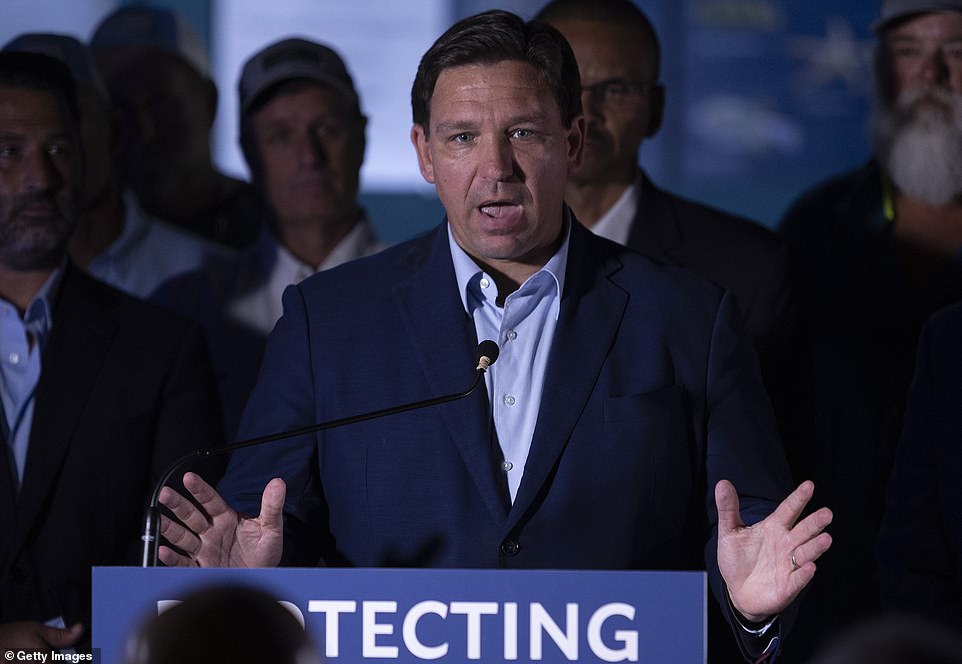 The Republican warned ‘we have child protective statutes on the books’ and ‘laws against child endangerment’ as he condemned footage of youngsters dancing with acts at a gay bar in Texas last weekend.

He said there appeared to be a ‘concerted effort to be exposing kids more and more to things that are not age appropriate’ and blasted the clip that showed a child in front of a sign that read ‘it’s not gonna lick itself’.

His comments follow others slamming a viral video of children at a ‘drag your kids to Pride’ event at Mr. Misster gay nightclub in Dallas.

The elementary-aged youngsters were recorded dancing with drag queens wearing skimpy thongs as well as handing over cash to them during the performance.

Speaking at a news conference in Fort Myers Beach Wednesday, Ron DeSantis revealed that he has asked his state to deploy its child protective services to look into the recent phenomenon of parents taking their children to drag shows, after video of kids attending a performance at a Dallas gay surfaced online over the weekend

The Florida governor’s comments were prompted by now viral clips that showed elementary school-aged children dancing alongside men dressed in drag at the Mr. Misster gay club Saturday, beneath a neon sign reading ‘It’s not gonna lick itself’

‘We have child protective statutes on the books,’ DeSantis, 43, told onlookers during a conference in Fort Myers Beach Wednesday, in which he addressed public outcry over the footage. ‘We have laws against child endangerment.’

Visibly troubled, the politician went on: ‘It used to be kids would be off-limits – used to be everybody agreed with that.’

‘Now it just seems like there’s a concerted effort to be exposing kids more and more to things that are not age appropriate.’

The governor’s comments came in response to a reporter’s inquiry about the state’s stance on the event, after aspiring Florida congressman Anthony Sabatini called for an ’emergency’ session of the Florida Legislature that would discuss charging parents with a felony if a child is brought to a drag show in the Sunshine State.

In Sabatini’s online plea, which came in the form of an email to state officials, the congressman cited a similar drag event being advertised in West Palm Beach last Sunday, called ‘Pride on the Block: Drag Show for Kids.’

The email included a proposal to terminate the parental rights of a parent and charge them with a felony if they bring a child to such a show.

‘I have full confidence that governor DeSantis will support his bill,’ Sabatini, whom is running for Florida’s 7th Congressional District, wrote. ‘Any adult who forces children into these drag sex shows should be charged with a felony.’

The right-wing rep added: ‘What happened in Texas was criminal.’

He also asked in a tweet: ‘When will the sexualization of children stop?’

During his address Wednesday, DeSantis hinted that the state may already on track to implement such a guidance, cryptically telling onlookers: ‘I’ve asked my folks to look.’

He went on to assert that he wanted kids in his state in a ‘normal environment’ and let ‘kids be kids’ – without having political agendas ‘shoved down their throats’ by various groups.

The governor’s comments came in response to a reporter’s inquiry about the state’s stance on the event, after aspiring Florida congressman Anthony Sabatini called for an ’emergency’ session of the Florida Legislature that would discuss charging parents with a felony if a child is brought to a drag show in the Sunshine State

The conservative governor went on to point out some of the ‘inappropriate’ activity seen in footage of the Saturday night show that kids had been exposed to at the North Dallas bar – such as being encouraged to put money in the underwear of the drag performers.

‘You had these very young kids, and they must have been like 9, 10 years old, at a quote, “drag show,” where they were putting money in the underwear of this-‘ an irate DeSantis said before eventually trailing off. ‘That is totally inappropriate. That is not something that children should be exposed to.’

The famously anti-woke politico added: ‘We probably- we may have the ability to deal with that if something like that happens,’ suggesting his state was working on ways to prevent Florida parents for exposing their young to similar activities.

DeSantis’ comments came on the heels of those of fellow Republicans Lauren Boebert of Colorado and Marjorie Taylor Greene of Georgia, both congressional reps for their respective states. They were in agreement that drag shows should be ‘illegal’ for minors.

‘It should be illegal to take children into Drag Queen shows and strip clubs,’ Greene wrote in a post to Twitter Sunday, shortly after video of the event emerged, spurring debate over gender politics and child abuse online.

She added: ‘There should be no federal funding for any school that intentionally confuses children about gender/sexuality. Any teacher or school employee caught doing so should be fired and lose all benefits.’

DeSantis’ comments came on the heels of those of fellow Republicans Lauren Boebert of Colorado and Marjorie Taylor Greene of Georgia, both reps for their respective states. They were in agreement that drag shows should be ‘illegal’ for minors

The controversial event has sparked newfound debate across the country about issues surrounding gender identity and children – with DeSantis Wednesday ‘really, really disturbing.’

Photos and footage from the Saturday show showed adults sitting on stools surrounding a long narrow runway stage in the middle of the room.

As parents sipped on drinks with kids seated at their side, drag queens in dresses and glittered leotards danced along the stage, at times inviting the children to walk down the runway with them.

The drag queens snatched dollar bills from children’s outstretched hands, all beneath the glow of a pink neon sign reading, ‘It’s not gonna lick itself.’

Protesters outside of Mr. Misster on Saturday. The demonstrators accused the parents in line of enabling democrats to endorse pedophilia

Kids danced alongside drag queens beneath this large neon sign at the event at Mr. Misster on Saturday. ‘It’s not gonna lick itself!’ the sign reads in large pink letters

A drag queen can be seen accepting dollar bills from audience members. Children can be seen handing over cash to the performers too

A kid handing over dollar bills to drag performers at the Mr. Misster gay nightclub at a family drag show on Saturday, June 4

An online brochure for the event that urged parents to bring their kids to the event – despite suggestive undertones and the dubious venue.

It continued: ‘Do you want to hit the stage with the queens? We have FIVE limited spots for young performers to take the stage solo, or with a queen of their choosing! Come hangout with the Queens and enjoy this unique pride experience, fit for guests of all ages!’

The event was met with vitriol by Texans, who came out in full force to protest the show outside the bar Saturday, before its start.

The demonstration saw protesters criticize parents lining up with their children to see the event, accusing them of ‘grooming’ and endangering the kids.

‘I only have one question, why do you want to put an axe-wound in between your son’s legs?’ one protester was filmed telling the parents through a megaphone, to which a mother responds, ‘We’ve got kids here, please go away.’

‘That’s the point,’ the man answers back in the footage.

A drag queen performing at the ‘Drag Your Kids to Pride’ event at a Dallas gay night club on Saturday, June 4. Children can be seen sitting on stools lining the runway

A drag queen performing at Mr. Misster on Saturday as children in the audience look on. Kids could be seen handing dollar bills to the performers

The banner for the event’s online brochure. Organizers characterized it as an opportunity for people to share joy about who they are. It has since sparked outrage across the country, with many questioning the legality of bringing kids to such a show

One woman protesting says she saw a poster for the event and was emboldened to come out and protest.

‘I live in this community,’ the woman told ABC 8, ‘I have for several years. I don’t believe that I should be seeing signs advertising for children to be dancing on stage with men in thongs and in inappropriate clothing and makeup. I do not in any way condone the behavior that these people are engaging in, but what drags me out here is it’s kids now.’

A representative for the bar however said that the event provided a safe and family friendly space to celebrate people being who they are.

A protester confronts people waiting outside of the Mr. Misster gay bar on Saturday after the ‘Drag Your Kids to Pride’ event at the nightclub. Police arrived to maintain order

Supporters of the event unfurl a pride flag in front of a protester outside of Mr. Misster. The event took place on June 4, just as pride month kicked off across the country

‘We are more than happy to open our doors to celebrate Pride in a family friendly, safe environment, separate from our normal operations of 2 p.m. – 2 a.m. on Saturdays because we believe that everyone should have a space to be able to celebrate who they are. Mr. Misster is a place where everyone is welcome to feel accepted, safe and included,’ staffers said in a statement.

‘We had a group of protestors outside yelling homophobic threats, transphobic remarks and vile accusations at these children and parents. It is so sad to see that in 2022, there are people that still want to protests others celebrating who they are, but our staff and wonderful officers helped keep us safe and kept the protestors at bay.’

The representative for the bar also noted that the raised money for a youth LGBTQ+ organization in the community.

Controversy around the event comes as Pride Month kicks off in the US, amid debates over the role of gender-identity exposure and education to children.

In March, Florida Gov. Ron DeSantis signed into effect a parental rights bill that bans teachers from giving classroom instruction on ‘sexual orientation’ or ‘gender identity’ in kindergarten through third grade – popularly panned by the left as the ‘Don’t Say Gay Bill.’

The guidance, officially titled The Parental Rights in Education bill, will become law from July 1, and teachers who breach its regulations can be sued by parents.

‘Part of the reason why we fought the fight with parents’ rights in education is because there’s a movement to inject these things like gender ideology in elementary schools, even,’ he said.

‘My view is our schools need to be teaching these kids to read and write and add and subtract and do the things (that are) supposed to be done in school. Injecting these agendas into it is wrong.’