Covid is not more likely to cause depression than other respiratory infections, study claims 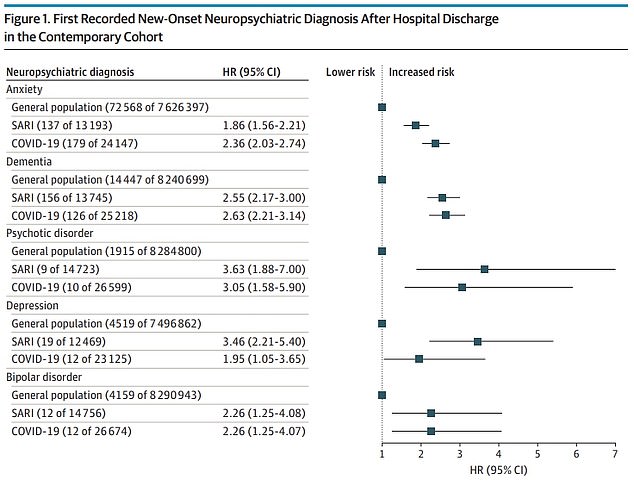 
Covid is no more likely to cause depression, anxiety or other psychological issues than separate serious infections, a major study claims.

Oxford University researchers found the rates of psychiatric disorders were ‘similar’ among people hospitalised with Covid and people admitted for other respiratory illnesses.

They looked at around 17,000 patients admitted for Covid in England between January 2020 and July 2021 and matched them to 32,000 people admitted for a different respiratory infection between 2015 and 2020.

The results were compared to baseline rates of psychiatric disorders among almost 8million members of the public.

Results showed people who survived severe Covid were nearly twice as likely to be diagnosed with depression a year after they left hospital compared to the general public.

But those admitted for other serious infections – such as flu, pneumonia or — were at a three-and-a-half times increased risk.

Covid patients were also three-and-a-half times more likely to develop anxiety than members of the public in the year post-discharge, while those with other infections were at a 86 per cent increased risk.

It comes as scientists still struggle to define ‘Long Covid’, the umbrella term given to a wide-range of symptoms reported by people who survive the virus.

The authors suggest people who are severely ill with Covid should be treated in similar ways to other respiratory viruses over the long-term.

Writing in the paper, published in JAMA Psychiatry, they said the risk of phycological disorders after severe Covid ‘were found to be similar to those for other SARI [Severe Acute Respiratory Infections].

They added: ‘This finding may inform postdischarge support for people surviving SARI.’

What is Long Covid?

As of January 2, an estimated 1.33million people in the UK were estimated to have long Covid.

Long Covid is an informal term, used to describe ongoing symptoms following a Covid infection that go on longer than four weeks, according to the ONS.

A dizzying array of symptoms have been attributed to long Covid, including:

There is no cure for the condition though the NHS does recommend a number of treatments designed to help alleviate the symptoms.

The study also found those with Covid were also at less risk of psychotic disorders and had the same chance of becoming bipolar later down the line.

It comes after a raft of other studies suggested long Covid could be being drastically overreported, with people having symptoms from separate illnesses.

An Office for National Statistics report in March showed only one in 100 primary-aged pupils actually have the condition, despite half of parents reporting at least one of its symptoms.

But there is evidence that Covid can damage vital organs and interfere with the brain, due to the way it spreads through the blood.

The groups were matched for age and other factors that may influence a person’s risk of developing health conditions.

Admission for Covid included all hospital patients who had tested positive for the virus 14 days after being admitted.

In contrast, SARI hospitalisations were only recorded if the viruses were the prime driver of being admitted.

These were compared for the groups who had Covid, SARI or were not admitted with either illness.

People with Covid were more likely to develop all five illnesses than those who were not admitted during the year.

But they were at no greater risk than those admitted for SARI for bipolar disorder.

Both illnesses had 126 per cent greater risk than not having the virus.

SARI saw a 246 per cent greater risk of developing depression than those not admitted. The risk was only 95 per cent in Covid survivors.

Meanwhile, the risk for psychotic disorders was higher for SARI survivors (263 per cent) than Covid (205 per cent).

The researchers said the differences were not statistically significant because the numbers diagnosed with psychological conditions were small in both groups.

Professor David Livermore, a medical microbiologist at the University of East Anglia, told MailOnline: ‘These authors looked Covid patients who were sick enough to be hospitalised, and have found that their incidence of subsequent psychiatric illness is no higher than among patients who’ve had other severe respiratory tract infections.

‘This is interesting, and adds a piece to the jigsaw, but tells us nothing about the folks who say that they’ve still lost their sense of smell six months after an otherwise mild dose of Covid.’

An Office for National Statistics (ONS) report estimated 1.33million adults were suffering symptoms of long Covid as of January 2. The graph above shows the change in long-Covid prevalence during the pandemic but gives the rate in thousands

Despite the most recent study allaying some fears around long Covid in hospitalised patients, other research has suggested the condition is more common in less severe virus cases.

Long Covid is defined as having lingering symptoms of the virus for more than a month after infection.

It is a poorly understood condition with sufferers normally reporting extreme tiredness, breathing difficulties, a loss of smell, and problems concentrating.

But it has been linked to an array of other symptoms like joint pain, nausea, insomnia and depression.

Professor Livermore said: ‘The trouble with “long Covid” is that it unhelpfully lumps together several different groups of patients.

‘First, people who are making a slow recovery from severe illness that led to them being hospitalised.

‘Second, those who have significant persistent symptoms – shortage of breath or loss of taste – months after more or less severe infection

‘Third, those who have a single symptom, sometimes something as vague as “brain fog” that has lasted four weeks but which is likely to have resolved by 12 weeks.

‘Some “long Covid” seems to reflect persistent inflammation and is physiological, whereas some is psychological.’