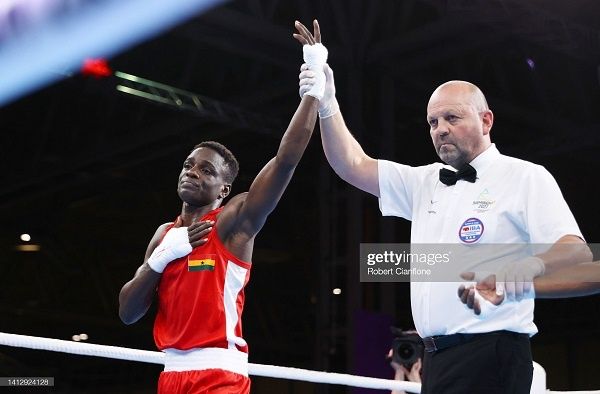 
Ghanaian boxer Abraham Mensah secured for himself a place in the medal zone of the Commonwealth Games after recording a 3-1 split decision victory over Rukmal Prassana of Sri Lanka in their quarter-final clash in the bantamweight division at the NEC Hall on Thursday.

Mensah won the first two rounds but lost the third round to earn a deserved victory which earned him a place in the semi-final and an automatic medal.

He joins Black Bombers teammates Joseph Commey and Abdul Wahib Omar who have also qualified for the semi-finals in their divisions and are also guaranteed a medal each.

After the win, Mensah paid tribute to his trainer for guiding him to win the fight. He said the strategy to win the first two rounds and move around in the final round worked perfectly.

Now, his focus is to reach the final and win a gold medal.

“Everyone has to thank my coach for this win because he was instrumental in this victory for Ghana and I really appreciate him.

“The plan was to attack from the first round so you can kill the game before it ends and that was why I started attacking from the opening round”.

Excited at guiding three of his boxers to the medal zone, Black Bombers head trainer, Kwasi Ofori Asare, said his young boxers had made a strong case again for the government to pay more attention to amateur boxing and put in more investment to develop the talents that abound in the sport to win laurels at such international competitions.

He told Graphic Online that the fisticuff sport had continuously made a statement at international competitions and deserved better treatment.

“We targeted at least three medals and we have been able to achieve that and I can only be proud of my fighters and technical team,” said Coach Asare.

“Boxing continues to prove to the nation that with a lot of investment, we can win more medals for the state at international competitions.

“I want to take this opportunity to appeal to the state to take a position in helping the sport with infrastructure to help us in our preparations for tournaments.”