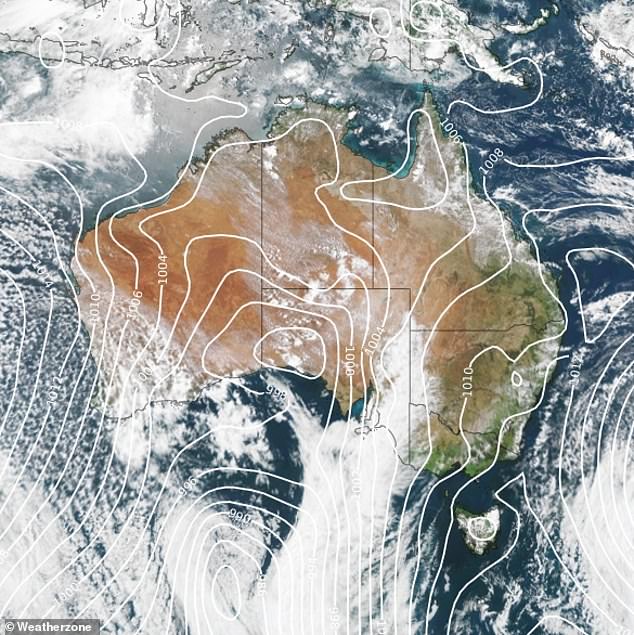 Australia is set to be battered by another cold snap early next week with temperatures as much as 10C lower than average.

Forecasters believe the mercury will peak in Victoria, Tasmania and southern NSW at just 15C on Monday.

It will be nearly as cold at 3pm on Monday as 3am on Sunday, they added, with the temperature between 5C to 10C lower than usual.

To make it worse, heavy rain could also batter southeastern Australia at the same time.

A cold snap is on the way and forecasters believe temperatures will peak across Victoria, Tasmania and southern NSW at just 15C on Monday

It will be nearly as cold at 3pm on Monday as 3am on Sunday, with the temperature between 5-10C lower than usual

‘The proper cool change comes through late Sunday into South Australia and that will drop temperatures big time as we move into Monday,’ Sky News Weather meteorologist Rob Sharpe said.

‘It’s going to feel just like it did on Melbourne Cup day in Melbourne.’

In Victoria, warm weekend temperatures will drop into the teens on Monday, with a similar trend in Hobart.

South Australia will see highs of 25C in Adelaide on Friday and Saturday, before it will drop to 19C on Sunday and then 17C on Monday.

It could also be as low as 10C on Monday.

Showers on Friday will get heavier on Saturday, with a storm also being possible before further rain on Sunday and Monday.

Weatherzone said that ‘yet another’ strong cold front was heading from west to east.

‘It would be classed as a strong cold storm in June, July or August, but as November systems go, it is seriously cold,’ Weatherzone’s Anthony Sharwood wrote.

Hobart will go from a high of 18C on Friday and 22C on Saturday to 15C on Monday with a low of 7C to start the week. It could also see 5-16mm of rain over the weekend.

Tasmania’s west coast will be even wetter with Strahan expected to see developing rain on Saturday and then 20-30mm on Sunday and up to 35mm on Monday.

Canberra will meanwhile see highs in the low twenties over the next couple of days, then 18C on Sunday and 13C on Monday.

A low of 7C on Monday is to be expected with showers most days.

Southern parts of NSW, such as Wagga Wagga, will feel the chill on Monday as well some showers, but Sydney and northern areas will escape the bad weather.

‘Sydney, Newcastle Port Macquarie – dry as a bone no rain on the way,’ Mr Sharpe said.

‘It’s been a while since we’ve been able to see that kind of thing for more than a week at a time.’

Sydney will see highs of 22C on Friday, 24C on Saturday and then almost 30C on Sunday.

On Monday, there will be only a slight dip down to 26C.

Brisbane will see 26C on Friday, up to 32C on SAturday and then 34C on Sunday, though some rain could falls.

Meanwhile, Perth will reach 17C on Friday with a low of 11C overnight. Then the mercury rises to 20C on Saturday, 23C on Sunday and 29C on Monday.

Tuesday could even see the city break the 30C barrier.