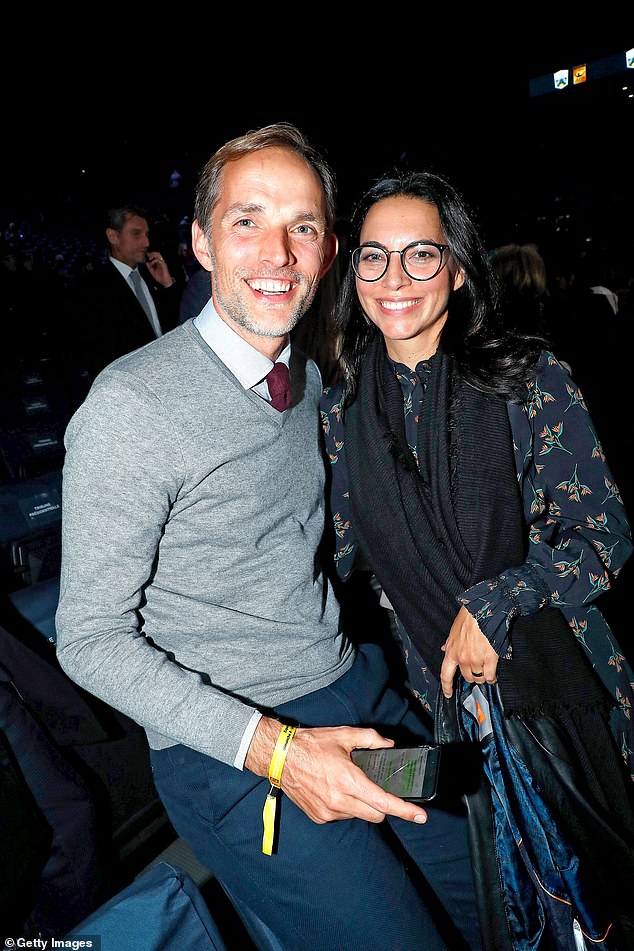 
Chelsea manager Thomas Tuchel has been spotted having a relaxing holiday with his new flame, just days after splitting from his wife.

The German coach has been in Sardinia with his new Brazilian girlfriend, Natalie Max, as he took a break before resuming preparations for the new season.

The 48-year-old, who had been married to journalist Sissi Tuchel for 13 years, was granted a divorce by a judge at London‘s High Court last week.

The Blues boss was seen with 35-year-old Ms Max on a boat at the Mediterranean Island where they were seen holding hands and laughing as they swam in the sea.

He made the trip with the business owner during a short break between his team’s tour of the United States which ended on Sunday and a friendly with Italian side Udinese tomorrow.

Tuchel, pictured here with his ex-wife Sissi, was granted a divorce by a judge at the High Court in London last week

The pair, both of whom have two daughters, are staying in a villa which costs £20,000 a night, the Sun reports.

One holidaymaker told the paper: ‘They looked very much in love. At one stage Natalie ran her hand round the back of his neck and leaned in for a kiss.

‘They went swimming, chilled on the beach, lunched in the hotel’s restaurant and got a boat to the island of Caprera.’

The former Paris Saint-Germain and Borussia Dortmund manager was granted a divorce by Mr Justice Mostyn at the High Court in London on Wednesday after he was satisfied there was no way of salvaging the marraige.

Mrs Tuchel had filed for divorce at the end of March, citing irreconcilable differences, with one source telling the Mail on Sunday that they had tried to avoid splitting but ‘in the end there was no other way.’

They added that it was ‘very sad and now it is all about making sure their daughters are the top priority’.

Mrs Tuchel had moved to Britain last August seven months after her husband had come to the UK after being given the Chelsea job.

He had initially stayed in a hotel in Cobham, Surrey, near to the club’s training ground.

The Chelsea boss, who is reportedly pay £7million a year, is believed to have reached a settlement with his former wife.

She had given up her job at the German newspaper Süddeutsche Zeitung to bring up their family, so may be entitled to a slice of his future earnings as well as up to half of his current fortune.

It comes just over a year after Mrs Tuchel was seen running across the pitch at Porto’s Estadio do Dragao before leaping into her husband’s arms after Chelsea secured a 1-0 Champions League victory over Manchester City.

His collapsing marriage came as off-field issues became the main focus at Chelsea towards the end of last season, with previous owner Roman Abramovich selling the club after being sanctioned by the government for Russia’s invasion of Ukraine.

Since then the club has been taken over by consortium led by American businessman and investor Todd Boehly and a number of key players have left the club, including striker Romelu Lukaku and defenders Antonio Rudiger and Andreas Christensen.

While dealing with on and off-the-field issues last season, Tuchel also had to cope with the collapse of his marriage

The manager has been left frustrated so far in pre-season as key transfer targets fail to materiliase,  with only England forward Raheem Sterling and and Senegalese defender Kalidou Koulibaly being brought into the club from Manchester City and Napoli respectively.

His Chelsea team, which finished third in the Premier League last season, have been preparing for the new campaign with a tour of the United States over the last several weeks.

It was a disappointing tour for Tuchel and his team as they struggled for results, losing to MLS side Charlotte FC on penalties and being thrashed 4-0 by London rivals Arsenal.

His squad will face Italian team Udinese in a friendly tomorrow, before kicking off the new campaign with a trip to Everton on Saturday, August 6.

Share. Facebook Twitter Pinterest LinkedIn Tumblr Email
Previous ArticleJudge rules Britney Spears will not have to sit for deposition in ongoing legal battle with her father
Next Article “If you get liver, show your face” – Apostle Johnson Suleman dares blogger who claimed he is diabolic and has had extramarital affairs with some actresses (video)

Manchester United’s game plan went ‘in the bin’ during 4-0 defeat, according to manager Erik ten Hag