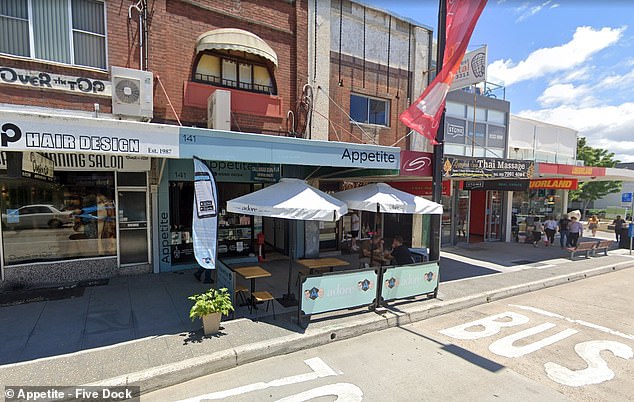 
A Sydney café owner has broken down in tears during an emotional TV interview fearing his business ‘cannot survive’ amid rising cost pressures and an increase to the minimum wage.

The Fair Work Commission on Wednesday awarded Australia’s 2.7 million minimum wage and low-paid workers a 5.2 per cent wage rise to keep up with spiralling inflation – the most generous bump in 16 years.

But while the much-needed pay rise is a windfall for workers, business owners are feeling the pinch and say they ‘can’t afford it’.

Phillip Salhab who runs the Appetite eatery in Five Dock tried to put on a brave face when speaking about the possibility of going bust on Sky News.

He told reporter Peter Stefanovic he’ll ‘save his tears for the pillow’ before eventually becoming overwhelmed and admitting: ‘It would be a lot easier to close’.

‘While we accept the increase in the minimum wage for our team to keep up with the cost of living pressures, we as a business cannot afford it,’ he said.

‘I appreciate they are going to give us until October 1, but what guarantee is there that everything will be back to normal.’

Mr Salhab said he is already paying well above minimum wage to his staff as the hospitality industry faces a massive shortfall of workers.

‘Workers are putting us up against each other from interview to interview telling us what they’ve been offered and getting us to hopefully match or beat it and we just cannot do it,’ he said.

‘We are looking for a kitchen hand at the moment and other venues are offering… $42 an hour, it would be a lot easier for us to close.’

Phillip Salhab (pictured) told reporter Peter Stefanovic he’ll ‘save his tears for the pillow’ before eventually becoming overwhelmed and admitting: ‘It would be a lot easier to close’

He added that the rising costs for fresh food including bread and coffee is also making the business unviable and that continuing to jack-up prices is not longer an option.

‘There is only so much people want to pay for a bacon and egg roll,’ he said adding that’s his is the best in Five Dock.

‘I as a consumer myself cannot justify paying more than $13.50 for a bacon and egg roll.’

The café opened under dire circumstances just six weeks before the first lockdown in 2020.

Mr Salhab said if it wasn’t for diehard community support, ‘we probably wouldn’t still be here’.

Now he’s not sure how much longer that support can last as he facing the prospect of shutting down.

The rise for the low-paid was also the highest since 2006, when a 5.7 per cent lift was awarded during the mining boom, but was slightly below the ACTU’s push for a 5.5 per cent increase.

The minimum wage increase is more than double the wage price index of 2.4 per cent, in the year to March, to cope with inflation soaring at 5.1 per cent – the fastest pace in two decades.

The industrial umpire announced the ‘proportionately higher’ pay decision shortly after 10am, Sydney time, after Reserve Bank of Australia governor Philip Lowe predicted inflation in 2022 could hit seven per cent in 2022 for the first time since 1990.

Prime Minister Anthony Albanese‘s new government had put in a submission calling on the Fair Work Commission to match the 5.1 per cent inflation rate so real wages after inflation didn’t go backwards.

Australia’s 2.7 million minimum wage and lowest-paid workers on awards have received a 5.2 per cent pay increase – the most generous in 16 years to cope with soaring inflation and cost of living pressures (pictured is a waitress in Sydney)

Minimum wage increase at a glance

The increase was above the 5.1 per cent inflation rate and was the most generous since 2006 during the mining boom

It was more than double last year’s 2.5 per cent increase

The decision to award a 5.2 per cent minimum wage increase directly affects 180,000 workers

The other low-paid workers on modern awards are getting a 4.6 per cent increase if they earn more than $869.60 a week and will get $40 more  a week

Fair Work Commission president Iain Ross announced a 5.2 per cent increase for those on the minimum wage and a 4.6 per cent rise for those covered by modern awards earning more than $869.60 a week.

Both sets of low-paid workers are receiving a $40 a week boost.

‘This level of increase will protect the real value of the wages of the lowest paid workers,’ he said.

‘The present circumstances warrant an approach which gives a greater level of support to the low paid while seeking to contain inflationary pressures.

‘We propose to award a proportionately higher increase to lower-paid employees.’

Justice Ross said high inflation particularly affected the low paid and rejected calls from employer groups to award no increase or a small 2.5 per cent rise – in line with the 2021 minimum wage increase.

‘The sharp rise in inflation impacts business and workers,’ he said.

‘The level of minimum wage increases proposed by various employer bodies would result in real wage reductions for award-reliant workers, many of whom are low paid.

‘The low-paid are particularly vulnerable in the context of rising inflation.’

Justice Ross noted the 6.6 per cent annual rise in food prices made cost of living pressures particularly hard for the low-paid.

‘The increased cost of non-discretionary items will particularly impact low-income households and many low-paid workers,’ he said.

‘We have concluded that the changes in the economic context weigh in favour of an increase in the national minimum wage and in modern award minimum wages.

From July 1, this will see the low paid receive $812.60 a week, an increase of $40, and $21.38 an hour, up $1.05. The Fair Work Commission awarded an increase slightly above inflation as part of its annual national wage review affecting one in four workers (pictured is a department store worker in Melbourne)

‘We are conscious that the low-paid are particularly vulnerable in the context of rising inflation.’

But Council of Small Business Organisations of Australia chief executive Alexi Boyd said many business struggling with higher input costs would be upset with the minimum wage decision.

‘When small businesses hear that, they’re going to be disappointed,’ she told Daily Mail Australia.

Ms Boyd argued a higher minimum wage would push up production costs and make it harder for small businesses to keep costs down for consumers as they faced higher rent, petrol and compulsory superannuation costs.

Prime Minister Anthony Albanese ‘s government had put in a submission calling on the Fair Work Commission to match the 5.1 per cent inflation rate so real wages after inflation didn’t go backwards

‘In many cases, small businesses are already feeling those pressures,’ she said.

‘They’re worried about losing their customers.

‘We’ve got a situation for small businesses where although many of them won’t be affected directly by this minimum award increase, it’s another cost that’s going to go up and will add to the cost of running a small business.

‘They’re at the end of the supply chain in many cases.

ACTU secretary Sally McManus said the union movement was ‘happy and proud’ of the increase, despite it being marginally less than what it had called for.

‘It’s going to make a big difference for so many workers,’ she said.

While the low-paid working in retail will receive a pay increase on July 1, workers in the tourism and hospitality sectors will have to wait until October 1.

The Australian Chamber of Commerce and Industry, which represents 9,000 employers, was dismayed with chief executive Andrew McKellar describing the decision as a ‘very significant risk to the economy’ that would cost affected businesses $7.9 billion during the coming year.

ACTU secretary Sally McManus said the union movement was ‘happy and proud’ of the increase, despite it being marginally less than what it had called for

How employer groups and unions react

AUSTRALIAN CHAMBER OF COMMERCE AND INDUSTRY: ‘This adds very significant costs to the Australian economy and to business’ – chief executive Andrew McKellar

ACTU: ‘It’s going to make a big difference for so many workers’ – secretary Sally McManus

‘It veers very much towards the upper end of the range of possible outcomes that we could have expected to have seen today,’ he said.

‘This adds very significant costs to the Australian economy and to business.’

‘Today’s Annual Wage Review decision of the Fair Work Commission will add fuel to the inflation fire,’ he said.

Justice Ross said the Fair Work Commission accepted the need for ‘moderation’ to contain inflationary pressures and noted compulsory employer superannuation contributions would be rising to 10.5 per cent from July 1.

Overall pay increases have been stuck below the long-term average of three per cent since mid-2013 despite unemployment in April sinking to a 48-year low of 3.9 per cent.

‘The improvement in the labour market is forecast to continue in the period ahead,’ Justice Ross said.

‘There has also been a sharp rise in the cost of living since last year’s review.’

During the election campaign Mr Albanese said he ‘absolutely’ supported the idea of the Fair Work Commission awarding a 5.1 per cent pay rise to minimum wage workers.

Employer groups including the Australian Chamber of Commerce and Industry and the Australian Industry Group had called for increases of between 2.5 per cent and 3 per cent.

ANZ had expected a 4.5 per cent increase in the minimum wage