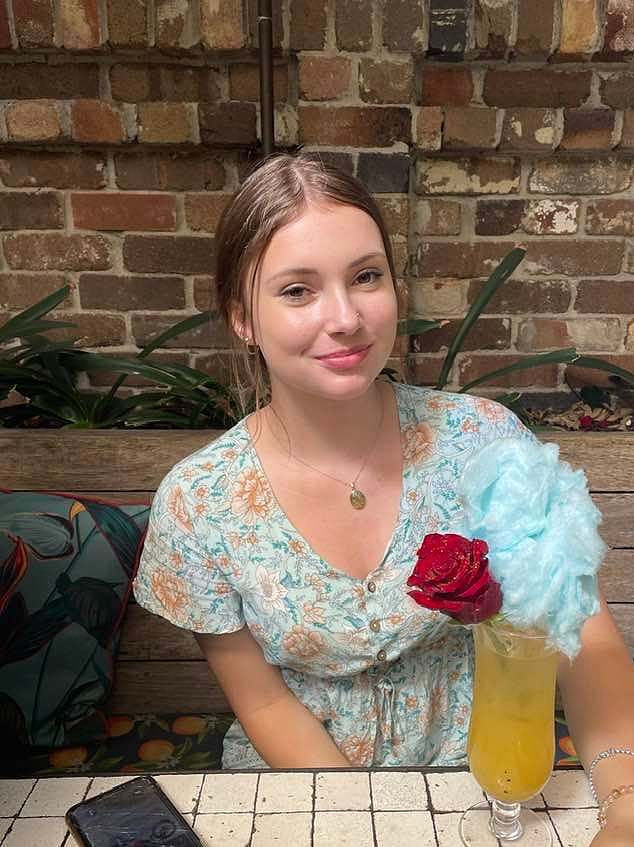 
Gutted residents of a tight-knit community have come together for the second time in two days to say goodbye to another teenage victim of a tragic ute smash that took five young lives.

Lily van de Putte, 15, died in Buxton, south-west of Sydney, on September 6 when a Nissan Navara ute smashed into two trees, split in half and killed everyone except the alleged P-plate driver – 18-year-old Tyrell Edwards.

Summer Williams and Gabriella McLennan, both 14, also lost their lives in the smash, along with fifteen-year-old boys Antonio Desisto and Tyrese Bechard.

Tyrese’s funeral was the first of the five, and took place on Thursday morning at HisHouse Church in Picton – which Lily’s father, John van de Putte, attended.

Emotions ran high at Lily’s service at St Anthony’s Catholic Church in Tahmoor on Friday afternoon, as devastated friends and family gathered to mourn yet another young person whose life was taken too soon.

Locals have rallied around the victims’ families – pledging their support by decorating their homes, gardens, shop fronts, and vehicles with balloons in five different colours to commemorate each of the teens. Lily’s colour is purple.

Party supplies stores in the area have been giving balloons away, free of charge.

Lily Van De Putte, 15, was one of five teens killed after the car they were in smashed into a tree on Tuesday night

Lily’s casket was decorated with painted flamingoes, leaves and flowers – topped with a large bouquet of pink and red roses

Lily was farewelled by friends, family and schoolmates in an emotional service on Friday morning

The hearse arrived before the ceremony arrived on Friday afternoon.

The small, green casket decorated with painted flamingoes, leaves and flowers – topped with a large bouquet of pink and red roses.

Friends and family hugged as they arrived at the church, with many standing around  the hearse waiting for the casket to move inside.

Scores of teenagers, teachers from Picton High School, and family members arrived with bouquets of flowers – many attended Tyrese’s funeral the day before.

As they laid eyes on their friend’s brightly-decorated coffin, many started crying and hugging.

A slideshow featuring photos and videos of Lily as a small child played outside the church before the service – while ‘Forever Young’ played in the background.

‘Lily’ was painted in gold on the side of the coffin.

Her father, John van de Putte, arrived in his wheelchair with an entourage of close family members and friends for his daughter’s funeral – draped in metallic purple.

Lyrics from The Story by Brandi Carlile, which were read out at Lily’s funeral on Friday

Mr van de Putte previously told Daily Mail Australia that his daughter had been staying with Gabriella’s family on the night of the accident because he was in hospital and her mother was in Melbourne tending to a sick family member.

At about 7pm that night, the girls asked Gabriella’s parents if they could go out for ice-cream.

They were allowed to go, provided Lily phoned her mother to ask for permission.

She never called her mother, but told her best friend’s parents that she did and that was allowed to go out.

Mr van de Putte described Gabriella’s mum and dad as ‘the strictest parents in the world’ who decided to give their daughter some leeway and let her make the two-minute trip to McDonald’s for ice-cream.

Gabriella had never been allowed to ride in the car with a P-plate driver before last Tuesday – prior to that, she had only ever been driven around by close family members.

The teens were permitted to go out for an hour, but the parents began to worry when the girls were weren’t home by 8pm.

When calls to their phones went unanswered, Gabriella’s father went out to look for them and stumbled upon the wreckage.

Lily van de Putte, 15, (pictured) who died last Tuesday in a ute crash, along with four of her friends

Mr van de Putte does not harbour any ill feelings towards Gabriella’s parents ‘at all’, and has tried to encourage them not to blame themselves.

When asked about his last conversation with Lily, the doting dad remembered it fondly.

He was about to be taken to hospital before kidney surgery – a relatively standard procedure for people who have multiple sclerosis, like Mr van de Putte.

Lily was worried, but he tried to assure her that everything would be OK, giving her one last kiss and hug and saying: ‘You have nothing to worry about. It’s only a simple operation, I love you and I’ll see you tomorrow.’

The father recalled: ‘Then she ran out into the driveway to give me a hug, and I left.’

Overnight on Tuesday, while he was unconscious, Lily – who was an aspiring electrician – sent him a text message that read: ‘Dad, can I go out?’

He read that message on Wednesday morning, and said he knew she was gone because he had multiple missed calls and his son came into his hospital room in tears.

A family friend set up a Go Fund Me campaign for Lily’s family following the tragic accident.

Driver Tyrell Edwards, 18, was the sole survivor of the crash and has been charged with five counts of dangerous driving occasioning death

Police allege Edwards used his phone to film Snapchat video of himself swerving at 90km/hour, before he allegedly hit two large trees which split the ute in two.

He was taken to Silverwater’s Metropolitan Remand and Reception Centre.

Witnesses alleged the car travelled at ‘high speeds’ and was on the wrong side of the road, before coming back to the right side, before the crash.

According to court documents, four of the teens were thrown from the back of the vehicle.

They were found a ‘short distance away, trapped by confinement’.

Edwards was allegedly unable to free himself from the wreck, while another victim was trapped in a passenger seat.