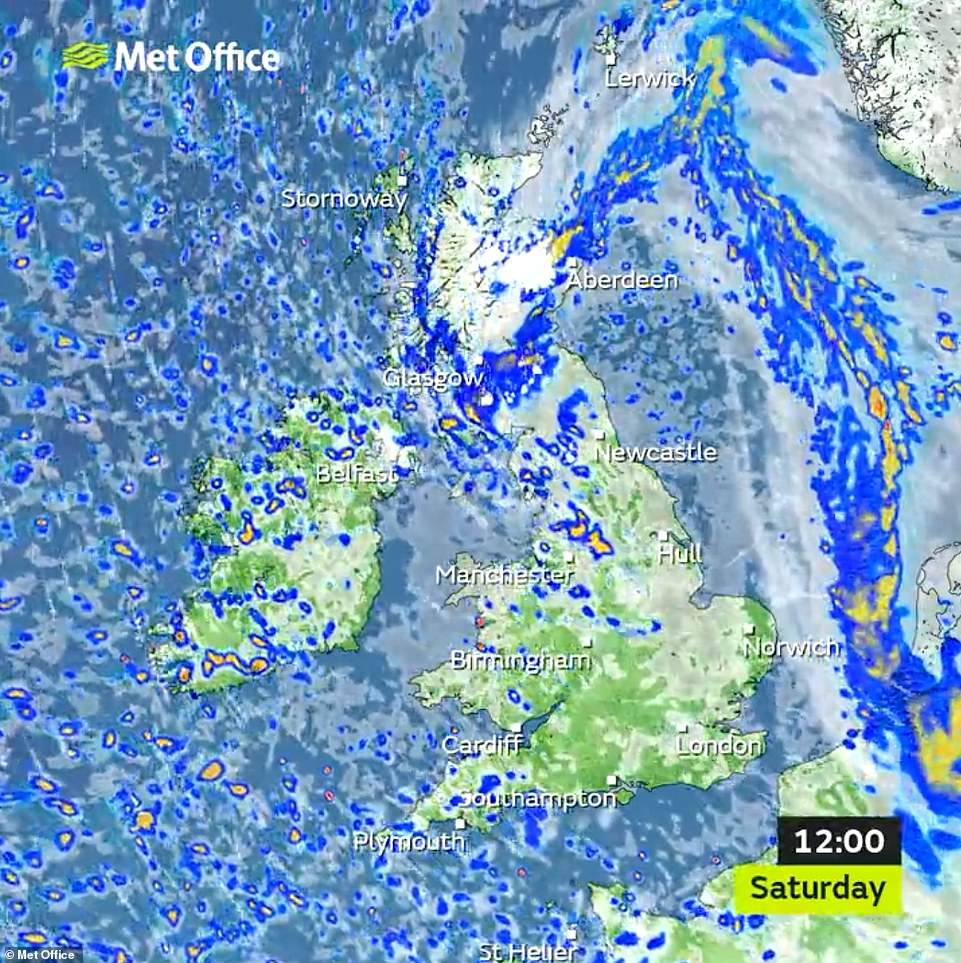 
Blistering winds and five days of snow are set to send temperatures plunging across Britain this week – as thousands of vulnerable people are still without power following deadly Storm Arwen.

The latest weather data is predicting five consecutive days of snow set to start today, with much of it falling over higher ground in the north of the country.

Areas set to be most affected include the North Yorkshire Moors and Lincolnshire and eastern England, while strong winds and widespread rain are also predicted for the North West.

One forecast predicts a harsh overnight windchill could plunge some areas as low as -11C (12F) into the week as conditions become much more bitter.

The barrage of winter weather was also expected in the south, with parts of West London and Hereford plunging to -2C temperature overnight on Friday.

There are huge concerns for the thousands of people in northern England and Scotland who are still living without power eight days after Storm Arwen caused massive network damage to parts of the UK.

The latest national figures from industry body Energy Networks Association (ENA) showed about 9,200 homes were without power on Friday evening.

Residents are now bracing for almost freezing temperatures, with parts of northern England and Scotland expected to see lows of 1C (34F) along with sleet and rain over the next 24 hours.

The latest weather data is predicting five consecutive days of snow set to start today, with much of it falling over higher ground in the north of the country. Areas set to be most affected include eastern England, the North Yorkshire Moors and Lincolnshire while strong winds and widespread rain are also predicted for the North West

Britain is bracing for blistering weather conditions including five days of snow and an overnight windchill that could push temperatures as low as -11C – as thousands of vulnerable people are still without power following deadly Storm Arwen. Pictured: Huge waves at Blackpool North shore

Forecasters said that the north west of England would be battered by rain and wind today, while five days of snowfall and overnight windchill was expected to bite the Northeast coast and parts of Scotland. Pictured: Waves crash over tramlines at Blackpool earlier today

There are huge concerns for the thousands of people in northern England and Scotland who are still living without power eight days. Pictured: A welfare check is carried out on a resident of Weatherhill, County Durham on Friday – after the storm caused ‘catastrophic damage’ to the electricity network

Clear skies and strong winds in some areas today are set to push temperatures below freezing, while overnight chills could sending areas on higher ground plummeting as low as -11C (12F)

The harsh conditions even hit villages surrounding The Queen’s Balmoral Castle estate, with the skeleton staff at her Highlands home being battered by 90mph winds and blizzards, The Sun reported.

Met Office meteorologist Steve Keats said: ‘A couple of points to watch for will be winds, which under normal circumstances wouldn’t be an issue but if you’re trying to repair downed power lines it’s more sensitive.

‘Saturday is expected to be cold. There will be quite a mild windshield coming down from the northwest, so it’s going to feel not much above freezing for quite a lot of places.’

The long delays have prompted energy regulator Ofgem to warn it will take enforcement action against network companies which failed to restore power to customers quickly enough following the storm.

Ofgem announced on Friday it was launching a review of the companies’ response to the storm which left thousands of homes without electricity.

It has also agreed with firms to lift the £700 cap on compensation which could be given to customers.

The change will allow those affected to claim £70 for each 12-hour period they are left without power, after an initial £70 for the first 48 hours.

Chief executive Jonathan Brearley told the BBC Radio 4 programme: ‘We are deeply concerned about customers who for over a week have been without power.

‘We want to establish the facts and make sure we understand what has happened, whether the network companies have met their obligations. If they haven’t, we will take enforcement action.

It is predicted that a band of rain on Monday will be preceded by snow that could be widespread in Scotland, northern England and the Midlands, and North Wales. Pictured: Blackpool North shore

The Met Office said the weather is predicted to be cold, windy and showery with some hilly areas experiencing snow on Saturday. Pictured: The sunrise over Whitby, north-east England

Sunday will continue to be cold with some showers in the east of England while the west is predicted to have dry weather and some sunshine. Pictured: Whitby Abbey casts a shadow

‘We have clear expectations of how fast they should get people back on the system.

‘We do recognise the challenging circumstances those companies are in. But what we expect from the network companies is to be relentless in connecting people, but also to be putting support in place.’

Prime Minister Boris Johnson said: ‘My thoughts are with all those who are still affected by the terrible damage from Storm Arwen.

‘I want to thank the emergency responders and engineers who have been working tirelessly this week to try and restore power.

‘I also want to thank our brilliant Armed Forces who have been deployed rapidly to support those communities which are worst affected.’

The Ministry of Defence said 297 personnel from the British Army and Royal Marines are supporting civil authorities in areas impacted by Storm Arwen and are conducting door-to-door checks on vulnerable people in their homes and providing reassurance to local communities.

Eighty soldiers of 4 Royal Artillery based at Alan Brook Barracks in Topcliffe have deployed to Northumberland on Saturday to check on vulnerable people and identify where additional support is required, a statement said.

Defence Secretary Ben Wallace said: ‘Our dedicated Armed Forces personnel are working side by side with civil authorities to provide essential support to communities impacted by Storm Arwen.

Weather conditions today will see rain clearing eastwards, then most parts seeing a mixture of sunny spells and blustery showers. The showers heaviest and most frequent in the north and west, whilst more persistent rain and hill snow affects northern parts. Pictured: Sunrise over Whitby

‘The ability to deploy quickly to wherever in the UK assistance is requested makes us all safer and ensures we are able to look protect the most vulnerable in our society.’

The head of the energy market regulator has agreed with electricity companies to lift the cap on compensation for customers whose power was not restored quickly enough following Storm Arwen.

Ofgem announced on Friday it was launching a review of the companies’ response to the storm which left thousands of homes without electricity.

The agreement between the regulator and companies means customers could receive more than the cap of £700 if firms are found to have fallen short of their obligations.

Ofgem chief executive Jonathan Brearley told BBC Breakfast: ‘One thing we’ve done already is we’ve said to network companies, and they’ve agreed, they’ve lifted the cap on the compensation they will give customers and they’ll make sure that those customers do get some compensation for everything they’ve been through.’

He added: ‘What we want to do, simply, is establish the facts, make sure quickly that lessons are learned and, of course, if obligations haven’t been met, then we will pursue enforcement action.’

Supplier Scottish and Southern Electricity Networks (SSEN) said 950 properties were without power as of 10pm on Friday.

Northern Powergrid announced 5,100 customers, of 240,000 who lost power, are yet to be connected.

Western Power Distribution still had 254 without power while Electricity North West, which provides energy for an area between the Scottish border and Stockport, said 700 properties were without power as of 8pm on Friday night.

Meanwhile, SP Energy Networks said it had restored power to all 200,000 customers who were disconnected.