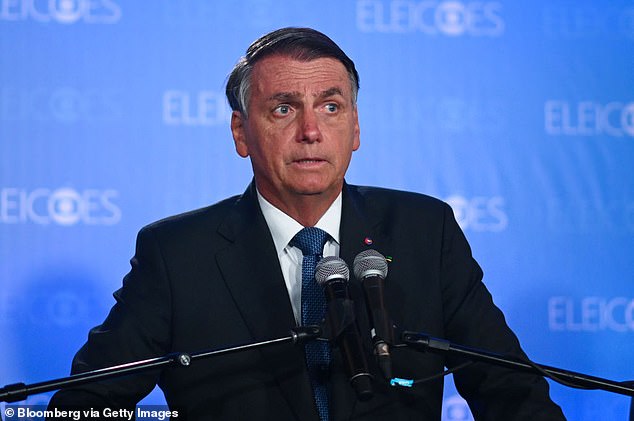 The presidential address may defuse protests by his angry supporters who have blocked highways in many states across Brazil, along with pro-Bolsonaro truckers calling for him to defy the electoral victory of Lula.

Bolsonaro has so far remained silent after veteran leftist Lula beat him in the election with 50.83 per cent of the vote compared to 49.17 per cent on Sunday night.

Bolsonaro’s political allies, including his chief of staff Ciro Nogueira, have already begun to establish contact with the Lula camp to discuss a transition.

Some, including the speaker of the lower house of Congress, have publicly said the Bolsonaro government should respect the election result.

But truckers, who have benefited from Bolsonaro lowering diesel costs, have called on Bolsonaro to defy the result. They have blocked highways with their vehicles and burning tyres across Brazil in protest against Lula’s victory.

The presidential address may defuse protests by his angry supporters who have blocked highways in many states across Brazil, along with pro-Bolsonaro truckers calling for him to defy the electoral victory of leftist Lula

Bolsonaro has so far remained silent after veteran leftist Lula (pictured celebrating election win) beat him in the election with 50.83 per cent of the vote compared to 49.17 per cent on Sunday night

Some truckers posted videos calling for a military coup to stop Lula from taking office.

The Brazilian supermarkets lobby has reported supply problems due to the protests and appealed to Bolsonaro to resolve the situation before shop shelves begin to empty.

The Supreme Court ordered police to remove scores of blockades that had blocked access to a key grains-exporting port, shut off the country’s largest airport started to affect the transportation of food and fuel.

The main access road to Sao Paulo’s Guarulhos international airport, the busiest in the country, was temporarily blocked by dozens of demonstrators and 25 flights were canceled, the airport said. But Governor Rodrigo Garcia said the highway was reopened on Tuesday morning.

‘We honest Brazilians are against the return of that gang that looted state coffers,’ said truck driver Vando Soares, opposed to the return to office of Lula, whose 2003-2010 presidency was marked by widespread corruption.

‘We are not moving until that bandit is stopped from assuming as president,’ he said.

Another demonstrator, Naiele Souza, said she thought Bolsonaro was waiting to see how the demonstrations went before addressing the nation.

Lula’s win represents a stunning comeback for the 77-year-old former metalworker, who governed Brazil from 2003 to 2010 but then spent time in prison for corruption convictions that were later annulled.

Lula has vowed to overturn many of Bolsonaro’s policies, including pro-gun measures and weak protection of the Amazon rainforest.

Meanwhile, it has emerged that Bolsonaro and his wife Michelle have unfollowed each other on Instagram following the election defeat, sparking rumours of a split.

In the hours after the result was announced, eagle-eyed observers noticed both Bolsonaro and his wife were no longer following each other

Addressing the rumours, Michelle, 40, posted a statement on her Instagram stories without following her husband back.

She said: ‘With regards to today’s article about my husband having unfollowed me on his Instagram, as Jair explained in several Lives, he does not manage his network.

‘We will always be together, loving each other in joy and in sadness. May God bless our beloved nation.’

The couple wed in 2007 and is Bolsonaro’s third wife and they share a daughter Laura together.

The president shares three sons with his first wife Rogeria Nantes Braga, and a son with his second wife Ana Cristina Valle.

Addressing the rumours, Michelle, 40, posted a statement on her Instagram stories without following her husband back

When he was in congress, Bolsonaro hired Michelle as a secretary and received a number of unexpected promotions and her salary tripled under his management.

He was then force to fire her over nepotism after the Supreme Federal Court ruled against him.

Ricardo Barros, Bolsonaro’s whip in the country’s Lower House, told The Associated Press by phone that he was with the president on Monday and that the president was ‘still deciding’ whether to speak about the election’s results.

Much like his political hero Trump, the outgoing Brazilian leader has repeatedly questioned the reliability of the nation’s electronic voting system.

At one point he said he possessed proof of fraud, though he provided no evidence.

Last month, he remarked that if he did not win in the election’s first round, something was ‘abnormal’ – even as most polls showed him trailing.

One meme that went viral earlier Monday featured a picture of a vaguely disoriented-looking Bolsonaro, with the caption, ‘Missing: elderly man, very talkative, has not been heard from in 12 hours.’

Pro-Bolsonaro truckers have set up roadblocks throughout the country to protest Lula’s return to power. Some truckers posted videos calling for a military coup

Truckers – who have benefited from Bolsonaro lowering diesel costs – are one of the president’s key constituencies, and they have been known to disrupt Brazil’s economy when they shut down highways

Charismatic but tarnished ex-president Lula defeated Bolsonaro by the narrowest margin in Brazil’s modern history – 50.9 percent to 49.1 percent – to return for an unprecedented third term.

Pro-Bolsonaro truckers and protesters have blocked highways in at least 11 states across the country, burning tires and parking vehicles in the middle of the road to halt traffic.

Wearing the yellow and green of the Brazilian flag – which the outgoing president has adopted as his own – the protesters wielded pro-Bolsonaro signs and sang the national anthem, before gradually being broken up by the authorities in some areas.

He was acting in response to a request by a transport federation that complained it was losing business.

Some key Bolsonaro allies have publicly recognized his loss, including the powerful speaker of the lower house of Congress, Arthur Lira.

And international congratulations for Lula poured in from the US, China, India, France, Britain, South Africa and numerous others.

Lula, who previously led Brazil from 2003 to 2010, criticized his nemesis Sunday night for not acknowledging the result.

‘Anyplace else in the world, the defeated president would have called me to recognize his defeat,’ he said in his victory speech to a euphoric sea of red-clad supporters in Sao Paulo.

The ex-metalworker, making his return from controversial, since-quashed corruption charges that sent him to prison for 18 months, vowed to work for ‘peace and unity’ in the divided nation.

Easier said than done, according to political analysts.

‘It was a very narrow victory (that left) half the population unhappy,’ said political scientist Leandro Consentino of Insper university in Sao Paulo.

‘Lula will have to show a lot of political skill to pacify the country.’