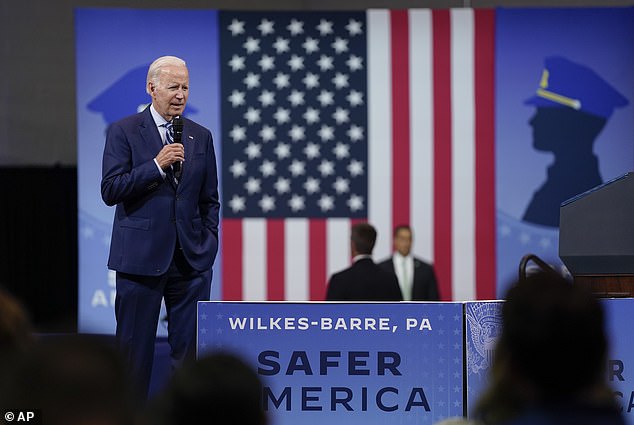 President Joe Biden on Tuesday called for a return to community policing while recalling trips he and his late son Beau Biden made to rough Wilmington neighborhoods in years past, adding that was the place to see the ‘best basketball.’

Biden said and his son, who served as attorney general of the state, used to press police officers to give out their cell phones and engage directly with the communities they were charged with protecting.

He brought up a now demolished housing project known as ‘the bucket.’

‘And what he used to do is go down to the East side, called the Bucket, highest crime rate in the country. There’s a place where I was the only white guy that worked as a lifeguard down in that area, the East side,’ he said.

President Joe Biden during a speech in Pennsylvania recalled visiting troubled neighborhoods in East Wilmington. He called for a return to community policing

He’d go down and hang out and sit on a bench with my my grandson, who’s now 17 years old. And police used to be in the car – local, city police. And he’d go up and bang in a window and say: “Get out of the car dammit meet these people. Let them see you. Let them know you. Let them know who you are,”‘ as Biden told it.

Then Biden brought up the 1992 crime bill he helped author, on a day when Biden and his White House team stressed more investment in police – in a direct contrast with the ‘defund the police’ movement. The law’s stricter sentences have drawn criticism in recent years amid complaints about mass incarceration rates. It also contained funds for communities to hire police officers.

‘Remember what happened to community policing? We went from having enough cops on the street to cities doing well and they deciding they don’t need more police officers. So they reduced the police forces. So you didn’t have two cops in every vehicle. You had one cop in every vehicle. And I don’t blame one cop for not getting out in some certain neighborhoods, not getting out of the car,’ he said.

Biden makes a stop at The Warehouse, a community center for teens in East Wilmington, on November 03, 2020 – Election Day – in Wilmington, Delaware

He said his son would ‘ensure that every single cop gave his cell phone number to the local liquor store owner, the local church, the local grocery store, the local hamburger joint. So if there’s a problem and pick up the phone and call,’ he said.

Biden then told a story of his own visit on the East side where he told of a woman, now deceased, who complained about gang violence in her vicinity. ‘I got a phone number for the local cops.’

‘She’d call, they promised not to identify her because they knew there’d be retribution. And the crime rate began to drop – for real, not a joke,’ she said.

Biden previously mentioned his stint as a 19-year-old lifeguard during the campaign. People who got to know Biden at the pool recalled that he was one of a handful of white lifeguards working at the pool where swimmers were predominantly black.