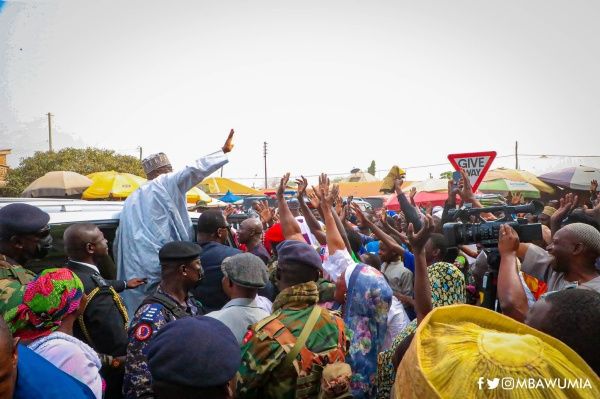 The Vice President had undertaken, at personal cost, to complete the refurbishment of the historic mosque due to its state after over 50 years of existence.

Bawumia handed over the completed project to the leadership of the mosque including the Regional Chief Imam, Shaykh Abdul Salam.

The Vice President took to social media to outline his visit to Tamale on Friday.

“This morning, I was at Tamale Central Mosque to participate in a Qur’anic recitation and prayers, led by the venerable Shaykh Babadua. The prayers were to give thanks for the successful completion of refurbishment works on the Tamale Central Mosque, which I undertook.

“Later in the afternoon, I joined the Muslim Community for Jummah prayers, led by the Regional Chief Imam Shaykh Abdul Salam. I thank the Almighty Allah for giving me the strength to undertake the refurbishment of the mosque, as well as to all those who initiated and contributed to the process, especially, the leadership of the mosque. May Allah bless us all.” Dr Bawumia said.

During the ceremony, the leadership of the mosque expressed gratitude to the Veep over his selfless act whilst the gathered masses hailed him as a hero.

In May 2020, the Regional Chief Imam and Alhaji Opha appealed to the Vice President to help pay for the cost of prior work done on the ground floor of the mosque by a Kumasi contractor.

The Vice President after a jummah (Friday) prayer in November 2020 at the Mosque paid the cost and announced his decision to complete the remainder of the works on the over 50 years old Mosque.

The Veep funded the refurbishment of the second and third floors, the minarets, the penthouse, lighting, painting, and other works.