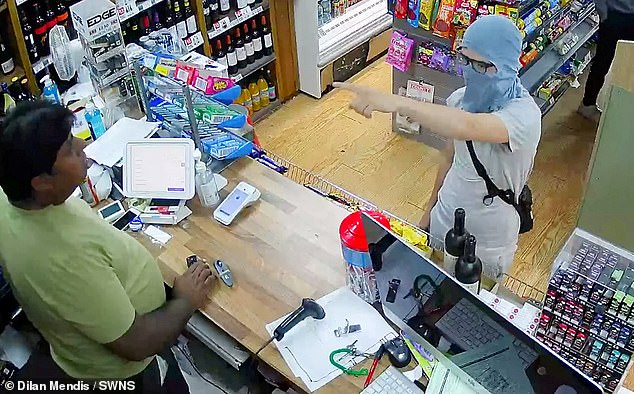 
Robbers mess with the wrong shopkeeper! Moment thieves are chased out of shop by ex-police constable armed with a bottle of vodka

By Brittany Chain For Mailonline

Dramatic CCTV caught the moment a would-be robber messed with the wrong shopkeeper -who turned out to be a former special police constable who chased him off with a bottle of vodka.

Dilan Mendis, who spent 12 years serving with the Metropolitan Police, was behind the counter when two masked men entered his shop at 5pm last Friday.

One of the yobs approached the till and demanded Mr Mendis filled a rucksack with disposable e-cigarettes at Bath Wines, in Worcester.

The shop owner can be heard pleading, ‘come on brother I work hard for my money’ before reaching for his phone to start calling police.

The would-be thief then shouts ‘put the phone down man’ and tries to get behind the counter at which point Mr Mendis grabs a bottle of vodka from the shelf.

But the father-of-three sent the two men fleeing from his shop empty-handed by chasing them out of the door.

A bumbling attempted robber has been embarrassed by an ex-cop who owns the store he was trying to steal disposable e-cigarettes from. Pictured: CCTV of the incident

‘He said he couldn’t do that, then he asked for all of the disposable vapes, so I tried to look around everywhere to buy time [to call the police],’ Mr Mendis said.

Mr Mendis attempted to covertly call police and used the panic button, but the attempted robber shouted at him to ‘put down the phone’ and stormed behind the counter.

The would-be thief shouts ‘put the phone down man’ and tries to get behind the counter at which point Mr Mendis grabs a bottle of vodka from the shelf.

The father-of-three then sent the two men fleeing from his shop empty-handed by chasing them out of the door.

‘I was not too scared as I have dealt with these kinds of incident whilst working for the Met Police,’ he said, adding the thugs were likely not expecting him to put up a fight when they targeted his business.

Mr Mendis runs the store with his wife Suzanne and three children, Nicholas, Rian and Tianna.

Mr Mendis was heard on the CCTV pleading with the masked man, saying: ‘Come on brother, I work hard for my money.’

Father-of-three Mr Mendis launched himself away from the man while throwing a chair in between them as he grabbed a bottle of vodka, which he used to chase the two men out of his store

He later shared the CCTV online in an attempt to identify the culprits.

‘These boys tried to rob bath wines, asking for disposable vapes but didn’t succeed,’ he said.

‘We have informed the police. If you know these boys please let us know so I can inform the police.’

One of the men wore a blue mask and glasses while the second man – who lingered toward the back of the store during the altercation – wore a dark jumper and trousers.

The crooks have been ridiculed online for their lousy attempt.

‘Talk about picking on the wrong guy, lol. Hope they get caught soon,’ one person  said.

Another added: ‘And the award for the worst attempted robbery of all time goes to the milky bar kid.’

The incident has been reported to West Mercia Police.

The incident has been reported to West Mercia Police

Share. Facebook Twitter Pinterest LinkedIn Tumblr Email
Previous ArticleBiden launches round two against Trump in bid to save Democrats in November
Next Article “Be intentional whom you make a mother to your kids” – Outrage as lady smokes and shares Weed with a toddler