Australia weather: NSW and Queensland to be lashed with heavy rain and storms with floods possible 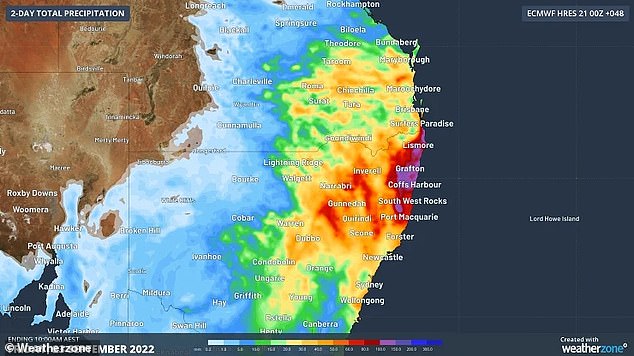 A massive storm stretching across Australia’s east coast is set to wreak havoc on millions with flood-ravaged towns bracing for another disastrous weather event.

Several flood warnings have been issued across New South Wales with south-east Queensland also in the firing line.

The Bureau of Meteorology has warned heavy rainfall and storms will continue to lash the NSW coast from the Hunter region up to the Northern Rivers over Thursday night and into Friday.

The miserable conditions will ruin the plans of many families wanting to get away for the school holidays which begin this weekend in NSW.

Residents of Lismore, who have been devastated by two flooding events this year are being told to brace for more wet weather, with a minor to moderate flood warning issued for the town’s Wilsons River.

‘Depending on the location and intensity of the rainfall, peaks above moderate could be possible from Friday and into the weekend,’ the BoM warned.

Between 80 to 120mm of rain is expected to fall across parts of the Mid North Coast over a 24-hour period, while severe weather warnings have been issued for the Northern Rivers.

Isolated falls of up to 200mm of rain are also on the forecast.

Within the past 24 hours 100mm of rain has already lashed areas from Grafton to Coffs Harbour, while parts of the Mid North Coast have seen 180mm.

SES Commissioner Carlene York said there’s already been 49 rescues in this flood event, and more than 500 calls for help.

A moderate flood warning has also been issued for the Nambucca River at Bowraville on NSW’s Mid North Coast.

Floods have already hit Wee Waa, a town in the state’s northwest, with helicopters dropping off supplies.

NSW Emergency Services Minister Steph Cooke warned on Thursday it was the start of a ‘very long season’ for flood conditions.

‘We’re facing challenges on multiple fronts with prolonged flooding through the west and northwest of NSW, renewed river rises in the Central West and southern parts of NSW,’ she said.

‘Now communities in the Northern Rivers, Mid North Coast and North Coast who have been made flood weary over the past several months are facing an uncertain couple of days with weather conditions worsening.’

Parts of NSW have already seen more than 50mm of rain fall since 9am on Thursday.

Ms Cook said she was confident emergency services were equipped to deal with the floods.

BOM Meteorologist Jane Golding said flash flooding is possible for areas between the Central Coast and the Queensland border.

‘We’re expecting areas to see 24-hour totals of above 100mm but we’re going to see some bullseyes in there that are higher than that, and those bullseyes are where we will see flash flooding,’ Golding said.

‘That’s enough rain to cause the rivers to start rising, road ponding, and dangerous driving conditions. The ground is so saturated across all of NSW with the gusty winds around at the moment we can expect trees down as well.’

Up to 80 flights were cancelled at Sydney Airport on Thursday due to the disastrous weather.

The airport has blamed torrential rain and strong winds for 45 flights being cancelled from Sydney between 6am and 7.30pm.

Up to 41 flights into Sydney have also been axed in bad news for travellers who planned to take advantage of Thursday’s National Day of Mourning.

Services were scheduled to return to normal by Thursday afternoon.