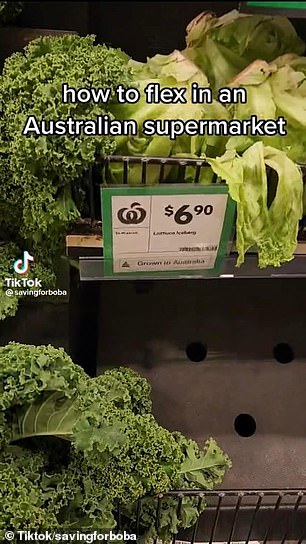 
A farmer has lashed out at major Australian supermarkets for ‘jacking up’ the prices of some fruit and vegetables while buying them for a fraction of the cost in a move he says is ‘ripping off’ shoppers.

Guy Gaeta, a cherry and apple farmer from Orange, in central NSW and NSW Farmers Horticulture Committee chairperson, is at his wits end with the huge prices seen on the shelves for produce which he claims aren’t flowing back to the farmers.

He said he heads down to the supermarket every week to see how much shoppers are having to fork out and is shocked at the hefty increases.

Mr Gaeta said farmers would sell a head of lettuce for about $2 to retailers, but recently the vegetable has been seen on supermarket shelves with a price tag of up to $12.

‘It is rotten for the farmers, but even worse for the consumers,’ he said.

Cherries might be sold for $5 a kilo but once they hit the shelves the price hikes up to about $15, Mr Gaeta said adding the price of cucumbers has also increased three-fold.

Another farmer said he sells his apples for $2 a kilo only for them to then cost $10.99 in stores.

‘If farmers were getting $10 for a lettuce, we’d be driving Ferraris,’ Mr Gaeta told 2GB.

Two Woolworths shoppers shared a TikTok video titled ‘How to flex in an Australian supermarket’ and placed a whole head of lettuce in a plastic bag. Stuck on the bag was a sign reading ‘Lettuce Vuitton’ as the price of iceberg lettuce has skyrocketed

‘Farmers are not getting nowhere near that price (seen in supermarkets), they’re getting manipulated … it’s pretty ruthless.

‘Nobody’s doing anything about it … with the cost of living and inflation, when is it going to end?’ he said.

Mr Gaeta denied the skyrocketing cost of petrol was to blame, saying farmers delivered the produce themselves to supermarket distribution centres.

‘Farmers deliver the produce to the supermarket’s distribution centre, so the only cost they’ve got is to distribute around the state.

‘We wear most of the cost. Yes they’ve got costs too, but we (the farmers) are not putting 80 per cent on top of the price we agree on.

‘We’re talking about essential food, we all know we all need fruit and vegetables, it’s very important to our wellbeing.

The farmer said he now refuses to supply to the large supermarkets, but many in his industry didn’t have that option.

‘If we don’t say no to them, we probably have to throw the produce away,’ Mr Gaeta said.

‘Unless we say enough is enough the consumer is just going to pay more and more and when you pay more, you don’t buy as much and with that you’ve got to drop your price.

‘It’s one situation after another.’

National Farmers’ Federation economist Ash Salardini said there were many factors including food and staff shortages and the increase in the cost of freight were contributing to the soaring price of produce.

Coles and Woolworths have denied allegations they are price gouging.

A spokesperson for Woolworths told Daily Mail Australia: ‘We pay the market price for fresh fruit and vegetables, which is affected by factors including weather, seasonality, supply and demand.

‘There are a number of fruit and veg categories in reduced supply following the east coast floods and recent rain and cold temperatures, and as a result we’re paying more to our suppliers. These include lettuce and other leafy greens, zucchini, capsicum, green beans and strawberries.

‘Many other categories like apples, pears, citrus and avocados have not been impacted by the same challenges and continue to be in good supply. We’re passing on the great value from these seasonal fruits to our customers in store.

‘We operate in a highly competitive market and we’re always working to strike the right balance so suppliers receive a fair market price and our customers have access to high quality and affordable fresh produce.’

Coles on Tuesday announced those in southeast Queensland would be able to buy two smaller lettuces for $6.50 as demand for the vegetable suffers amid recent floods.

A spokesperson for the supermarket said weather conditions had impacted the supply of produce.

‘Following the devastating floods in Northern NSW and Queensland earlier this year, the ongoing heavy rainfall along with recent cold weather and lower levels of sunlight have impacted the supply of berries, lettuce, beans, tomatoes, broccoli and herbs,’ a spokesperson said.

‘Produce pricing is subject to supply but as soon as volumes recover, we will be working hard to get prices down for our customers as quickly as we can.

‘Despite this, our customers can expect to see improved stocks of many fresh produce lines in coming weeks thanks to the extraordinary efforts of our growers.’

It comes as Reserve Bank governor Philip Lowe warned inflation could hit a whopping 7 per cent at the end of the year.

The RBA boss said inflation was expected to peak at 6 per cent this year, but that number has grown even higher.

Speaking to the American Chamber of Commerce in Australia on Tuesday, Mr Lowe said they were bracing for the 7 per cent peak to hit in December, adding it would be a ‘couple of years’ before inflation returned to normal levels.

Cherries have also been a part of the price hike, with some supermarkets charging up to three times more than what the farmers sell them (pictured, tubs of cherries from the Cherry Hill Orchards in Victoria)