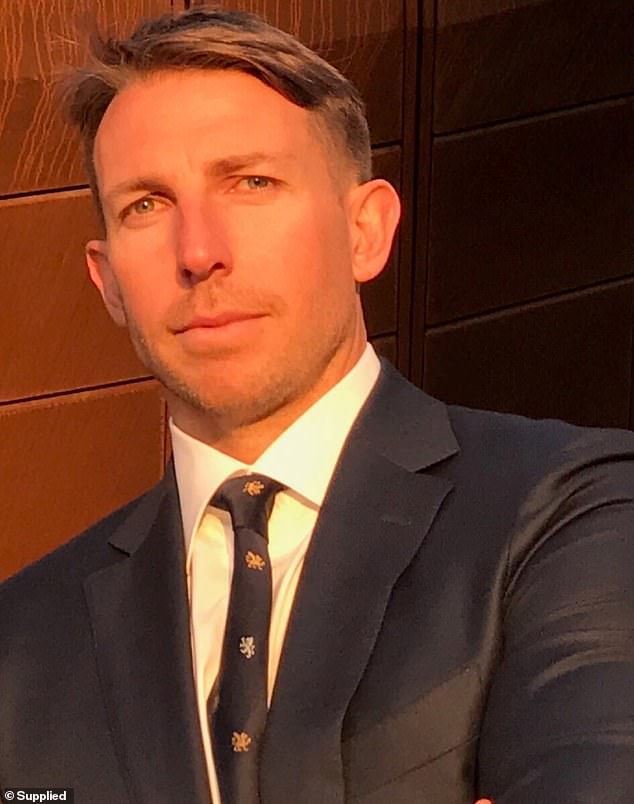 
The founder of Australian-based global fitness empire F45, who recently stepped down from the company after its share price plummeted more than 60 per cent has dropped from sight, cancelling social media and social appearances.

And even Adam Gilchrist’s onetime closes business partner – his F45 co-founder Rob Deutsch – doesn’t know where he is.

Mr Gilchrist walked away from F45 earlier this month with a $10 million golden handshake amid the near collapse of cult-like celebrity gym.

He has since sold his $14m oceanfront mansion in Sydney‘s  Northern Beaches, bought in 2019 under his wife’s maiden name, Eli Havas, and both Mr Gilchrist and Ms Havas have deleted their social media accounts.

Rob Deutsch, who co-founded the F45 franchise in 2014 with Adam Gilchrist told Daily Mail Australia he hadn’t spoken with him ‘in two to three years’.

‘I am told he … changed numbers etcetera, so might be tough to get a hold of nowadays,’ Mr Deutsch said.

Mr Gilchrist’s withdrawal comes as F45’s financial woes are linked to a possible cash drain in the US by the recruitment of celebrities and sports stars for multi million dollar endorsements.

Mr Gilchrist’s payout is said to top $10.1 million, and to include 12 months’ rent on his Florida mansion and 18 months of health insurance for his family, despite the company’s share price crash.

There is no suggestion that Mr Gilchrist has anything to hide in connection with F45.

Adam Gilchrist, 44, has dropped off social media since walking away from F45 with a $10m golden handshake and according to his co-founder is hard to find

Celebrity ambassadors like supermodel Cindy Crawford (left) and soccer star David Beckham (right) were paid in millions of cash or shares to turbocharge the branch, but may have drained the company of financial underpinning

Mr Deutsch ‘transitioned out’ of the company two-and-a-half years ago with a $US2.5million ‘transaction bonus’ after amassing a formidable property empire worth more than $20m, including a beachfront family home in Bronte which sold last year for $17.7m.

The two men, who are old rugby mates, teamed up to create F45 out of Rollex gym in Sydney’s White City Mr Deutsch had set up in 2012 with a $100,000 redundancy cheque from his former life as an equities sales trader.

The pair rebranded Rollex as F45 and established the gyms’ franchise model which set what would become a fitness business juggernaut on its upward trajectory.

As exclusively revealed by Daily Mail Australia, Adam Gilchrist (not to be confused with the cricketer of the same name) was officially bankrupt when he launched the cult gym.

He hobnobbed with celebrities and netted $500 million overnight when actor Mark Wahlberg invested $450m in F45 and it was floated on the New York stock exchange in July last year in a $US1.6 billion stock market debut which saw the share price soared to $17.28.

Gilchrist (above, right, with F45 investor movie star Mark Wahlberg in 2021 at the New York Stock Exchange) took a $10m golden handshake from the company then cancelled his social media accounts and dropped from sight according to co-founder Rob Deutsch

At the time F45 said that sealing F45’s success in the US would be the recruitment of celebrities as brand ambassadors, noting in its prospectus that ‘influencer marketing is a key method through which we embed F45 Training in popular culture’

‘Our partnership with actor and entrepreneur Mark Wahlberg has accelerated our path to becoming a household name in the US market,’ the prospectus read.

‘Further, we have benefited from organic and paid social media promotion of the F45 Training brand by celebrities and professional athletes that visit our studios.’

Mark Wahlberg recruited David Beckham in 2021 as a global ambassador for $US5m, with a similar amount ($7.2 million) in a cash payment due to the soccer star in July this year, on the first anniversary of the share float.

David Beckham was paid $US5m on becoming a  brand ambassador for F45, one of several deals the company believed would fire up its global expansion plans

But these celebrity deals wagered to ‘turbocharge its now-abandoned global expansion plans’ may have been cash-draining exercises which led to the July 26 market update stating F45 had ‘lost the financing underpinning its franchise sales’, Nine newspapers reported.

Now, instead of expansion, F45 plans to slash staff and downgrade earnings and revenue forecasts for the financial year 2022-2023.

Staff have already been cut in Australia, with up to 110 corporate employees losing their jobs after the stock crash and further cutbacks mooted.

When he resigned as chairman and CEO of F45 Training following the market bloodbath on the New York Stock Exchange, Mr Gilchrist’s $10m payout cost the company more than half of its funds at the time.

The ‘world’s fastest-growing fitness business’, which was worth more than half a billion dollars at its height, had less than $20m cash according to its last filing.

Mr Gilchrist’s three-storey glass and concrete beachfront home in Freshwater, which was listed for sale by auction after the share plunge, was quickly snapped up on August 13 for more than $14 million.

Mr Gilchrist was made bankrupt in April 2011, and at the time lived in a comparatively shabby Sydney Eastern Suburbs unit, albeit with Elizabeth Bay views, with a tiny kitchen and one bathroom.

Mr Gilchrist was still declared bankrupt and under a three-year mandatory ban from directing a company when F45 was registered as an Australian Business in March 2013.

There is no suggestion Mr Gilchrist acted contrary to the terms of his bankruptcy by founding the business.

Mr Gilchrist would not act as an F45 director until six years later but by then F45 was a booming fitness craze with gyms opening across the country attracting Australian athletes and celebrities including rugby league players Nate Myles, Jarryd Hayne and Willie Tonga and model, Nicole Trunfio.

Mr Gilchrist used the money he made from F45 to amass a property portfolio across Australia, including an apartment block in Lennox Head and a beach pad in Byron Bay.

The company’s cult following was based on its 45-minute group training workouts that combined resistance, metabolic and cardio movements in a fun and accessible environment.

Mr Gilchrist stepped into the role of F45 director in March, 2020, as Rob Deutsch was leaving the company.

Mr Deutsch and Luke Istomin – best known as Hugh Jackman’s personal trainer – had acted as directors from 2013, with Mr Istomin stepping down in 2015.

Mr Gilchrist sold his Freshwater beach house (pictured) for $14m  in mid-August, just days after F45 suffered a stock market bloodbath and he walked away with a $10m payout

Mr Gilchrist was a director for little more than two years before he resigned from the company earlier this month.

As outgoing chairman, he said he was ‘forever grateful’ to the franchise and thanked staff, investors and members for their support.

‘To the staff that have worked tirelessly since our inception, you have been incredible in your efforts, and I thank you for all of your support,’ Mr Gilchrist said in a statement.

‘To the investors that have joined us along our journey, I thank you for your commitment to F45.

‘Lastly, I am forever grateful to our franchisees who deliver the world’s best workout each day to F45 members around the world.’

Even before the latest plunge, F45 stock had fallen sharply since it went public with an initial offer of $22.89 per share, bottomed out at $US1.35 and at the time of writing was sitting on $2.31 a share.

F45 confirmed it would lay-off almost 45 per cent of the company’s corporate staff to reduce its selling, general and administrative expenses.

The company said the change in ‘macroeconomics – national output, unemployment rates and inflation – has forced a restructuring of the company’.

‘We are taking the necessary steps to right-size our business in light of shifting macroeconomic and business conditions,’ Chief Financial Officer Chris Payne said in late July.

‘While we expect growth to continue, market dynamics are having a greater than expected impact on the ability of franchisees to obtain capital to develop new F45 locations.

‘In addition, recent share price performance has made it challenging for franchisees to utilize financing facilities announced earlier this year.’

Mr Deutsch said he was devastated to hear what had happened since he left F45.

‘Never in my wildest dreams could I have imagined this,’ Mr Deutsch wrote on Instagram.

‘When I exited, and sold out of F45, I left a healthy, phenomenal, beast of a business, all the way from the company culture to the heart beat of the business … the workouts.

‘F45 was special. I genuinely hope all of the 110 laid-off staff, find happiness and opportunities elsewhere.’

Lori Vallow’s trial has been suspended indefinitely, an Idaho judge ruled on Thursday, pending a…