Female soldiers filmed on tape twerking in their uniform (video) 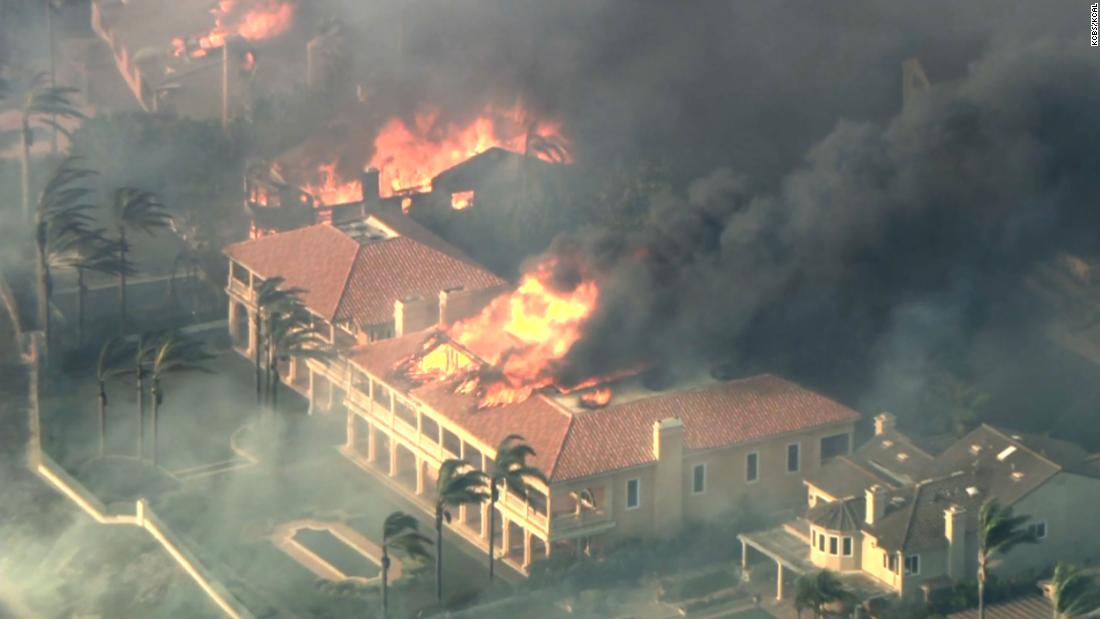 Authorities issued several evacuation orders in response to the flames, which grew to about 200 acres by Wednesday evening after the fire was first reported in the afternoon.

Images from CNN affliate KABC showed firefighters responding to the flames at multiple houses scattered across the neighborhood, specifically in the Aliso Woods Canyon area.
In one neighborhood, footage from CNN affiliate KCBS/KCAL showed flames overtaking entire homes and burning through to their interiors while firefighters hosed down nearby houses on the same street hoping to save them.

Firefighting crews were using water from a pond at the El Niguel Country Club in Laguna Niguel to help fight the fire.

Crews will be conducting damage assessments overnight and monitoring for hotspots or flying embers that could spark more damaging flames, Fennessy said.

The flames were fueled by gusty winds that reached up to 30 mph in the area, according to nearby observations from the National Weather Service. That is in addition to dry conditions from an ongoing severe drought in the entire region, according to the latest US Drought Monitor.

Those dry conditions combined with the coastal winds, which aren’t unusual in the region this time of year, are making the situation worse, Fennessy said.

“The fuel beds in this county, throughout Southern California, throughout the West, are so dry that a fire like this is going to be more commonplace,” he said.

Evacuation orders are in effect for Coronado Pointe Drive, Vista Court and Via Las Rosa in the Pacific Island area of Laguna Niguel, and a reception area for those who evacuated was set up at the Crown Valley Community Center, the Orange County Sheriff’s Department said in a news release.

Laguna Niguel resident Allan Aguilera told CNN he and his family decided to evacuate when they saw the scope of the flames from a lookout point in the neighborhood.

“When we reached the top we saw the full scale of how big the fire was and witness how quickly it was spreading,” he said. “There were tons of people in the area doing the same, watching the fire before the winds changed and began pushing the flames closer and closer. At that point we decided to leave and go prepare for potential evacuation.”

“The situation was incredibly tense but we kept our cool, gathered our most valuable belongings … and made an early evacuation to avoid any potential bottle necking if the worst case scenario were to play out,” Niguel added.

“I walked down to the shopping center below and the smoke grew maybe two to three times what it was before,” she said.

Video recorded by McCoy shows smoke billowing from behind the hills, where Laguna Niguel is located. Other videos from nearby areas also show thick gray and brown smoke clouds near the residential areas.

The fire expanded to 200 acres in just hours despite a strong response from fire officials.

“We have over 60 different types of resources battling the flames,” the Orange County Fire Authority said.

Despite the effort, the fire still “ran” on first responders, officials said, primarily driven by the effects of climate change on the region in recent years.

“We’re seeing spread in ways that we haven’t before. Five years ago, ten years ago, a fire like that might have grown to an acre, couple acres” before it was under control, Fennessy said. But now, “fire is spreading in this very dry vegetation and taking off.

California and the overall Western region are experiencing devastating drought conditions that have led to water restrictions in parts of the state.

Last summer, California endured its most severe drought in its 126-year record. And the upcoming months aren’t getting any better.
Forecasters with the National Oceanic and Atmospheric Administration are expecting “prolonged, persistent drought in the West where below-average precipitation is most likely,” the agency wrote in its spring outlook in March.
Late last month, Southern California officials asked businesses and residents in parts of Los Angeles, Ventura and San Bernardino counties to reduce outdoor watering to one day a week.

CNN’s Sharif Paget and Brandon Miller contributed to this report.

Veteran Ghanaian producer, Kaywa is not okay with a statement made by a Nigerian sound…

Female soldiers filmed on tape twerking in their uniform (video)