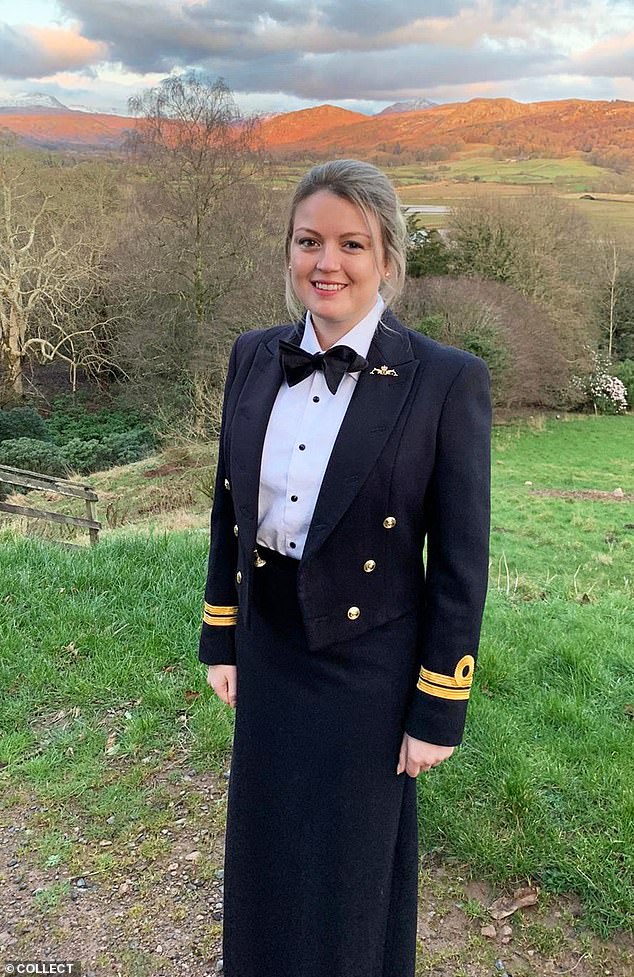 
The armed forces is bringing in new rules today aimed at cracking down on sexual harrassment, which would see anyone found to have acted inappropriately immediately discharged.

The new ‘zero tolerance’ regulations, which will be rolled out across the army, navy and RAF, include a clampdown on cat-calling and touching, as well as ‘lewd’ comments, ‘winking’ and ‘leering’.

It comes after it emerged last night that two Red Arrows team members had been sacked from the RAF and more disciplined as part of an official investigation into sexual misconduct and bullying.

More allegations have also been made in the navy, with whistleblower Sophie Brook revealing to the Mail the horrific abuse she says she received while serving as a lieutenant in the submarine service.

And it has emerged today that a naval commander has been arrested for sexually assaulting a young sailor – just hours before he was due to attend training on the consequences of misconduct in the Royal Navy.

The new rules will be implemented from today following a four-month period in which a training programme, involving in-depth briefs and exams, was rolled out to all service personnel.

A source told MailOnline that all servicemen and women were expected to score 100 per cent on a test after receiving a brief on the new rules.

In a move aimed at stamping out abuses of power, the new rules also state that any instructor found to have engaged in a sexual relationship with a trainee will face mandatory discharge.

Further policies came in over the summer, including a blanket ban on paying for sex when on deployment abroad.

The regulations, first published in March, read: ‘Zero tolerance means that every allegation of unacceptable sexual behaviour will be acted upon through prompt, thorough, independent and efficient investigation.

‘There is a presumption that anyone in the Armed Forces who is found to have behaved in a sexually unacceptable way, will be discharged.’

Flight Lieutenant Will Cambridge, a former Tornado and Typhoon pilot, allegedly propositioned female personnel and was said to have had a physical relationship with a colleague

In July, the Ministry of Defence promised the new regulations would give victims and survivors ‘confidence’ in raising complaints without impacting their careers.

But since they were announced, a number of high-ranking female personnel have come forward to publicly make allegations regarding sexually discriminatory treatment they faced during their careers.

Sophie Brook, a trailblazing submariner who was set to become the first female commander in the service, said a senior officer put his genitals in her pocket while others said she was ‘number six’ on a list of who they would rape.

The new rules aim to stamp out personnel ‘rating’ people based on their appearance in a sexual way and displaying sexual imagery, something Ms Brook also alleges submariners did on a daily basis.

In a separate case, it emerged today that a high-ranking submariner is accused of attacking a junior rate after allegedly imprisoning him following a night of drinking at a naval base this month, and has been arrested.

Whistleblower Sophie Brook (pictured with her dog Alisa), a former lieutenant who lifted the lid on allegations of serious sexual assault in the secretive submarine fleet, said more action was needed

‘The head of the Royal Navy has made some very strong statements in the last few weeks regarding the behaviour of its servicepeople and yet just days later there is another case,’ she said.

‘There needs to be more action and less hollow statements.’

The RAF’s Red Arrows display team has also been engulfed in a sexual misconduct scandal as allegations of ‘unacceptable behaviour’, mainly towards young female recruits, were investigated.

More than 40 crew members, including vulnerable women, told commanders they suffered sexual assaults, sexual harassment and physical attacks by Red Arrows pilots who considered themselves ‘untouchable’ due to their status.

Without fear or favour, regardless of rank or status, I will remove this abhorrent behaviour from anywhere within the Royal Navy.” pic.twitter.com/vjniRx1tUW

A Ministry of Defence spokesperson said: ‘We are committed to listening to and improving the experiences for all members of the Armed Forces and we do not tolerate abuse, bullying​, harassment or discrimination of any kind.

‘Our new zero tolerance policies, introduced this summer, ensure that anyone convicted of a sexual offence will be dismissed from service, and we continue to tackle unacceptable behaviour through cultural change and improved reporting mechanisms so personnel feel safe to raise issues and confident allegations will be acted on.

‘As part of our commitment to tackling unacceptable behaviour across Defence we have implemented a zero tolerance approach. Three policies came into effect in the summer which aim to tackle sexual exploitation and abuse, specific unacceptable behaviours and the use of transactional sex workers abroad.’

A Red Arrows spokesman said: ‘These investigations have resulted in a range of outcomes including dismissals from the RAF.

‘The inquiry also recommended a variety of measures to improve behaviours, including extensive training on what is and what is not acceptable.’

They added: ‘The RAF commends the actions of those who came forward with evidence. It is important for unacceptable behaviour to be called out.

We take all allegations extremely seriously and will take decisive action against anyone who fails to uphold our high standards.’

And last night, the head of the Navy, First Sea Lord Admiral Ben Key, took the unusual step of releasing a video on Twitter.

He said: ‘I am sure I am not alone across the service in hearing the stories in recent weeks of utterly abhorrent behaviour affecting people who we have served alongside and how their lives have been impacted by the conduct which is just not acceptable.

‘Hearing some of the testimonies and reading how lives have been affected has saddened me enormously… I and the senior leaders of the service are determined to root it out and remove it from everywhere and anywhere within the Royal Navy.’

He reiterated that investigations are ongoing and that swift action would be taken against culprits regardless of rank.

Share. Facebook Twitter Pinterest LinkedIn Tumblr Email
Previous ArticleTheir IVF journeys did not end with children. Here’s what they want you to know
Next Article “We can not date you if you do not owe a car or house” – Young women list their requirements.