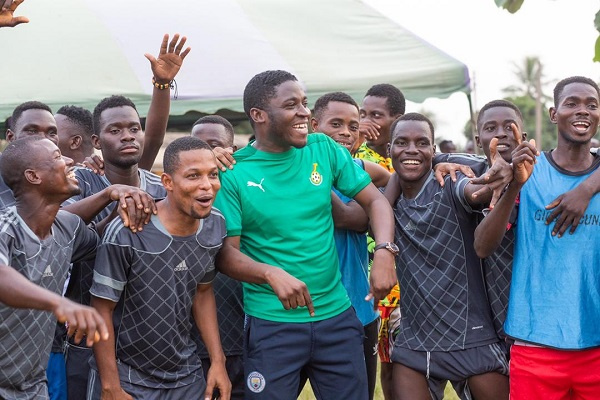 Deputy National Youth Organizer of the NDC, Edem Agbana with some footballers

Twelve talented young footballers were selected by scouts at the 3rd edition of the annual DonKing Memorial Gala which was held on Monday, 3rd December 2022 at Xipe in the Ketu North Municipality.

The annual gala, which has been in existence for over two decades was named after Cephas Donking Agbana, after his demise in 2017. The gala which seeks to bring communities in the Ketu North Municipality together saw an excellent display of football and sportsmanship from the young lads from all 10 communities that were represented by their various teams.

Former Managing Director of the Accra Hearts of Oak, Neil Armstrong Mortagbe and a team of scouts remarked at the end of the gala that 12 players had been penciled for further studies in an international justify competition.

The gala was sponsored by Edem Agbana, the Deputy National Youth Organizer of the NDC, and son of Cephas Kwame Donking. It has since served as a breeding ground for young talents and skilled footballers.

The one-day event, amongst other notable dignitaries, was graced by Chiefs from the various communities and the Member of Parliament of the constituency, James Klutse Avedzi.