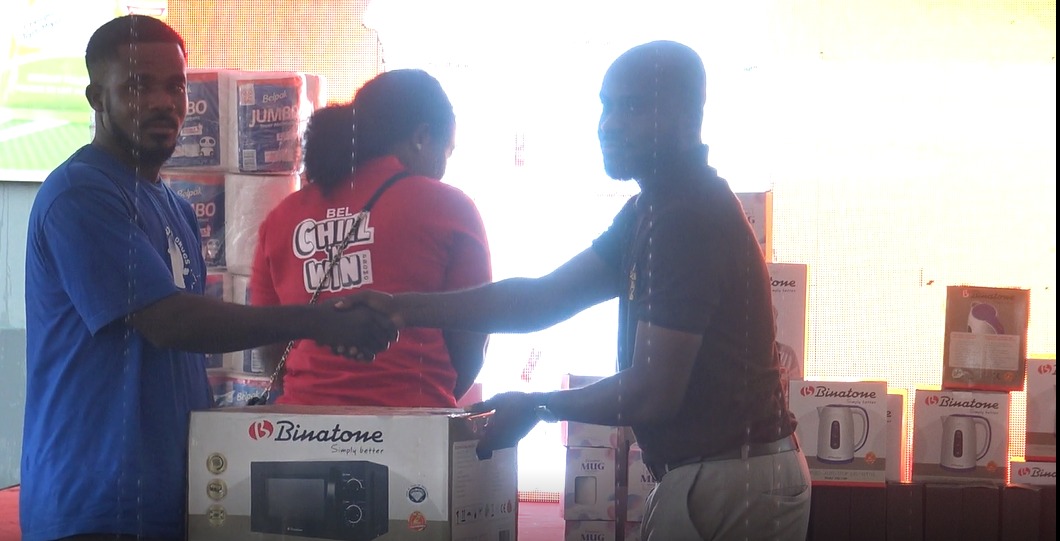 
Blow Chem Industries Limited, producers of Bel Mineral Water and beverages, has awarded over 11,000 people nationwide for their participation in the Bel Chill N Win promotion.

The promotion, which began in April this year, seeks to award consumers of the company for their continuous patronage and support of the Bel brand.

In other to qualify as a winner, participants were required to drop an envelope filled with twenty or more wrappers of Bel drinks at any Bel distribution centre around them and stand a chance of winning the grand prize of a KIA Picanto and other amazing prizes.

The winners, who were randomly chosen with the help of a technological ballot, were awarded various prices ranging from cooking wares, irons, toasters, blenders and other prices.

The Sales and Marketing Manager of the Accra branch of the Blow Chem Industries Limited, Ebenezer Nortey, speaking to Citi News, indicated that the promotion was introduced as a way of giving back to society.

“The purpose of this competition is to award our loyal consumers. Bel beverages have been in existence for the past five years, and we could see a lot of people enjoying our beverages and energy drinks so looking at what can we do for our loyal customers, the people that are patronizing and consuming our products, we have to do something, although we cannot do all, at least we can do something so that the little children, school children and the parents who are buying the drinks can appreciate what we are doing,” he said.

He further stressed that the grand prize, which is a KIA Picanto vehicle, will be awarded to one lucky winner, with other winners going away with prizes such as air conditioners, furniture and other prizes in the next draw awarding ceremony.

Also addressing the media on the sideline of the program held in Accra to award the winners, the Marketing Manager of the National Lottery Authority, Bernard Boamah indicated that the NLA was there to ensure fairness in the affairs of the program.

“In this era of fraudsters and scammers, as a regulator, corporate Ghana comes to seek permission to run this consumer promo so what we do is that we protect the interests of the citizens and their clients to ensure that there is fairness in the selection of winners that partake in the consumer promos that are run,” he said.

Some winners who spoke to Citi News expressed their gratitude to Blow Chem Industries Limited for their good work.

“I felt excited about winning a T-Shirt and cap even though I did not win the big prize I expected, but this has motivated me to continue participating because this is not the end. So I will keep participating for the grand draw,” one participant said.

“I give thanks to the almighty God for everything because it is not everyone who participates in a promotion and wins, so I am very grateful to God for winning fourteen prizes at this single event. I am also grateful to Bel Beverages for this program,” another participant said.