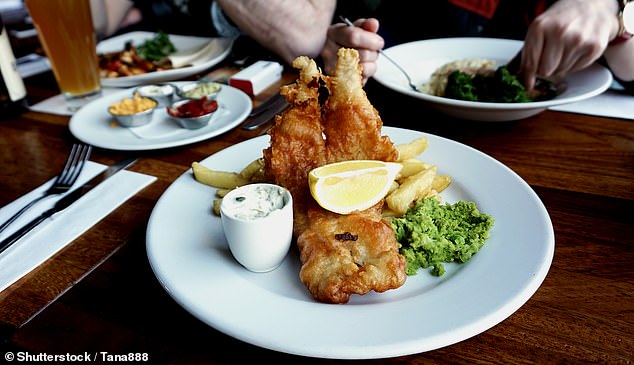 
Younger Britons are less likely to pick fish and chips as their favourite takeaway, with just one in 14 under-25s doing so, a poll has revealed.

While the quintessentially-English food is still a staple for pensioners, according to YouGov’s new poll for Times Radio about Britain’s favourite takeaways, it is not so popular with the younger generation.

Youngsters aged 18-24 went for Chinese and pizza as their favourites, with only 7 per cent picking fish and chips.

But, surveying people who were slightly older, fish and chips was more favoured.

And the traditional dish was the clear winner for over-65s, with 36 per cent loving the cuisine the most.

Replaiced: While the quintessentially-English food is still a staple for pensioners, according to a new YouGov poll for Times Radio, it is not so popular with the younger generation, with just one in 14 under-25s choosing it as their favourite takeaway (stock image)

Despite fish and chips remaining a firm choice of the older generation, surges in costs could mean that trips to the chippie could be under threat.

Increases are partly due to the Russian invasion of Ukraine hiking up prices of potatoes and white fish.

Warnings have circulated that half of Britain’s 10,500 fish and chip shops could be forced to close because of the price rises.

A fish and chip supper could rise from £8.50 to £11.50 and hake and other white fish could replace cod and haddock, which are imported from overseas, according to the Sun.

Additionally, some have said that the cost of cod has jumped by up to 50 per cent, according to The Times.

In the survey, Chinese was the overall winner, with 25 per cent of people opting for it as their favourite.

Coming in second was fish and chips, with 19 per cent of those surveyed choosing the English classic.

Afterwards came Indian, a choice which was favoured by 17 per cent of Brits.

Pizza was picked by 13 per cent of people in the survey, with kebabs and Thai both on 4 per cent and burgers and fried chicken on 3 per cent.

Coming in bottom was Japanese, chosen by just 2 per cent of those surveyed, and only 1 per cent plumped for Mexican food.

Of Leave voters, 25 per cent chose fish and chips as their favourite. But only 16 per cent of Remainers went for the British dish.

But Labour supporters and Lib Dems picked the dish as their third favourite.

The survey also revealed that just over a quarter of people, or 27 per cent, said that their diet was unhealthy.

This figure rose to 32 per cent of those in Scotland. And people who had an unhealthy diet cited reasons including enjoying it too much, not being able to afford healthier food and not being able to wean themselves off of calorific treats.

Although fish and chips are still popular for the older generation, trips to the chippie could be under threat due to price hikes partly caused by Russia’s invasion of Ukraine (stock image)