‘You can’t believe how much this hurts’: Walorski’s family pays tribute to Indiana congresswoman 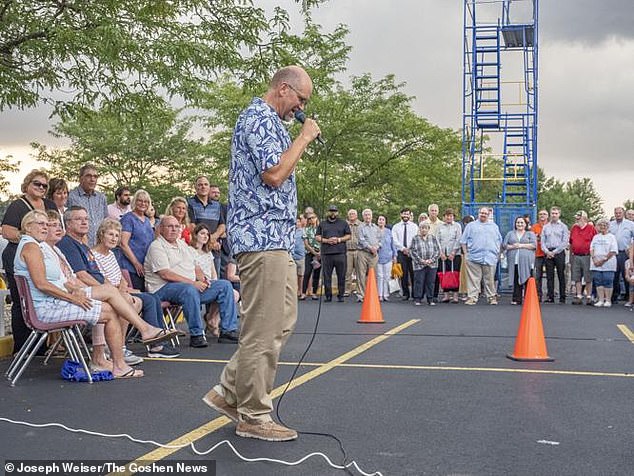 
The husband of Indiana Congresswoman Jackie Walorski has paid tribute to his principled and courageous wife, speaking at a vigil on Thursday – the day after her death in a car crash.

Walorski, 58, died alongside her aides Zachery Potts, 27, of Mishawaka, Indiana, and Emma Thomson, 28, of Washington, D.C.

Their SUV crossed the center line and crashed head-first into an oncoming vehicle driven by Edith Schmucker, 56, of Nappanee, who was also killed.

The accident happened near the northern Indiana town of Nappanee.

Friends and relatives of Walorski and her team gathered in Elkhart, near where she lived, to pay tribute.

Dean Swihart, who was married to Walorski for 27 years, told the crowd at Jimtown High School how proud he was of his wife.

‘Jackie took charge of whatever room she walked into, and it wasn’t because she was six foot tall,’ said Swihart.

Dean Swihart is seen on Thursday night paying tribute to his wife Jackie Walorski, who was killed in a car crash on Wednesday

Walorski and Swihart were married for 27 years, having met in Indiana in 1994

Walorski was born and raised in South Bend, graduating from Riley High School in 1981 and attending Taylor University.

After college, Walorski returned to the area and became a television reporter for WSBT-TV.

She then moved to work at the St. Joseph County Humane Society followed by a job at Ancilla College, which she served in from 1991-1996.

Swihart and Walorski met in 1994: He took her to the St. Joseph County fair on their first date.

‘She knew that on the first date. I’m slow.’

Swihart and Walorski are pictured together. He remained in Indiana, working as a school teacher, as she represented the state in D.C.

Swihart and Walorski were united by their deeply-held Christian beliefs

The pair are pictured at home with their dog

The pair married a year later, and in 2000 moved to Romania for four years, doing missionary work and launching Impact International, to help children and provide medical supplies. On their return to Indiana, Walorski entered politics.

Swihart, a teacher, added: ‘I could not be more proud of the life my wife has lived.

Other told how Walorski had inspired them.

Tim Wesco, who replaced Walorski in the Indiana House of Representatives in 2010 and still holds her former seat, credited Walorski for believing in him when he decided to run for office at 23 years old.

‘I called her and I said: ‘Jackie, I’m thinking of running for your seat,” he told the vigil.

‘And she said: ‘Tim, do it. We need more Christians in government.’

Swihart and Walorski are pictured together in Washington D.C.

Investigators determined that the SUV driven by Zachery Potts, 27, (left) crossed the centerline for unknown reasons in a rural area near the town of Wakarusa. Walorski communications director Emma Thomson (right) was also killed

‘We went in to Congress together and she was my sister. She was my best friend in Congress. She relied on that bible every night and every morning.’

Walorski’s brother told the crowd the family was suffering.

‘This is really, really hard,’ he said.

‘I did not want my mom to have to go through this and a funeral and who knows what else.

‘You can’t believe how much this hurts.’

But Tim Henke, the organizer of the vigil, said he hoped she would be remembered for her positive outlook.

‘When Jackie looked at you, she looked with eyes of hope,’ he said.

Warsaw Mayor Joe Thallemer, who was one of the last people to speak with the lawmaker, claims she was in town to learn more about recent successes in the medical device industry. Cars are pictured being towed away from the crash site

Walorski and her staffers were in Warsaw, Indiana earlier Wednesday visiting Medartis Headquarters. A car is being towed away from the scene after the crash

Indiana GOP House Speaker Todd Huston, back left, bows his head during a tribute to the beloved lawmaker

Under Indiana law, it will be up to local Republican officials to pick a candidate to replace Walorski on the election ballot.

Republican Gov. Eric Holcomb has the authority to schedule a special election to fill the remainder of Walorski’s current term, which ends this year.

The governor’s office and the state Republican Party both said Thursday it was too soon to say when those decisions would be made, as tributes to Walorski’s public service continued.

The U.S. Senate chaplain included her, Thomson and Potts in the chamber’s opening prayer, and Senate Republican leader Mitch McConnell praised all three in his opening remarks.

He acknowledged ‘how great a hole Jackie and her team are leaving behind’ at the Capitol.

In Indianapolis, members of the Indiana House, where Walorski served for six years before running for Congress, bowed their heads Thursday while Rep. Wesco said a prayer for Walorski.

Wesco called Walorski a ‘mentor’ who was ‘passionate in everything that she did.’

‘Her faith was central to her as a person, and her faith is what gives us hope today,’ Wesco said.

‘None of us are guaranteed tomorrow.’

Indiana’s last special election for a congressional seat was in 2010, when Republican Rep. Mark Souder resigned soon after winning the May primary.

Then-Gov. Mitch Daniels decided to hold the special election at the same time as the November general election for the full two-year term, citing the potential cost of a separate election and convenience for voters.

‘She wore her values and her conviction on that on her sleeve,’ Young said.

‘Unlike so many people in public life, she wasn’t really guarded about who she was and why she believed different things.’