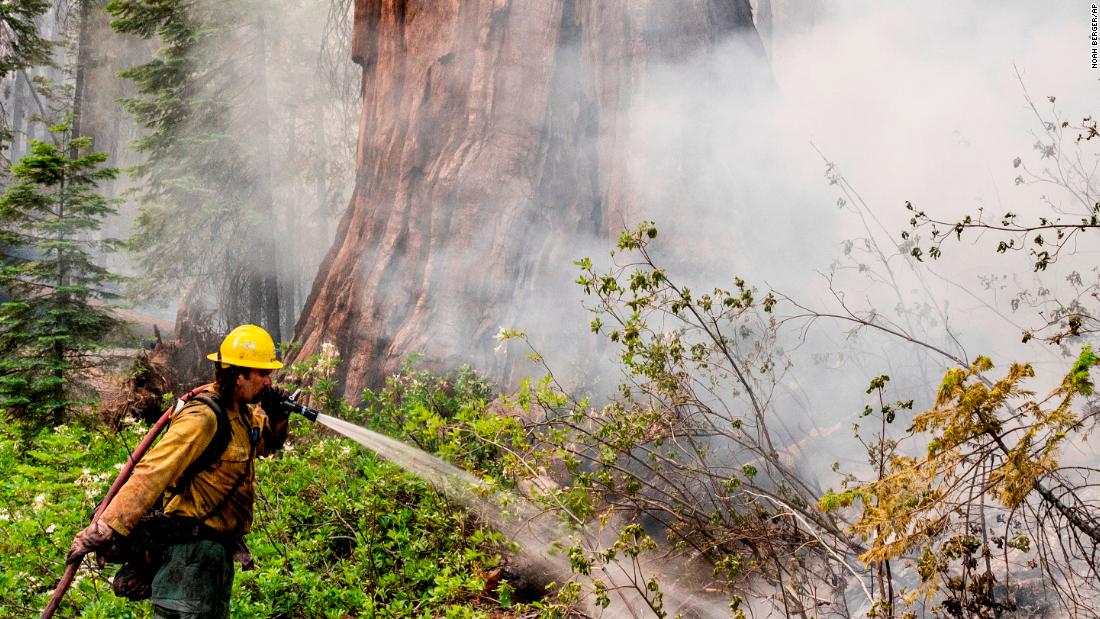 While officials say the trees have avoided significant damage so far, the 2,044-acre Washburn Fire doubled in size over the weekend, entering Yosemite’s Mariposa Grove, where more than 500 giant sequoias — some thought to be more than 2,000 years old — can tower to more than 20 stories.

“The fire has entered the grove,” Robbie Johnson, a spokesperson for the fire response, told CNN on Sunday evening. “But the good news is because of prescribed burns and clearing out material on the ground, it’s clear in the Mariposa Grove,” where protection efforts have yielded a “doughnut hole” shield.

Fire management teams also have installed a sprinkler system to dampen the ground around the park’s 209-foot-tall Grizzly Giant sequoia. And they’ve wrapped the historic Galen Clark cabin in protective foil, Yosemite spokesperson Scott Gediman said.
As firefighting continues, the park’s busy south entrance is closed Monday to visitors, and park officials have evacuated and closed the southern Wawona area and Mariposa Grove. While the rest of the park remains open, lines at other entrances are now longer, and visitors must be mindful of potentially unhealthy air quality in some places, including Yosemite Valley, due to the smoke, Gediman said.
Indeed, smoke from the Washburn Fire could impact people as far away as the San Francisco area, officials said, encouraging residents there to stay indoors and close windows. The warning comes as California’s fire season, which typically extends from late June through the fall, is becoming a year-round event.
As the climate crisis drives more wildfires in the western US, climate scientists have expressed concern national parks could become inaccessible to humans and uninhabitable for wildlife — if global fossil fuel emissions are not significantly reduced. The parks also have been plagued by extreme flooding and drought.

An evacuation order has been issued

The Washburn Fire was first reported July 7 and has drawn a crew of 545 fire personnel to the steep and densely wooded area, according to fire management site InciWeb. The cause of the fire is still under investigation.

Part of the blaze has been successfully contained at its origin point near Mariposa Grove, but the fire has continued to stretch northeast, officials say.

On Sunday, the fire was burning about five miles south of the community of Wawona, which could be threatened by “spotting,” which occurs when embers travel through the air and ignite other trees, Gediman explained. An evacuation order was issued Friday for the community and the park’s Wawona campground.

Hot and dry conditions will continue through the rest of the week, and the fire is expected to continue spreading, though its intensity may be reduced from scars left by previous fires, according to InciWeb.

While fire is a natural part of Yosemite’s ecosystem, severe burns like the Washburn Fire threaten the forest, Gediman said.

“Fire is important, in fact it’s critical for giant sequoias for them to have the seeds come out of the cones, to regenerate the soil, provide habitat for animals. … But it’s these high intensity fires that are causing the damage,” he said, citing the devastating Creek Fire which consumed nearly 400,000 acres of California’s Sierra National Forest area for several months in 2020.
Mariposa Grove was established in 1857, when Galen Clark — considered Yosemite’s first guardian — convinced lawmakers to include the grove as a protected area, according to the National Park Service. The grove in the Yosemite Valley was first set aside for public use by President Abraham Lincoln in 1864, eventually becoming a national park in 1890, park service records show.

A San Francisco area air quality agency encouraged residents Sunday to take precautions such as staying indoors and closing windows to stay away from smoke drifting into the region.

“Smoke from the Washburn Fire is forecast to be transported into the Bay Area and is expected to impact the North and East Bay regions,” the Bay Area Air Quality Management District said. However, the district stressed “pollutant levels are not expected to exceed the federal health standard.”

Last week, officials in southern California announced that region is bracing for a particularly challenging summer and fall of wildfires, as a prolonged drought has left vegetation brittle and dry. And even as fires continue to extend beyond the traditional season, worker shortages plague some firefighting crews.