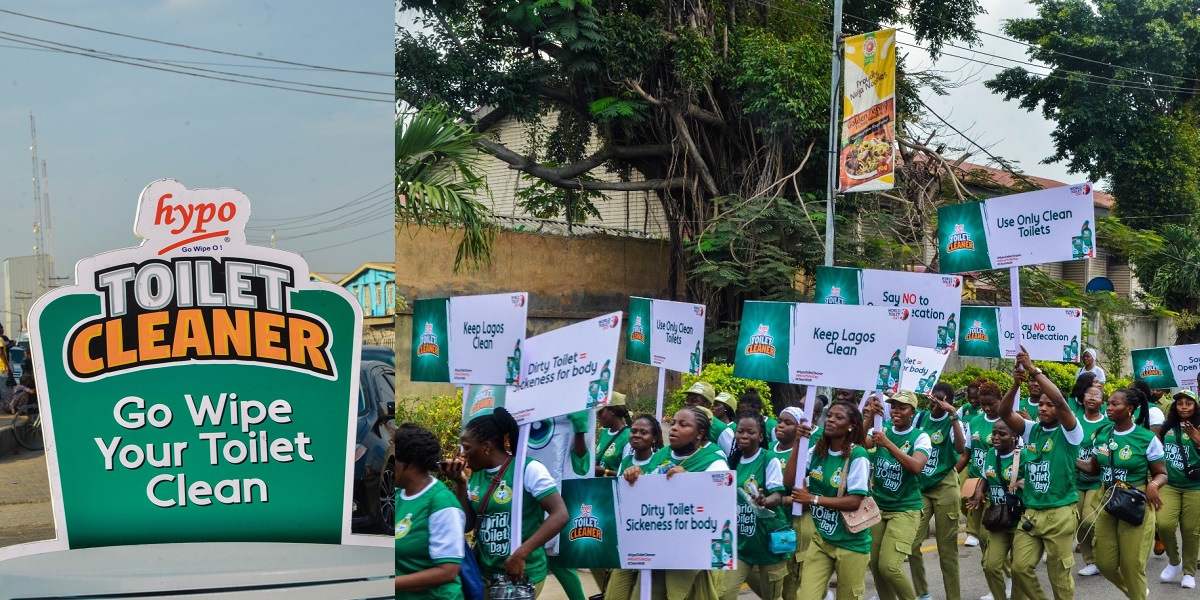 
In a bid to mark the 2022 edition of World Toilet Day tagged “Making the Invisible Visible”, Hypo Toilet Cleaner, Lagos State Ministry of Environment and Water Resources and National Youth Service Corp came together to sensitize Neighborhoods across 5 locations in Nigeria to sustaining safe toilet use and good toilet hygiene.

The brand’s initiative for this year took a diverse yet deeply engaging dimension, with activities spanning over 3 days beginning on Thursday 17th November 2022. A variety of call-to-action boards were deployed at strategic points around Lagos encouraging hygienic toilet practices and raising awareness around the dangers of open defecation.

The day after, Hypo Toilet Cleaner team went to Sura shopping complex on Lagos Island to commission another set of sixteen toilet units and two changing rooms which they had built for the community there. These are in addition to the previously commissioned facilities under the Hypo Toilet Rescue project, bringing the total number of refurbished facilities to over 130 across Nigeria.

The brand launched an integrated digital campaign in parallel which announced the presence of the mockup structures depicting safe use of toilet, stop open defecation and celebrating clean toilets, across the digital environment. The Toilet Rescue at Sura shopping complex was also captured live to stimulate public interest and involvement.

In the early hours of Saturday the 19th of November – the official World Toilet Day – members of the National Youth Corp, as well as government officials, showed up in high spirits to join Hypo Toilet Cleaner on their planned awareness walk. The parties converged at designated meeting points across the five locations: Lagos, Ibadan, Port Harcourt, Abuja & Kano for the sensitization exercise on safe toilet use and adverse impact of open defecation.

In Lagos, the celebrity of the day, Alex Asogwa a.k.a AlexUnusual, a Nigerian reality TV star, compere, and actress displayed a high level of energy leading the hygiene awareness walk along with the Nigerian Youth Corp members and officials. The walk kicked off from Eric Moore Road in Surulere and terminated at Teslim Balogun Stadium where musical entertainment and refreshments were already waiting to be served.

Hypo Toilet Cleaner Brand Manager Mr Chetan Katarki added, “We at Hypo Toilet Cleaner are committed to reducing open defecation and improving toilet hygiene, thereby creating a cleaner, safer Nigeria. Last week’s festivities provided us with the perfect platform to spread awareness of the dangers of open defecation and its impact on fellow citizens, as well as to highlight the importance of good toilet hygiene which minimizes risk of preventable disease. We are honored by the opportunity and humbled by the participation of so many purpose driven and enthusiastic NYSC corps members who lent their time and voice for this great cause.”