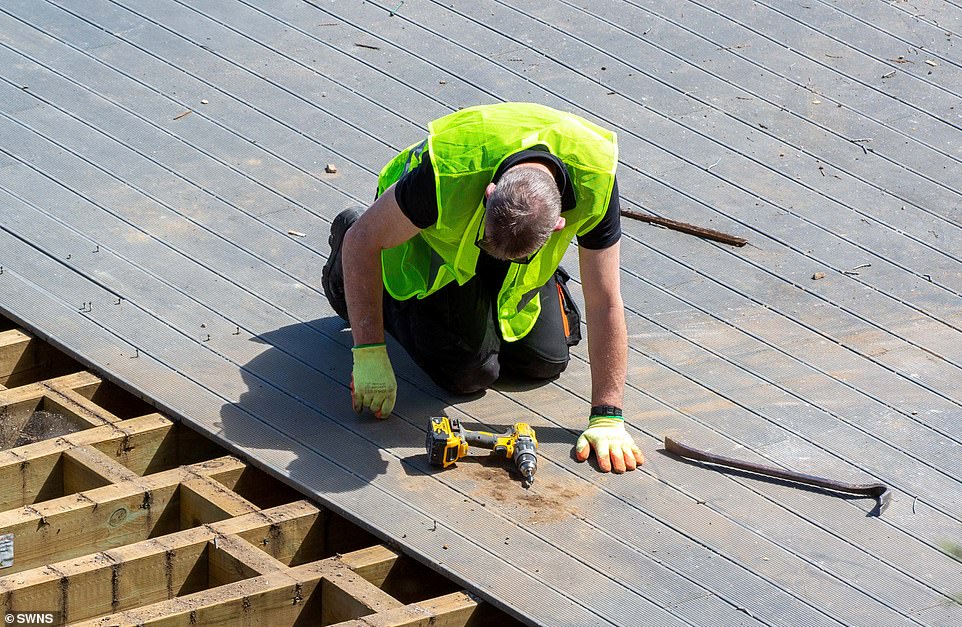 
A luxury hotel that hosted the G7 summit has finally started to dismantle its row of controversial ‘forest lodges’ that were erected without planning permission.

Carbis Bay Hotel built the rooms it said were required for the gathering of world leaders in June last year without getting the green light from Cornwall Council.

Furious campaigners then objected after discovering trees and wildlife habitats were ripped down and destroyed to make way for the buildings in spring 2021.

Cornwall Council had ordered the structures be dismantled, but the hotel had managed to stave off this request with appeals, which were all thrown out.

The notice requires the hotel to demolish the three buildings and reinstate the land to its former level, gradient and condition before the development was undertaken.

Today, workmen were on site as they continued tearing down the luxury chalets.

Many locals appeared to rejoice at news that the illegal lodges are finally being demolished.

Kirsty Whitwam posted on Facebook: ‘Good… they shouldn’t have gone ahead and built the damn things. Stick to the rules everyone else has to – get planning permission before tearing down habitat for our wildlife and building for G7. Makes me puke.’

Janet Crocker wrote: ‘This is down to people thinking they can do what they like, because they think they are above everyone else. No one has the right to change the landscape.’

Faith Davis said: ‘Love this, although the damage to the natural environment will take a long time to undo. I’m just glad they and their ilk have been made accountable. I sense the tide may be turning.’

Howard Farmer added: ‘I’m very glad, this shows that the planning authorities do have some teeth!’

Campaigners say even with the demolition of the huts outside the hotel, the natural habitat for local wildlife has been lost

The chalets were built by the hotel without planning permission, in order to be used by world leaders attending the G7 summit in Cornwall last year

Steve Wallis-Tayler said: ‘These buildings may now be being dismantled but the environmental damage will take years to repair, that’s if it ever does.

‘The owners should be ashamed but I suspect they have no shame.’

The dismantling of the lodges marks the end of a local planning saga that had dragged on for the last four years.

Alarm bells were first raised when a row of chalets, which the hotel had claimed were built as ‘meeting rooms’ for G7 in June 2021, appeared and struck a resounding resemblance to plans for forest lodges which had been rejected years ago.

The hotel had started work on the meeting rooms early in 2021 and only submitted a retrospective planning application after concern was raised by Cornwall Council.

However, the proprietors later withdrew the application prompting the enforcement notice to be issued.

BEFORE: The Carbis Bay Hotel built the beachside huts while it was in the spotlight of the world’s media as the venue of last year’s G7 summit in St Ives, Cornwall

AFTER: Work has finally started to dismantle the row of controversial forest lodges built without planning permission

Workers could be seen this week tearing down the huts

An aerial view of the venue at Carbis Bay, Cornwall, in April last year. The summit was the first meeting between G7 leaders since the beginning of the pandemic

A notice ordered the hotel to demolish the three buildings and reinstate the land to its former level, gradient and condition

The Planning Inspectorate would eventually rule the notice should be upheld.

Announcing his decision, Inspector Peter Jarratt said: ‘I have found very significant harm to the character and appearance of the landscape which is contrary to national and local policies.

‘Whilst issues relating to ecology and biodiversity, and to drainage, coastal and land stability could be mitigated through the imposition of appropriately worded conditions these would not overcome the level of harm I have found.

‘Although it is to the hotel’s considerable credit that it has hosted the G7 summit and now wishes to adapt the meeting rooms to holiday accommodation, the economic benefits arising from the development… are insufficient to outweigh the harm to the landscape.’

The new sites, which would have included a spa with multiple two-storey forest lodges, were intended to ‘keep up with the growing’ demand of the business, run by father and son pair Stephen and Malcolm Baker.

But they met a brick wall in terms of local resistance after more than 400 people originally objected to the plans.

Photographs showed Boris Johnson and his wife leading his counterparts, including US President Joe Biden and his wife Jill, across the temporary bridge on the Cornish beach last June

Planning officers at Cornwall Council saw the harm to the area as overriding any potential boost to the local economy.

St Ives Town Council submitted a ‘strongest’ objection on the grounds it would harm the use of the footpath and beach.

Meanwhile, the National Trust said the builds would ‘diminish the important contribution made by the site to the undeveloped hillside.’

Local fury began to boil over again last year after it was announced the Carbis Bay Hotel would host world leaders during the global G7 summit in June 2021.

Furious locals claimed the hotel was ripping down trees and destroying badger setts in a bid to erect the controversial ‘forest huts’. The hotel has always claimed no badgers were harmed.