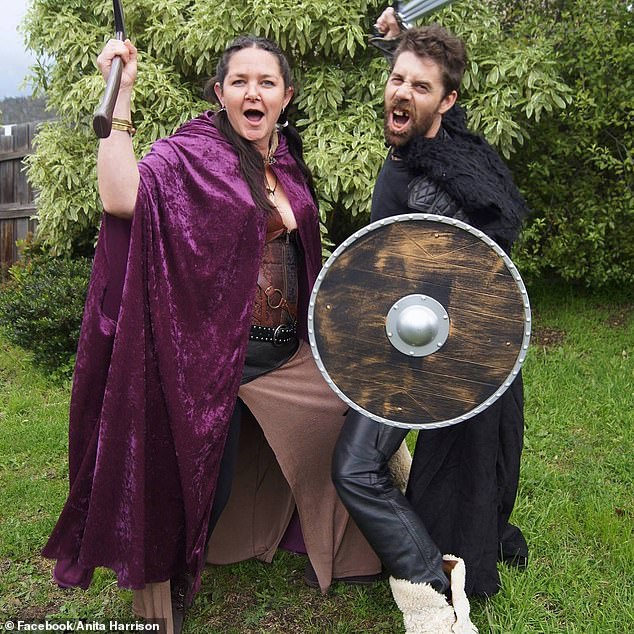 
A woman left fighting for life in a coma after a horror car crash is yet to learn her partner of more than a decade was killed in the accident.

Aron Thogersen, 43, was driving on Huon Road at Longley, in Tasmania‘s southeast, about 12.30am on Sunday when he failed to negotiate a right-hand curve in the road and collided with a concrete bridge, police say.

Mr Thogerson was declared dead at the scene while his partner Anita Harrison, also 43, was cut from their red Nissan Micra and rushed to Royal Hobart Hospital with serious injuries.

Ms Harrison is in a stable condition but is yet to wake to learn her beloved partner is gone.

Faith Tklac, a friend of the couple, said Ms Harrison will be heartbroken when she hears the news.

‘How Anita is going to manage without her soulmate is beyond me,’ Ms Tklac told Daily Mail Australia.

‘Without that beautiful man beside her it’s going to be tough.

‘But she will survive. She’s the strongest woman I know. ‘

Devastated loved ones have remembered Mr Thogersen as ‘the kindest person’, a ‘wonderful friend’, and ‘an absolute legend of a man’.

Ms Tkalac said the labourer was the nicest person you could ever meet and had a ‘beautiful face’ that lit up any room.

‘You hear that all the time, but with him, it was just so true,’ she said.

‘It could be the worst day of your life – and I have lived it – and Aron could still make you smile.

‘Our town will never be the same without him.’

The couple were travelling in a red Nissan Micra on Huon Road, Longley (pictured) during the early hours of Sunday morning when they crashed

Bel Royle described Mr Thogersen as a ‘gorgeous man with a beautiful heart and soul’.

Another friend Cyn Sideris said her ‘soul was crushed’ learning of his death.

‘You always made laugh and treated me well,’ she wrote on Facebook.

‘Let the heavens open and look after you.

‘Till we meet again.’

The couple, from Ranelagh, do not share any children but both have kids from previous relationships, who their loved ones have rallied to support during this difficult time.

In a post on Facebook, Ms Harrison’s adult son said his mother’s condition ‘is currently tracking well, but things are still very unclear at this point’.

Friend Jasmine Flannery has set up a GoFundMe page to help cover funeral costs and supplies for their three dependant children in a bid to ease the burden on Ms Harrison as she recovers.

‘We don’t want Anita waking up from a coma to deal with the costs of a funeral, bills like her house mortgage as well as having to recover from the accident and deal with losing the love of her life,’ Ms Flannery wrote on the fundraiser.

‘Some of the money will also go to looking after their children – to help their families cover costs for food and credit for phones they need to stay connected and anything else that may arise.’

Tasmania Police are continuing to investigate the crash and a report will be prepared for the coroner.

‘Vehicle speed and the use of alcohol is believed to be contributing factors to the cause of the crash, ‘he said.

‘Both occupants were wearing seatbelts. At the time the road was dry, weather was clear, and traffic was light.

‘The cause of the crash continues to be investigated.’

Anyone with information in relation to the crash is urged contact crash investigation services on 62302111 or Crimestoppers on 1800 333 000.