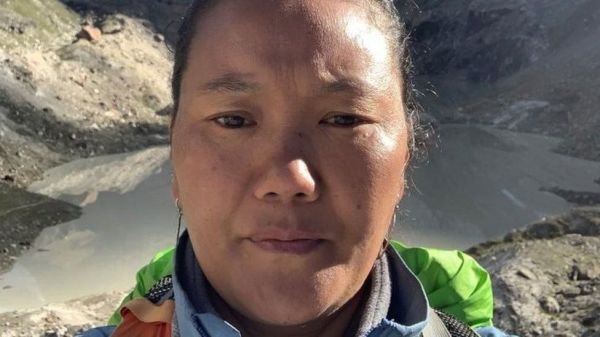 
At the age of 48, Lhakpa Sherpa has just climbed Mount Everest for the 10th time but all her life she has been rising to challenges and meeting them.

Her 10-time achievement, reported by her brother and confirmed by a Nepalese official, makes her the first woman to do so.

The Nepalese single mother was born in a cave, had no formal education and worked as a janitor.

“I felt like I’d reached my dream when I reached Everest’s summit for the first time,” she told the BBC ahead of Thursday’s climb.

“I thought to myself, ‘No more just being a housewife!’

“I felt like I’d changed Sherpa culture, the status of Sherpa women and Nepali women. I enjoyed being outside of my home and I wanted to share that feeling with all women.”

Lhakpa was chosen by the BBC as one its 100 most inspirational and influential women for 2016.

News of her 10th summit was broken by her brother Mingma Gelu Sherpa, who said she had reached the top at 06:15 (00:30 GMT). Nepali tourism official Bhishma Kumar Bhattarai confirmed the report for Reuters news agency.

Speaking from base camp earlier, her youngest daughter Shiny, 15, told the BBC she was excited and keenly watching her mother’s progress.

“I look up to my mum,” she said. “She has achieved so much even though she had nothing.”

However, Lhakpa’s hard work and achievements have yet to translate into wealth and recognition.

She began life in a village more than 4,000m (13,000ft) above sea level in the Makalu region of eastern Nepal. She is a member of the Sherpa ethnic group, descended from nomadic Tibetans, who are used to living in hostile high altitudes.

“I was born in a cave,” she said, breaking into laughter. “I don’t even know my date of birth. My passport says I am 48.”
“I remember having to walk for hours, sometimes carrying my brothers to school, only to be turned away when I got there. At the time, girls were not allowed to go to school.”

Agriculture was the mainstay for her village, which had no electricity. What it did have was a certain magical neighbour.
“I grew up right next to Everest,” she recalled. “I could see it from my home. Everest continues to inspire and excite me.”
Since the first conquest of the mountain in 1953, more and more people have tried to scale the peak every year. Those who do so inevitably hire Sherpa guides and porters. But some Sherpas, like Lhakpa, set out to become mountaineers in their own right.

It was not an easy transition. Lhakpa’s parents didn’t back her.

“My mum said I would never get married,” she told the BBC. “She warned me that I would become too masculine and undesirable. The villagers told me that it’s a man’s job and I would die if I tried it.”

She brushed aside those concerns and made it to Everest’s highest ridge in 2000. In 2003, she became the first woman to scale Everest three times – and more records followed.

During her 2003 climb, she was joined by her brother and sister, becoming the first three siblings simultaneously on an 8,000-metre-high mountain. The Guinness Book of World Records recognised the feat.