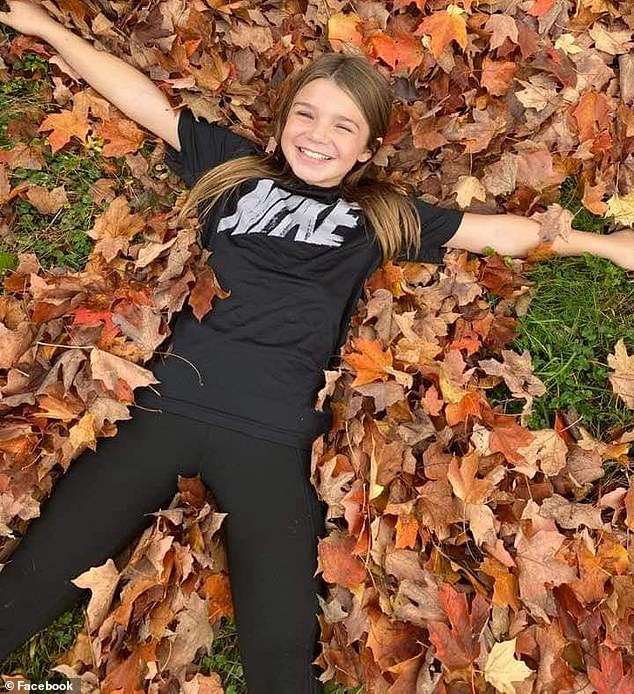 
Wisconsin cops launch desperate hunt for killer after girl, 10, was found dead near walking trail after vanishing while visiting her aunt’s house

Police in Wisconsin have launched a manhunt after a 10-year-old girl who had been missing since Sunday night was found dead along a walking trail.

The body of Lily Peters was found in woodland near Chippewa Falls, northeast of Eau Claire on Monday morning, close to the home of an aunt she’d been visiting when she vanished.

Peters was a fourth-grader at Parkview Elementary in the town.

On Monday afternoon, Chippewa Falls Police Chief Matt Kelm, confirmed the girls’ disappearance was being investigated as a homicide.

The body of Lily Peters was found in woodland near close to a walking trail in Chippewa Falls, northeast of Eau Claire, Wisconsin on Monday morning

Chippewa Falls police called in multiple agencies to help with the search, including K9 teams and drone operators

Kelm urged the public to remain vigilant with no suspect yet in custody.

The little girls’ body and her bike were found close to Leinenkugel’s Brewery.

Kelm said that police were following up a number of leads with ‘numerous’ agencies assisting with the investigation.

The youngster was last seen by relatives while she visited an aunt’s home in Chippewa Falls, according to officers.

Her father notified police at about 9pm on Sunday night that his daughter was missing. The girl lives just four blocks from her aunt’s house according to WQOW.

Further details of the timeline have yet to be shared, including whether Peters vanished while walking home from her aunt’s house.

Kelm told reporters there are no known suspects at this point, but investigators are pursuing leads.

‘We will be working diligently and tirelessly on this case,’ Kelm promised.

Chippewa Falls police called in multiple agencies to help with the search, including K9 teams and drone operators. The chief said finding Lily and the circumstances behind her death were difficult for everyone involved.

Kelm, himself, choked up during the news conference as he announced Peters’ death.

‘As you can imagine, our first responders are tremendously impacted by anything that impacts one of our children,’ Kelm said, ‘so it is very difficult for them, and the investigators.’

Jeff Holmes, superintendent of the Chippewa Falls Area Unified School District Superintendent, sent a letter home to families recommending that children normally walk to and from school ‘be picked up and dropped off by trusted family members or friends until further notice. … Our buildings are on high alert; however, law enforcement has not indicated the need to consider lockdown settings at this time.’

Holmes told families ‘we feel that it is important for you to know about what we may share at this time. We do not plan to formally announce what happened, as we are not privy to those details — we believe that law enforcement needs to be the ones to decide what or how much to share in that regard.

‘We also believe that parents should be the ones to share and engage in discussion with their children about this tragic event to the greatest extent possible. However, we know that some of our students may be affected and some of our students may have conversations amongst themselves and with staff members. … Cardinal Care counseling services can be accessed by any student. … Thank you for your kindness and compassion for the student and the family during this tragic time.’