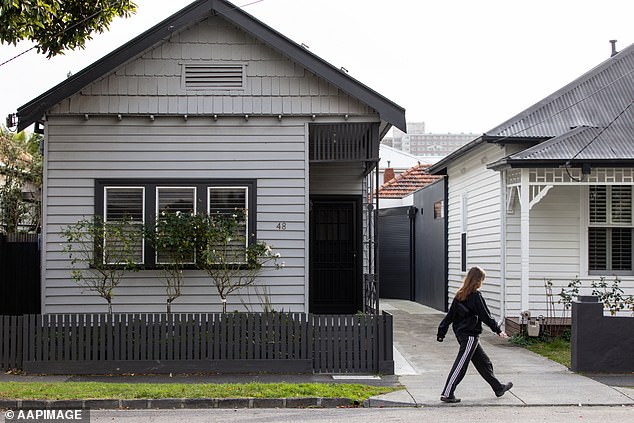 Deutsche Bank and Compare the Market are both expecting the Reserve Bank will tomorrow hike the cash rate up from a three-year high of 1.35 per cent to a seven-year high of 2.1 per cent.

The big banks, however, are predicting a less severe 50 basis point rate rise that would take the cash rate to a six-year high of 1.85 per cent.

A super-sized 75 basis point or 0.75 percentage point rate rise would see a borrower with an average $600,000 loan owe an extra $256 on their monthly repayments compared with now.

This would also be the biggest monthly rate rise since December 1994.

Property values in upmarket and inner-city suburbs of Sydney and Melbourne have, so far, been the worst affected by higher interest rates, with median house prices diving by double-digit figures since peaking late last year and early this year.

Deutsche Bank and Compare the Market are both expecting the Reserve Bank at its August meeting to hike the cash rate up from a three-year high of 1.35 per cent to a seven-year high of 2.1 per cent. A 75 basis point, or 0.75 percentage point rate rise, would see a borrower with an average $600,000 loan owe an extra $256 on their monthly repayments compared with now.

Borrowers in May, June and July have already copped rate rises of 1.25 percentage points, the steepest climb since 1994.

Speculation about higher interest rates saw the property market peak by the start of 2022, with richer suburbs more affected.

SYDNEY NORTHERN BEACHES: Down 10 per cent since January 2022 peak

SYDNEY SUTHERLAND: Down 8.5 per cent since January 2022 peak

MELBOURNE INNER: Down 8.2 per cent since October 2021 peak

The median house price in Sydney’s inner south, covering gentrified Redfern and Newtown, has plunged by 14.5 per cent since peaking in October 2021, CoreLogic data showed.

This upmarket part of Sydney, stretching from the city to Botany Bay, has house prices of $2,023,097 in the top quarter.

Sydney’s northern beaches had also suffered a double-digit decline in less than a year, with a 10 per cent drop from the January 2022 peak.

The median house price in this area, stretching from Manly on Sydney Harbour to Palm Beach, fell by 2.5 per cent in July to $2,499,569, for a quarterly decline of 7.8 per cent.

It was far from the only coastal area to suffer a sharp fall with Sutherland values tumbling by 8.5 per cent since peaking in January 2022.

Homes in this part of southern Sydney, covering Cronulla and Miranda, fell by 3 per cent in July to $1,606,651 for a quarterly decline of 6.3 per cent.

Inner Melbourne, covering St Kilda and Brunswick, has suffered an 8.2 per cent decline since peaking in October 2021.

CoreLogic research director Tim Lawless said Sydney and Melbourne were more likely to suffer property price drops of more than 15 per cent, up to 20 per cent, making this potentially a worse downturn than the early 1980s.

‘The rate of decline is clearly accelerating,’ he told Daily Mail Australia.

‘Considering the expected interest rate trajectory, there is a good chance the rate of decline will outpace the trajectory of earlier downturns, and we will probably see housing values fall by a larger amount that the peak to trough declines recorded since the early 1980s.’

Since peaking in January 2022, Sydney property prices have fallen by more than five per cent but in upmarket areas, the decline is more than double that.

‘It probably will, absolutely,’ he said.

‘Interest rates will rise quite a bit further through the rest of this year, potentially into next year before stabilising.

‘Higher interest rates are a downside risk for housing markets and that’s why we’re seeing forecasts quite pessimistic for where housing prices might land.’

All the banks are expecting the Reserve Bank to follow up with another 50 basis point rate rise in September, which would be the fourth consecutive half a percentage point increase since May.

ANZ is expecting the cash rate to peak at 3.35 per cent in November while Westpac is predicting that tightening cycle peak in February.

The Commonwealth Bank is forecasting a 2.6 per cent cash rate by November while NAB has a 2.85 per cent rate in that month.

Inflation in the year to June surged by 6.1 per cent, the fastest pace since 2001.

When the GST introduction was taken out, it was the steepest annual increase since 1990.

What a 0.75 percentage point rate rise in August would mean for you