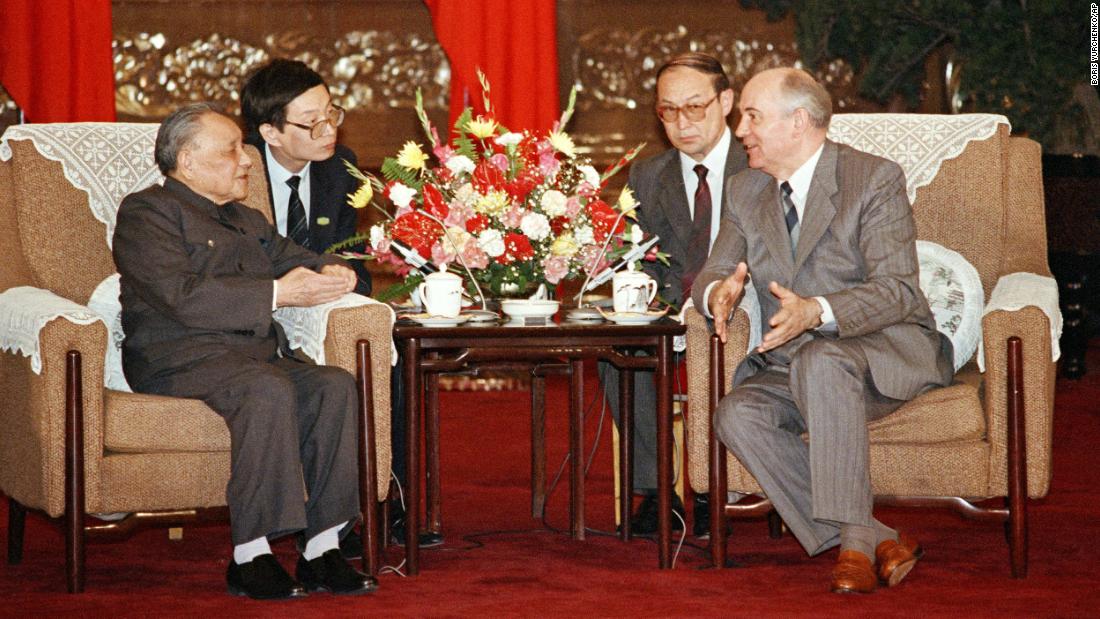 But in China, Gorbachev’s legacy is seen in a different light, as it raises the specter of a historical event that has long been cited as a cautionary tale for the ruling Communist Party: the fall of the Soviet Union.

Gorbachev, who presided over the Soviet Union from 1985 until its collapse at the end of 1991, is widely credited with helping to end the Cold War and introducing key political and economic reforms to the USSR.

For an entire generation of Chinese leaders, however, Gorbachev has come to represent the perils of embracing democratic reforms, with officials long suggesting Communist-ruled China could face a similar fate to former ideological cousin the USSR if internal politics are left unchecked.

Beijing’s official response to Gorbachev’s death has been brief. A spokesman for China’s Foreign Ministry, when asked for comment in a briefing Wednesday, said Gorbachev “had made positive contributions to the normalization of relations between China and the Soviet Union.”

“We express our condolences to his family on his death caused by illness,” the spokesman said.

As news of the former leader’s death trended on Chinese social media platform Weibo on Wednesday morning, many users expressed their feelings of witnessing history and the end of an era, but some took a harder line.

“The Soviet Union was destroyed by him and the generations after him,” wrote one user, who also asked if Gorbachev would be “ashamed” to meet Communist thinkers Karl Marx and Vladimir Lenin after death. Others pointed sarcastically to how Gorbachev was loved by the United States and the West.

Prominent nationalist voice Hu Xijin in a post on Twitter Wednesday accused Gorbachev of winning “widespread acclaim in the West by selling out the interests of his homeland.”

State-run nationalist tabloid Global Times pointed to similar criticisms in an English-language article published Wednesday, in which it attributed the collapse of the Soviet Union to “the partial democratization of Soviet society under Gorbachev.”

“As a lesson for China’s own governance, the Communist Party of China upholds its own socialist path with Chinese characteristics, underscoring political maturity and sobriety,” the article said.

Reflecting on the disintegration of the Soviet Union in recent years, Gorbachev said there was nothing in his speeches “until the very end” that had supported the breakup of the vast transcontinental country — an event he described as a “betrayal” by various actors.

But the collapse of consolidated Communist control over Eastern Europe and Russia as former Soviet nations declared independence under his watch, has made him — and that era — the subject of intense study by the Chinese Communist Party in the decades since.

Among those believed to have been closely observing the dynamics that led to the Soviet Union’s fall is Chinese leader Xi Jinping, the country’s strongest ruler in decades who is expected to break protocol and step into a third term next month.

During his decade in power, Xi has revitalized the centrality of the Communist Party in daily life, framed socialist ideology as critical to China’s rise, and presided over a crackdown on any elements of society deemed by the Party to be potential proponents of Western-style democracy.

In a 2013 speech delivered to Party cadres months after coming to power, Xi asked why the Soviet Union and its ruling Communist Party collapsed. The answer, to Xi, was clear: “ideological confusion” as a political struggle within the country denied the history of the Soviet Union, its party and former leaders like Lenin and Joseph Stalin.

Because of this, Xi said, “party organizations at all levels had almost no effect, and even the army was no longer under the leadership of the party. In the end, the Soviet Communist Party, such a huge party, fell apart.”

Early in Xi’s first term, the Party was involved in the production of documentaries about the collapse of the Soviet Union, laying the blame on Gorbachev’s introduction of Western-style democratic reforms and failures to uphold the existing system.

Documentaries were used as instructive materials for cadres, while state media pumped out articles warning of the risks for China if it followed a similar path — similarly reinforcing Xi’s demand to strengthen China’s Communist Party.

The legacy of Gorbachev also strikes a nerve in China due to a state visit by the former Soviet leader to Beijing in May 1989, which drew the world’s media attention there at a formative moment of social reckoning.

Gorbachev arrived in Beijing as student protesters occupied Tiananmen Square as part of a mass movement calling for democratic reforms in China.

The students welcomed Gorbachev as the “Ambassador of Democracy” and shattered the plans of China’s paramount leader Deng Xiaoping for a state visit focused on celebrating China’s rapprochement with the Soviet Union.
Instead, Gorbachev expanded on his vision for the direction of socialism during an address in Beijing, delivered at a time when he was already known in China not only for his market reforms but an opening up of the Soviet political system.

“Economic reform will not work unless supported by a radical transformation of the political system,” Gorbachev said in his remarks, according to author Chris Miller in “The Struggle to Save the Soviet Economy: Mikhail Gorbachev and the Collapse of the USSR.”

“We are participating in a very serious turning point in the development of world socialism,” Gorbachev said, adding that many socialist countries were embracing freedom of expression, protection of rights and democracy. His comments were not broadcast in China, Miller wrote.

Weeks later, Chinese leaders took a different route than the one outlined by Gorbachev during his trip Beijing, ordering a brutal, deadly military crackdown that cost the lives of hundreds, if not thousands, of unarmed pro-democracy protesters — setting China on a path of overhauling its economy without democratic reform.