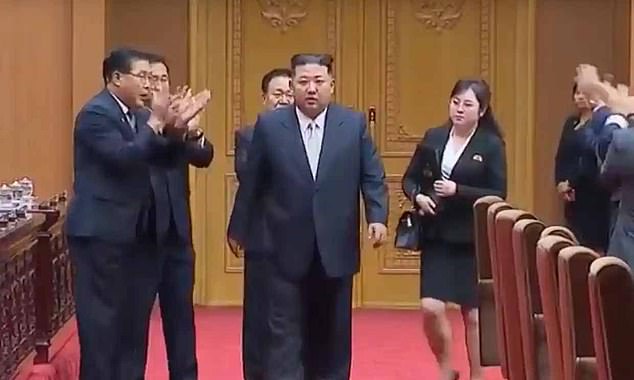 
North Korean dictator Kim Jong-un has been pictured alongside a mystery new female figure in recent months whose identity has stumped experts and raised suspicions the tyrant may be bringing more family members to the fore.

She also featured prominently in state media coverage of a recent Kim speech in which he announced North Korea would never give up nuclear weapons and would be prepared to launch nuclear strikes if attacked.

The true identity of the ‘assistant’ remains unknown but North Korean defectors and NKNews – a US-based organisation dedicated to reporting and researching the isolationist nation – have suggested she may be Kim Jong-un’s half-sister born in the 1970s.

North Korean defectors and South Korea’s Ministry of Unification claim the dictator has a 48-year-old half-sister named Kim Sol-song, who would likely be involved in his government given his 34-year-old sister Kim Yo-jong’s prominent role as her brother’s de-facto deputy and chief propagandist.

A North Korean defector who claims to have worked as a party secretary in Kim’s government told NKNews he had seen Kim Sol-song in the flesh multiple times.

The US-based outlet claimed the description he gave of her closely matches the mystery woman pictured in state media images, but their relationship has not yet been officially confirmed.

If the woman in question is in fact Kim Sol-song she brings a wealth of experience to her role, having served her father – the former leader Kim Jong-il – as an event director before his death in 2011.

‘It involves coordinating the leader’s schedule, his security arrangements, protocol and press coverage requirements,’ he said.

‘In a political culture like North Korea’s, it is a pretty critical job as this individual controls what elite North Korean citizens have access to the leader – at least for public events.’

‘In contrast to other political cultures in the world, a North Korean elite does not necessarily need a public profile in order to establish his or her power or influence.

‘But it would certainly be quite fascinating if she were to transition to a public role, and to ponder the internal dynamics behind that kind of move.’

The woman, who has been tentatively identified as Kim Sol-song, the dictator’s half sister, has been seen watching over the dictator

The North Korean leader is believed to have at least one other half-sister who has been named as Kim Chun-song, also born in the 1970s, but very little is known about her.

His younger sister however, Kim Yo-jong, has assumed a hugely influential role in the North Korean government and is arguably the nation’s most important figure besides Kim Jong-un himself.

‘She is one of a very few people who can talk freely about anything with the leader Kim,’ said Yang Moo-jin, a professor at the University of North Korea Studies in Seoul.

This photo provided on Aug. 14, 2022, by the North Korean government, Kim Yo Jong, sister of North Korean leader Kim Jong Un, delivers a speech during the national meeting against the coronavirus, in Pyongyang

‘She must have far bigger capacity than any other North Korean official when it comes to decision-making and policy coordination with the leader,’ he said, adding she is fluent in English and French, having been educated in Switzerland.

Yo-jong is the North Korean tyrant’s de-facto deputy and often represents him on the international stage, calling out other world leaders and helping to curate his image.

The powerful sister in August said South Korea’s president should ‘shut his mouth’ after he reiterated that his country was willing to provide economic aid in return for nuclear disarmament.

‘It would have been more favourable for his image to shut his mouth, rather than talking nonsense as he had nothing better to say,’ Kim Yo-jong said in a statement released by state news agency KCNA, calling Yoon ‘really simple and still childish’ to think that he could trade economic cooperation for the North’s honour and nuclear weapons.

‘No one barters its destiny for corn cake,’ she added.