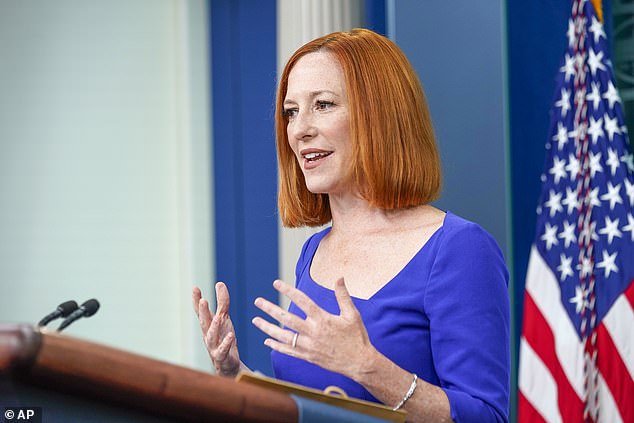 
The White House on Friday condemned as ‘deeply disturbing’ video footage from Jerusalem of Israeli police using batons to beat back pallbearers carrying the casket of slain Palestinian-American journalist for Al Jazeera.

She spoke after broadcast images of the attack on mourners carrying the casket of slain Al Jazeera reporter Shireen Abu Akleh through streets, with Israeli police seen ripping away Palestinian flags and beating mourners as they made their way to a Catholic Church in the old city, in defiance of security orders.

‘Well, I would say first that we have all seen those images, they’re obviously deeply disturbing,’ Psaki said when asked about the event, which followed the shooting of the TV journalist, who was a fixture on the network and is a U.S. citizen. The Israel Defense Forces have admitted that the IDF may have shot the reporter during a raid in the West Bank.

‘This is a day where we should all be marking – including everyone there – the memory of a remarkable journalist who lost her life. With the disturbing footage from the funeral procession procession today in Jerusalem. We regret the intrusion into what should have been a peaceful procession. We’ve urged respect for the funeral procession the mourners and the family at this sensitive time,’ she continued.

She said the administration was ‘in close touch with Israeli and Palestinian authorities’ and would continue those contacts. ‘We’re not currently involved in any of the investigation, but we are working to bridge cooperation and available to provide assistance as needed,’ she said.

Her comment on the images, but not precisely the actions of Israeli security, prompted a question about whether the White House condemned the actions or believed they could be justified.

‘I think when we said they were disturbing we obviously, we’re not justifying them, but I will leave my comments at what I said,’ said Psaki, exercising caution while discussing a key U.S. ally.

‘The United States again extends our deepest condolences to the family and loved ones of Shireen Abu Akleh, a renowned Palestinian American journalist,’ he said.

‘We were deeply troubled to see the images of Israeli police intruding into her funeral procession today. Every family deserves to be able to lay their loved ones to rest in a dignified and unimpeded manner. We remain in close contact with our Israeli and Palestinian counterparts and call on all to maintain calm and avoid any actions that could further escalate tensions,’ his statement continued.

Shireen Abu Akleh was a fixture on the Al Jazeera network

The Israelis and Palestinians are both investigating, but it was not clear the U.S. would play any role in untangling what happened.

‘We’ve offered our assistance to the Israelis, the Palestinians and are prepared to provide that should they want it,’ Psaki said.

The incident occurred as the procession attempted to take the coffin of Abu Akleh – who was a Christian – to a nearby church for the funeral.

Al Jazeera report that the Israeli government had forbidden the procession from walking the coffin 45 minutes to the church and had insisted that the body be taken in a hearse.

They had also warned the brother of Abu Akleh to limit the size of the funeral procession and they forbid Palestinian flags from being displayed or slogans being chanted.

The Qatari-owned media outlet even report that Israeli soldiers had been asking people entering the church if they were Muslim or Christian and barring entry to the former.

‘By our blood, and our soul, we will avenge your death,’ protestors chanted at Israeli forces obstructing them from accompanying the coffin to the church.

The scenes come as Israel admits that it may have been one of its soldiers that shot and killed the veteran Palestinian reporter during a West Bank raid on Wednesday.

Shireen Abu Akleh, 51, a well known television personality in the Middle East, was fatally shot in the face while she reported on an IDF raid of a refugee camp in the north West Bank town of Jenin.

Initially both sides had pointed the finger at the other, with Al Jazeera and Qatar – which owns the media outlet – blaming an Israeli sniper for firing at their reporters who were clearly marked as press.

In response, Israel released a short video of a Palestinian gunmen firing down a corridor, saying militants had been firing ‘indiscriminately’ and that Abu Akleh was ‘likely’ killed by one of them.

The video was swiftly debunked by online sleuths including B’Tselem, The Israeli Information Center for Human Rights in the Occupied Territories, which showed that Palestinian gunmen seen in the video had no line of sight towards the location where Abu Akleh was killed.

Israeli sources have since started walking back their assertions, with Benny Gantz, the Israeli defence minister, conceding that she could have been shot by fire from ‘our side’.

The memorial procession of veteran Al Jazeera journalist Shireen Abu Akleh, killed during an Israeli raid on a refugee camp in the West Bank on Wednesday

The body of slain Al Jazeera reporter Shireen Abu Akleh, 51, lies on the ground while her colleague, Shatha Hanaysheh, covers her mouth in shock as the sniper keeps shooting

‘A soldier with a rifle and a very good aiming system was shooting toward a terrorist with an M16, in very good condition, very clear picture, that was shooting on our troops,’ an IDF official speaking on condition of anonymity told the Washington Post.

‘What we are checking now is the location of Shireen.’

Investigators have confiscated rifles from the IDF soldiers involved in the raid for ballistic testing.

Israel has called for a joint investigation into Abu Akleh’s death with the Palestinian Authority, which administers parts of the West Bank and cooperates with it on security.

Palestinian President Mahmoud Abbas angrily rejected the proposal, saying ‘we hold the Israeli occupation authorities fully responsible for killing her,’ even as thousands gathered to mourn the slain Al Jazeera journalist in the occupied West Bank city of Ramallah yesterday.

‘They cannot hide the truth with this crime,’ Abbas said in an address as her body lay in state with a Palestinian flag draped over it in the West Bank city of Ramallah, where the Palestinian Authority is headquartered.

‘They are the ones who committed the crime, and because we do not trust them, we will immediately go to the International Criminal Court,’ Abbas said.

The ICC launched an investigation into possible Israeli war crimes over a year ago. Israel has rejected that probe as being biased against it.

Hussein al-Sheikh, a senior aide to Abbas, said that the Palestinians would conduct their own independent probe and convey the results ‘with high transparency.’

He rejected an Israeli request to conduct its own ballistic analysis on the bullet.

Israeli Prime Minister Naftali Bennett accused the Palestinians of denying Israel ‘access to the basic findings required to get to the truth.’

Israel’s Prime Minister Naftali Bennett had claimed it was ‘likely’ Abu Akleh was shot by Palestinian militants. He accused the Palestinians of denying Israel ‘access to the basic findings required to get to the truth’ over an investigation

Tributes are paid to murdered Palestinian journalist Shireen Abu Akleh at a protest and vigil at BBC Broadcasting House on May 12, 2022 in London

‘The announcement of an investigation is one of Israel’s tried and unfortunately successful tricks in the blanket impunity Israel provides itself,’ he said.

‘Israel does not investigate. Israel whitewashes, and the announcement of the  investigation is just the first stage in this whitewash,’ he added.

‘The investigations are not meant to establish accountability. They are meant to protect the perpetrators.’

Abu Akleh was killed while covering an Israeli military raid in Jenin, which has emerged as a militant bastion in recent weeks as Palestinians have carried out a series of deadly attacks and Israel has launched military raids across the occupied West Bank.

Her death was met with an outpouring of grief across the Arab world. The 51-year-old was well-known as a veteran on-air correspondent for Al Jazeera’s Arabic-language channel.

Israeli forces take a Palestinian into custody, while they attend a condolence event held at a church for Al Jazeera journalist Shireen Abu Akleh

Her reporting shed light on the harsh realities of Israeli military rule, which is well into its sixth decade with no end in sight. She was also a U.S. citizen.

Her body was to be brought to Jerusalem, where she was born, for burial on Friday.

The killing sparked international condemnation and widespread calls for accountability.

U.N. Secretary General Antonio Gutteres called for an ‘an independent and transparent investigation’ to ensure those responsible are held to account.

Israeli Defense Minister Benny Gantz on Wednesday promised such an inquiry, saying he was in touch with U.S. and Palestinian officials and hoped for cooperation between Israel and the Palestinians.

‘We are trying to figure out exactly what happened,’ he said. ‘I don’t have final conclusions.’

Asked about the investigation and Israel’s offer for the Palestinians to participate, White House press secretary Jen Psaki said Thursday that U.S. officials ‘stand ready to assist either party in any way that we can.’

‘Neither side has asked for our assistance at this time and such a request would be required in order for us to do so,’ she said.

Abu Akleh’s death could draw new scrutiny of Israel’s military justice system, which is being examined as part of the ICC probe. It also threatened to further strain often rocky relations between the army and the international media.

Rights groups say Israel rarely follows through on investigations of deadly encounters with Palestinians, and that when it does, it often hands down lenient punishments.

Her death comes amid a wave of Israeli-Palestinian violence that has been fuelled by tensions at a key Jerusalem holy site.

At least 18 people have been killed in Palestinian attacks in recent weeks, as well as more than 30 Palestinians, most of them involved in attacks or clashes with Israeli forces. Among the slain Palestinians were an unarmed woman and at least two apparent passersby, fuelling criticism that Israel often uses excessive force.