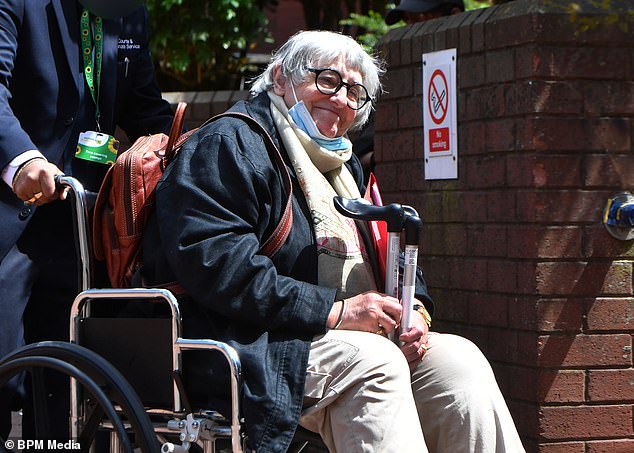 
An elderly academic who made her neighbour’s life a ‘misery’ in a decades-long feud sparked by a Frank Sinatra record has been jailed – days after going on the run.

Wheelchair user Elizabeth Hall, 76, was due to be sentenced earlier this month after admitting two breaches of restraining orders.

But on the eve of her appearance she wrote to the police officer in the case saying she would not be attending in a bid to highlight what she described as ‘a false narrative’ against her.

Hall suggested she might instead go to Derbyshire for the weekend with the friend she shares her home with, adding: ‘This is unnegotiable and I am adamant I shall appear when this suits me.’

A judge at Birmingham Crown Court promptly issued a warrant for her arrest and Hall was brought back to the same court on Thursday, where she was jailed for 18 months and ordered to pay neighbour Christine Penny £500 in compensation.

Wheelchair user Elizabeth Hall, 76, was due to be sentenced earlier this month after admitting two breaches of restraining orders

The dispute between the pair started when Hall accused Mrs Penny of playing the 1968 Sinatra hit My Way too loudly at their luxury apartment block in Edgbaston, Birmingham, in 1996.

The bad blood included accusations by Hall that Mrs Penny pushed dog food through her letter box and flooded her property.

Judge Roderick Henderson said Hall had been the subject of restraining orders for the last three-and-a-half years but breached them at least seven times.

The court heard that in May, Hall posted what she said was a ‘newsletter’ to flats in her accommodation, including the address of the victim.

The judge added: ‘You described it as a newsletter as if it was something neutral. That was very far from the truth.

‘It was, in effect, a poison pen letter repeatedly referring to the complainant as framing her and perjuring herself in court. It is easy to underestimate how distressing and hurtful this conduct and continuing harassment can be.

‘There is a real risk or real harm to the complainant from this behaviour continuing.’

Hall suggested she might instead go to Derbyshire for the weekend with the friend she shares her home with, adding: ‘This is unnegotiable and I am adamant I shall appear when this suits me’

The judge told Hall she had lived an ‘entirely responsible and law abiding life’ until six years ago, when there was a ‘change’ in her behaviour which led to her ‘creating misery for your neighbours.’

Sabia Pathnan, prosecuting, previously told the court that Hall and the victim lived in the same block of flats and owned their own properties but were ‘on top of each other’ and there was a history between them. She said that, despite the restraining orders, Hall had twice gone onto the victim’s landing.

On the first occasion, on the day she delivered the ‘newsletter’, Mrs Penny checked CCTV and identified Hall. The second occasion was a fortnight later, after the victim the clatter of walking sticks outside and opened her door.

There was a confrontation and Mrs Penny warned Hall she was in breach of the order. The court was previously told that Hall had sent 53 emails and letters in breach of an order, made a number of false accusations and even targeted Mrs Penny’s plants as the feud came to a crescendo in 2016.

Some of the accusations were posted on a communal notice board during the ‘campaign’.

In July last year, Hall was sentenced to 12 months, suspended for 21 months, after being found guilty at a magistrates’ court of harassment and breaching a restraining order. In a victim impact statement, Mrs Penny said she felt she was being constantly bombarded and harassed by Hall.

Mrs Penny said her ordeal exacerbated her stutter and went on: ‘I feel like a prisoner in my own home. It has consumed my life.’

But Hall continued to protest her innocence and claimed Mrs Penny had been ‘using’ the Harassment Act against her and that had ‘trapped’ her.

She said she had had no intention of confronting Mrs Penny or causing a problem and wanted to keep away from her.

It is understood that Hall was arrested on Thursday morning after she returned to her apartment.

Following her sentencing, Hall was taken to Foston Hall women’s prison in Derbyshire – where child murderer Ian Huntley’s girlfriend Maxine Carr served her sentence for perverting the course of justice. A friend said that on her first night at the jail she had complained about the lack of a bedside reading lamp in her cell.

Mrs Penny, meanwhile, was simply relieved that her nemesis was now behind bars. ‘It is wonderful’, she said.

‘I would like to thank West Midlands Police for their support and their actions.’